on the night of 07th on the 08th May, I had good conditions: no wind, warm temperatures (about 14°C) and clear sky.

So I observed the area between Bootes and Ursa Major till midnight. After lot of nice galaxies I steered my telescope to Hickson 68.
The Galaxies around NGC 5350 in the vicinity of a pretty yellow and blue double star are a great few. Only the faintest galaxy NGC 5358 was imperceptible. After 20 minutes I had placed the stars and the galaxies NGC 5350, 5353, 5354, 5355 on my sketchpad.

It was one of the nights where I enjoy working with the Deep Sky observers Atlas by Gerhard Stropek. I traveled from galaxy to galaxy and simply enjoyed the light of the stars.

And so I hope that you like my sketch.

Markarian’s Chain superb spring object, this curved line of galaxies is my favorite part of the Virgo Cluster. I sketched 10 of them visible in the 16-inch telescope in small-town suburbia (naked eye limiting magnitude is about 5)

I noticed exactly 10 galaxies from the left:

Of course, the sketch doesn’t represent the field of view 72 degrees (22mm, eyepiece)- it was just sketched by moving the tube 😉 Power is almost about 82x

A clear evening sky with the moon not rising until around 11pm local time saw me out in the observatory with Hickson’s on my mind!

My targets were to be 97 & 98 which are found in Pisces just below the bottom right hand corner of the great square of Pegasus. I engaged in my usual process of ‘star hopping’ the scope from rest position to my target. The smaller the hops, with ‘re-syncing’ at each stop the better my chance of hitting small and faint objects.

…Hickson 98 listed as having NGC 7783 as a searchable member my software database told me it wasn’t listed, so I had to slew the scope manually onto the coordinates given and then search for a suspect galaxy group when I got very close, this didn’t turn out to be too difficult and I soon had the 4 members forming a chaining with a few stars on the monitor screen. A star bright enough to display diffraction spikes headed the chain to the north, all very neat and attractive. It turned out that all 4 members are NGC 7783 A-D so that is likely why I could find it; I probably needed to enter the full nomenclature to find it in the database.

Notes:
More than 25 individual members of this impressive Galaxy Cluster could be observed in a rich Perseus milkyway starfield and were recorded on this sketch during a timespan of more than 3 hours.
In particular the area around the massife Seyfert galaxy NGC 1275 was a visual adventure with faint galaxies popping up in the eyepiece!
For more details on the observation & overview of the individual galaxies: check www.deepskylog.be
Clear skies!
Tom

A brief window to observe the deeper sky was taken tonight as it was clear, dark early and with the moon not due to interfere until around 20.30ut.
As has become the norm, I was intent to grab another of the 100 Hickson groups, but before I did this and as Altair (Alpha Aquilae) was a stop off on my hopping progress up into Pegasus I took a look into Mark Bratton’s excellent Guide to the Herschel Objects to see what was local. I picked up on NGC 6781 which is a beautiful mag 11.8 planetary in Aquila with plenty of exquisite detail to enjoy. Compared to M57 the Ring Nebula in Lyra it is relatively large and faint, yet not so faint that it isn’t visible in smaller, say 8” telescopes, I feel it is more akin to the Helix nebula, though considerably smaller at 2.0′ diameter.
At 16.8 magnitude, the central star (a white dwarf) is clearly seen just off centre in my sketch, made using the 500mm mirror, Watec 120N+ video camera of course! Sketched in pencil on white and then inverted on the computer.
No time to spare, one sketch in the bag, yeeha!, with the Moon getting ever closer to the horizon, I pushed onto Hickson 99 there are 5 members in this group which is located just SW of Alpha Andromedae (Alpheratz) in the square of Pegasus.
(A) member UGC12897 mag 14.8 is extended N-S with a star on its southern tip. (B) UGC12899 is round fairly bright at mag 14.7 with a brighter nucleus. I find (C) PGC 58 to be the most interesting, it is a barred spiral and despite being only mag 15.6 I was able to see and capture arm structure in my sketch, amazing J (D) & (E) members PGC 60 & PGC 57 respectively at mag 17.1 & 17.6 are merely tiny smudges to the south of the 3 main members.
I was very pleased with this short and productive observing session, time to close up and return to the family & gardeners world indoors!
Dale

Do you want to know more about my interest in astronomy? If so take a look at my Website: http://www.chippingdaleobservatory.com/

NGC 4889 is the brightest galaxy in the Coma cluster. The view one gets in a larger telescope (I used an 18″ f/5 Dobsonian) is stunning. At least a dozen galaxies could be seen definitely, several more were assumed. The field almost showed as many galaxies as stars. NGC 4889 itself is pretty bright with a significantly brighter nucleus, slightly elongated in WNW-ESE. Sky conditions were good but not perfect, I logged a faintest star of fst 6m4 in Virgo. The magnification of the sketch is 94x. Beside the observation the identification of all seen galaxies was quite demanding. Hopefully, they are all correct.

A bitterly cold night that saw the mercury drop to the lowest level I have ever known or recorded -16?C. I wanted to get an early observation in before Moon rise; my primary objective was to add another Hickson group to my list. This I did successfully with very appropriately HCG 28, I say appropriate as this was the 28th that I have observed and sketched. Located in Eridanus there are 4 faint members in the group although my sketch actually includes a 5th galaxy which isn’t a member and is depicted as a faint star. All members have PGC listing the faintest & smallest (d) member is Mag 18, so serious stuff! The commanding member is a nice edge on PGC 15136 running N-S, see my sketch here
Quite how I came to observe the next object I’m not quite sure? I may have noticed it close by on my planetarium software, not that it matters, it was an interesting and valuable observation. Again in Eridanus, NGC 1535 is a lovely planetary nebula, named ‘Cleopatra’s eye’ by Greg Crinklaw aka ‘The Skyhound’ a name that appears to have stuck and grown in popularity. I had observed this planetary back in 2010 with the old 350mm F5 and older first generation Watec camera, but this was my first visit with the 505mm mirror. It did show an improvement, despite the lower focal length employed on this occasion, I used a barlow lens previously to increase image scale and try and pull out more detail, I had failed to resolve a faint star on the very northern edge of the nebula, the central star was easy and steady as were internal annular ring structures rather like those in the ‘Eskimo’ nebula.
Here is my old sketch with the 350mm and here is the latest with the 505mm. At the time of writing I have asked Sue French if she would be so kind as to help assist me on finding the outer stars mag.
Happy days, Dale

Do you want to know more about my interest in astronomy? If so take a look at my Website: www.chippingdaleobservatory.com 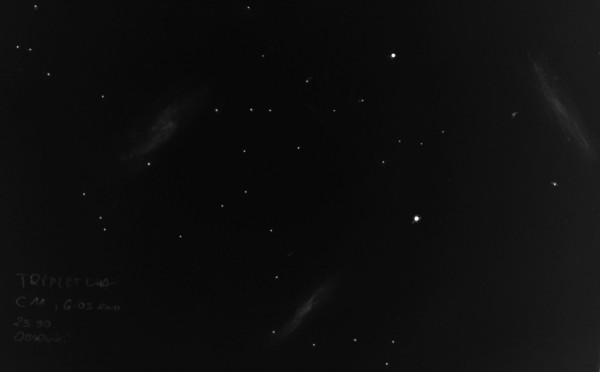 The Leo Triplet – three galaxies M65, M66, and the NGC 3628.
It is a small group of galaxies located about 35 million light years away from Earth

Apparent Magnitude of the members is from 9,3 -10,4mag 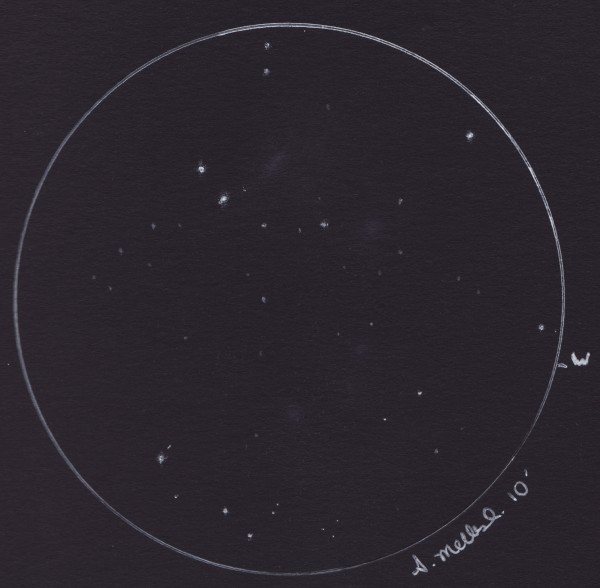 This was quite a nice collection of galaxies in Gemini that viewed well in the 56cm dob.

The brightest member of this group is NGC 2294, as is quite evident in the sketch.
Descending to the right is NGC 2291 a diffuse mag 14.0 galaxy, followed directly below about 6′ by two
quite faint and small galaxies NGC 2289/2288 which are only some 2′ apart.

This was a fairly faint group, but they were not overly challenging from a dark sky site.

I do not know whether any of these galaxies are in interaction, but looking at some DSS images of this
group it seems unlikely. 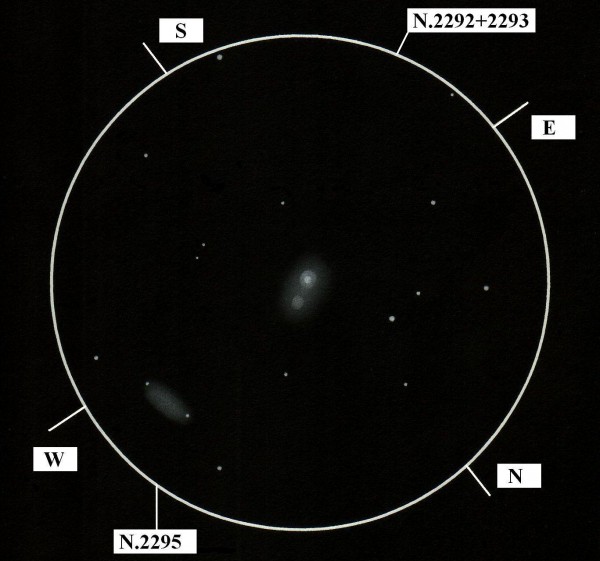