I always have issue to find Uranus, without GoTo, it’s not so easy…and I don’t like facility…
Thinks are moving in our planet system. It’s why “planetos” in Greek means “vagabond”.
So I use the opportunity of this double conjunction just a week from each other to find Uranus and its so nice colour.
The Venus-Uranus separation was 5.2’ Venus was 10’000 more brilliant than Uranus, while the separation between Mars and Uranus, one week later was 16.25’
The faint K star between Mars and Uranus is HIP 4325 mag=9.5, so no Uranus satellites were visible with my material.

I sketch the two fields on white watercolour paper with inverted method using a chromatic wheel, orange for Venus, blue for Mars and crimson red for Uranus then I just have to invert the two sketches after scanning. The deal is to manage the colour values in inverted mode.

Clear sky to you all, and for some of you I wish you a nice eclipse on Mart 20.

Object Name (Uranus with moons)
Object Type (Planet and satellites)
Location : Observatoire Astronomique de Bauduen, Provence France
Date 2014 Dec 11th
Media (graphite pencil, and inverted watercolor on white paper, Paint.net for the inversion)
That’s maybe because I like to use this great telescope, or it’s because I like challenges but,… it’s certainly not the best optical combination for this observation.
On 11 December, I finally found a corner of pure sky above the 24-inch reflector made by Olivier Planchon. To observe Uranus, the speed is definitely too high: f / 3.3 d, so we had to use very short focal EP to reach the useful magnification (Nagler 3.7 and 2.5) !.
If you look at my watercolor you can see a somewhat elongated comet hair that diffuse around the planet, that’s exactly how we see the planet area in the field, this is probably linked to a not 100% perfect collimation, but still. I get the impression that the work of collimation facing these big tubes, it is not a piece of cake.
Anyway, we can say two things:
1- We observed three of the Uranus satellites: Oberon, Titania and Ariel, this last one being a bit lost in the lights of the planet
2- the disk of the planet was not uniform as seen in a small telescope or some photos. It’s very difficult to confirm, but a diffuse zone clearer was observed in the upper atmosphere of Uranus, is that an artifact, I do not know? Anyway the main direction of the area is not in the direction of the cloud bands of Uranus.

Another composition of this observation is given here: http://astro.aquarellia.com/croquis/uranus_page_h.jpg 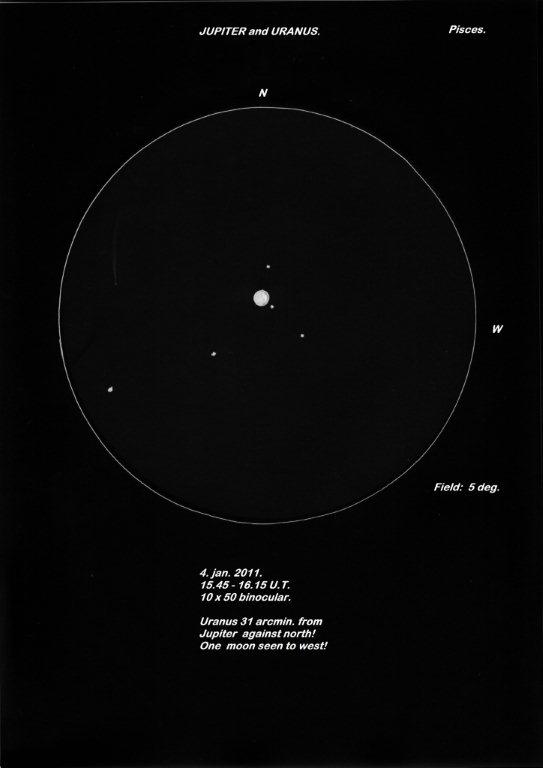 Hey, and Happy New Year to all!!

It was very interesting to observe both planets, Jupiter and Uranus so close together as 31 arcmin.
I could see only one Jupiter moon to west in my 10 x 50 binocular.
The sky was very clean, 0 deg. C, and no wind or other interference.
I did not see the partial eclipse in the morning , but I enjoyed this conjunctione!

Best wishes from Per-Jonny Bremseth. More info on my sketch!

The data of the drawing:
Jupiter & Uranusz 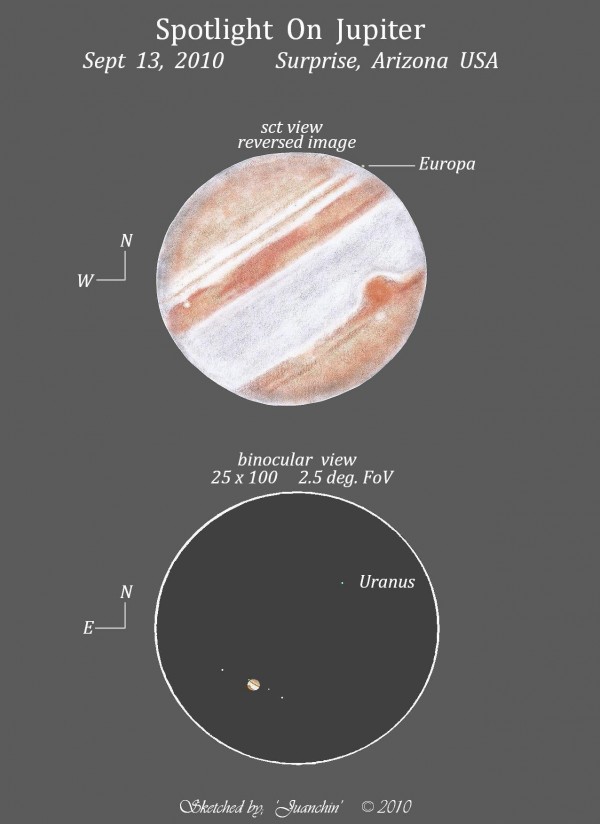 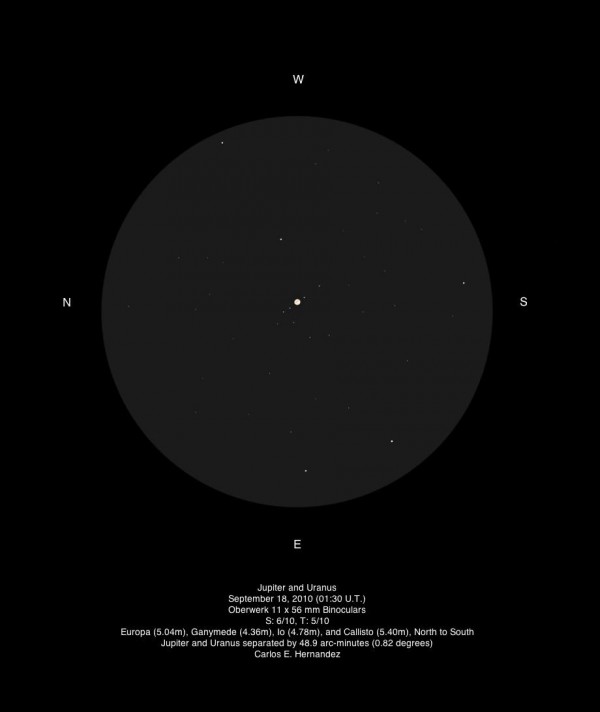 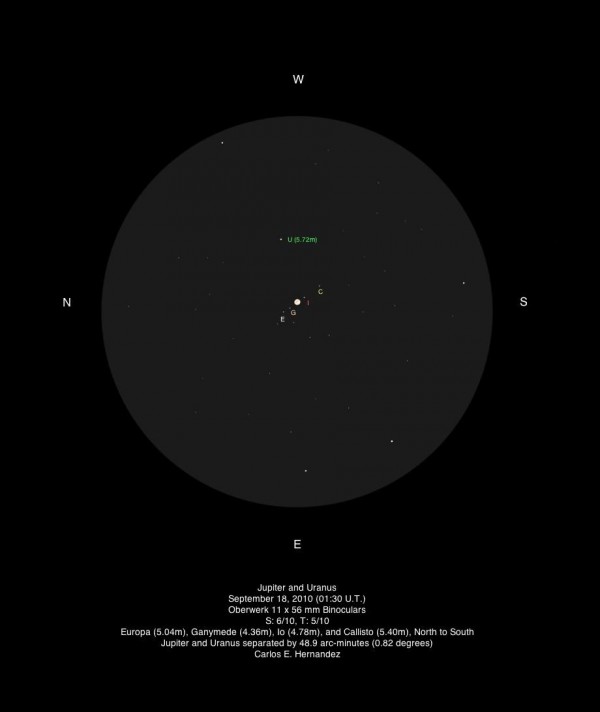 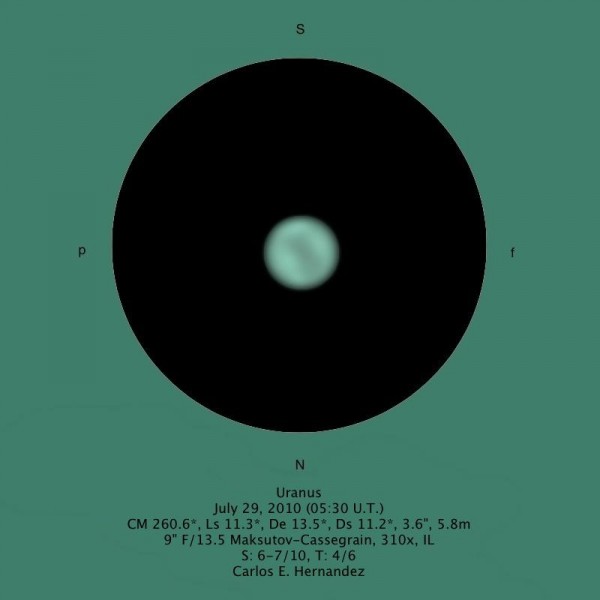 I made an observation of Uranus on July 29, 2010 (05:30 U.T.) using my 9-inch (23-cm) F.13.5 Maksutov-Cassegrain (310x). The small pastel green (or teal) disk of Uranus was very sharp at even higher magnification but I chose to examine it at moderate amplification. The center of the disk appeared to exhibit a faint dusky to dull (4-5/10) bar with a brightening (6-7/10) over the polar regions. These faint albedo features were not easy to detect but patience at the eyepiece allowed me to detect them. I hope that everyone gets a look at the Georgian planet.

A digital image produced in Pixelmator. 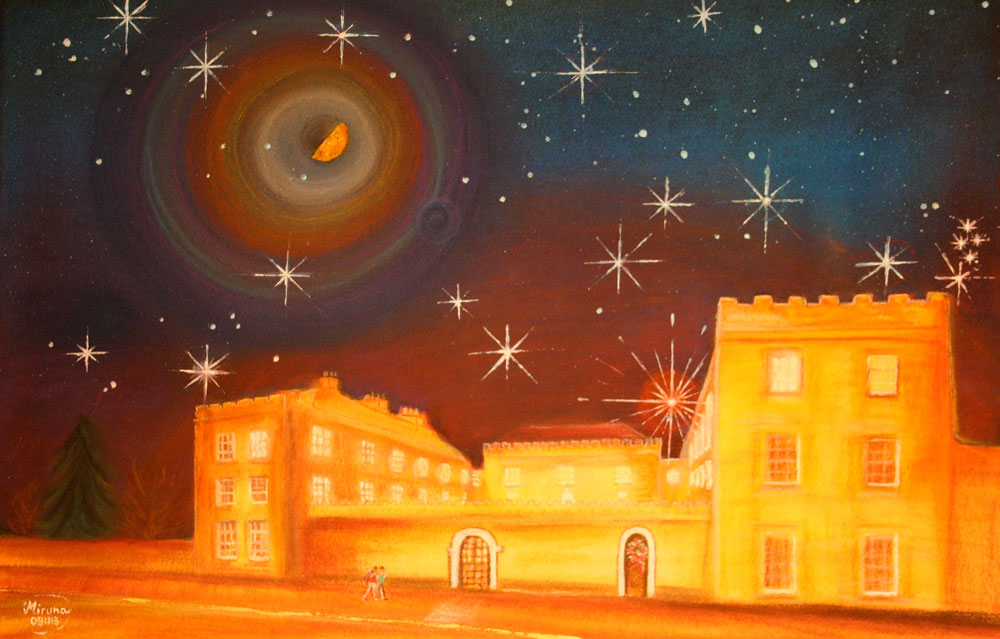