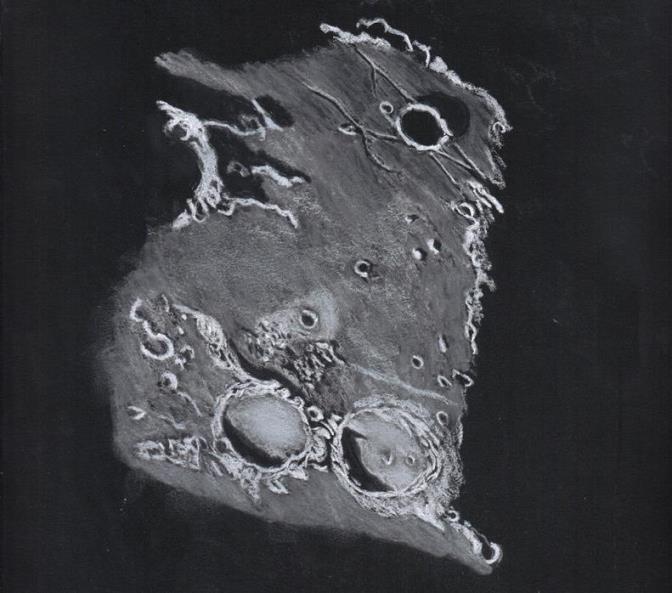 After another canceled public telescope viewing Friday evening due to thick clouds and light snow, I was pleased to see a nice Saturday filled with sunshine followed by a clear night.

With no particular sketching targets in mind, I scanned the terminator for interesting sketching targets and stopped when I could see sunrise at Ramsden (26 km.) along with all those crisscrossing rimae (rilles).

Northeastward away from Ramsden and across Palus Epidemiarum, I also added two additional ancient craters Mercator (49 km.) and Campanus (49 km.).

This break in our poor Chicagoland spring weather was long overdue.

As the evening progressed the sky became mostly clear with some ground fog adding to the light scatter and the inevitable falling temperatures of an early spring night. Nevertheless, it was good enough for some observing and sketching. Crater Theophilus (100km.) was more than 450 kilometers from the terminator but remained an attractive target in the eyepiece as the Moon cleared a nearby building in my southeast.

Theophilus is a complex Erastothenian era crater at just over 1.3 billion years in age with large central peaks of deep crustal material that formed on the rebound from the initial impact. The appearance looks fresh when compared to its much older Nectarian period neighbor Cyrillus (100 km.). It was evident while observing this pair that Cyrillus was showered with ejecta from Theophilus and prior millennia of countless strikes by incoming rocks from space. The central peaks of Cyrillus are smaller, more muted and worn down. 300 kilometers to the west of Theophilus the Apollo 16 astronauts Charles Duke and John Young collected 96 kilograms of rocks over 3 days back in 1972 which included some ejecta from the Theophilus formation.

Remote sensors on the orbital spacecraft Chandrayaan-1 detected Iron rich Magnesium –Aluminum oxides on the central peaks of Theophilus adding to the knowledge of the composition to the deep lunar crust as indicated by a publication last spring.

Two other craters included in the sketch are Mädler (29 km.) also of Erastothenian age and Ibn-Rushd (34 km.) an ancient one at more than 3.2 billion years. 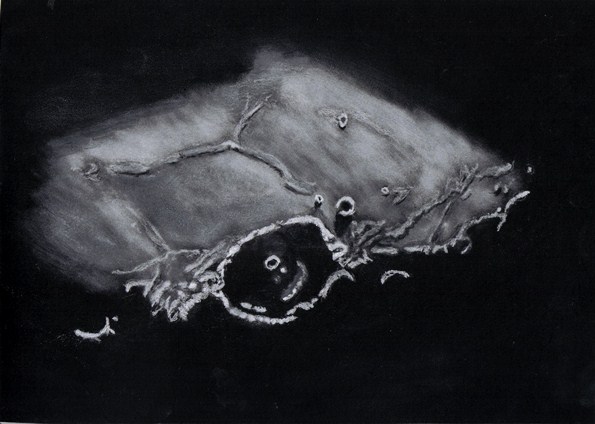 With the first clear night in more than one week, I was able to catch the sunset across crater Posidonius (99 km) at the northeastern edge of Mare Serentatis. Posidonius A (11 km.) , the highest of the small central peaks and the tilted and uplifted concentric ridge were the last features catching the light at sunset inside the rim. Also visible and included in this sketch was the northern most portion of Serpentine Ridge. As temperatures were falling throughout the night, I found myself stopping to warm my hands indoors not once but several times. The lunar viewing was excellent this night.

Sketching:
For this sketch I used: black Strathmore 400 Artagain paper, white and black Conte’ pastel pencils and a blending stump.

Both of these craters look similar when their floors are in shadow as was the case when I viewed them. Lansberg (40 km) is a walled plain crater sitting where Mare Insularum meets south Imbrium. This old impact dates back to the Upper Imbrian and is near the center of my sketch. Reinhold (49 km) is a prominent lunar impact crater of the Eratosthenian period and is also on Mare Insularum. It is below Lansberg near the bottom center of the sketch which by direction is north as per the inverted Newtonian telescope view. At the top of the sketch (south) I was able to catch the Riphaeus Mountains receiving first light during this waxing gibbous phase. 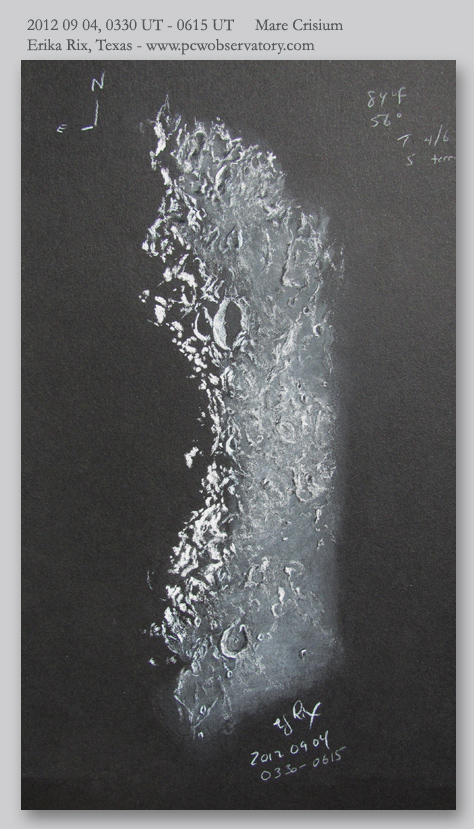 The evening started off with DSO hunting while waiting for the Moon to come up, even though the stars were and faint galaxies were starting to wash out from the moonlight rounding the eastern horizon. I started a sketch of M12 that will have to wait for another night to complete when the Moon isn’t so much of a factor.

Once the Moon rose between two short junipers behind me, I switched to black paper and scanned the terminator. Mare Crisium looked like it was taking a bite out of the Moon. I’ve always been a bit intimidated at sketching rough terrain, but took a stab at it nevertheless. Sketching in the highlights makes it incredibly easier in fast moving areas such as along the terminator. The trick is to have very sharp pencils at hand, and I made sure of that during set up before it got dark outside – although I did have to resharpen once or twice during the session (as well as stand up and stretch.) It was a rush against time to render the basin’s western edge before the shadows swallowed the view.

I began with the inner ridge line along the terminator, marking each highlighted crest individually with a very sharp Conte’ pastel pencil. Then as quickly and accurately as I could, started working my way west, alternating between the Conte’, charcoal, Derwent and oil pencils, focusing first on the highlights, then the shadows, followed by albedo.

Of particular interest, Crisium sports the crash landing site(although not visible from last night’s lunar phase) of the Soviet’s Luna 15 in 1969 and the landing site of Luna 24, 1976, when soil samples where successfully brought back to earth.

This was my first time observing the Moon with the AT6RC and once seeing sharpened up, the views were crisp and clear with good contrast. It’s especially good that we’ve never had to collimate this scope and I’m looking forward to trying it out on Jupiter soon.

On this evening, two days past full moon and with favorable libration on the eastern portion of the Moon, I chose two irregular maria targets for sketching. Mare Spumans was completely visible while Mare Undarum was only partly exposed beyond the terminator.

Although I have examined these little ancient “lakes” in the past this has been my first attempt to capture them on paper. Both are surrounded by bright, densely cratered upland and are close enough to Mare Crisium to be within its eject blanket and basin rings.

This is a very attractive region of the Moon for sketchers with craters Langrenus and Messier and Messier A nearby and Mare Crisium just to the north. I purposely kept these features out of my view to focus on lesser observed targets. In addition to the maria subjects, craters : Webb (22 km.), Apollonius (53 km.), and Firmicus (56 km.) provided eye catching targets across the view.

For this sketch I used: black Strathmore 400 Artagain paper 9″x 12″, white and black Conte’ pastel pencils and a blending stump. After scanning, Brightness was decreased just slightly using my scanner.

I was in Mesa, Arizona for a few days and on the evening of Tuesday May 22, 2012, at 8:45 pm (local time) I was treated to a fine view of the Moon and Venus before they set in the West Northwest.

A sliver of the Moon was illuminated by the sun and the remainder lit by the gibbous earth (earthshine), a real treat for a mid-westerner like myself. I had some sketching materials with me so I made this sketch of the view on this warm evening 37°C (98°F).

Venus was at waning crescent phase on 2 weeks from its solar transit.

Knowing that we fell within a good band to view a partial portion of the annular eclipse, Paul and I scoped out the local county roads earlier in the day for optimal horizons. The partial eclipse for our location was due to start at 1932 ST (0032 UT) which would only give about 50 minutes of eclipse viewing before sunset. The skies cleared up and we were fortunate to have perfect viewing conditions that evening.

I started off drawing the full solar disk in h-alpha. Four active regions lined up east to west with two more to the south (depicted to the top of the first sketch in the animation). I then made a quick second sketch to use for recording the times and placements of the Moon as it passed between Earth and the Sun.

First contact was at 0032 UT. The first marking was at 0035 UT. I set my iPhone’s timer to go off every five minutes until sunset, marking the Moon’s progress each increment with my oil pencil along with the times. In between, Paul and I would alternate using a pair of solar glasses from solarastronomy.org and the views from my double-stacked Coronado Maxscope 60mm h-alpha telescope.

The first image of the animation shows the original sketch in its entirety. Later, I used the second solar disk sketch as a reference to recreate the eclipse on the original sketch with a cut out circular piece of black Strathmore paper. This animation is the result.
http://i201.photobucket.com/albums/aa201/ErikaGRix/20120520-animation.gif

As the solar disk became too dim to view (represented in the last couple frames of the animation), I was forced to leave the eyepiece and enjoy the last several minutes with the solar glasses and my camera.

Link to gallery of individual sketches within the sequence.

During the time I observed, a very large prominence off the northeast limb was enlarging and in the process of ejecting as it broke free from the magnetic fields supporting it. I’ve never visually witnessed that large of a prominence breaking away from the Sun before. What really stunned me was how bright it remained over several hours that far off the limb. I grabbed an 8-sketch sequence spanning over 6 hours of the event, not including the full disk rendering I recorded earlier in the day. The last 35 minutes of my session, the prominence became very faint and diffuse. I stopped seeing any connection from the limb after 1717 UT. Of course, that doesn’t necessarily mean there wasn’t, but was perhaps too faint for my tired eyes to see.