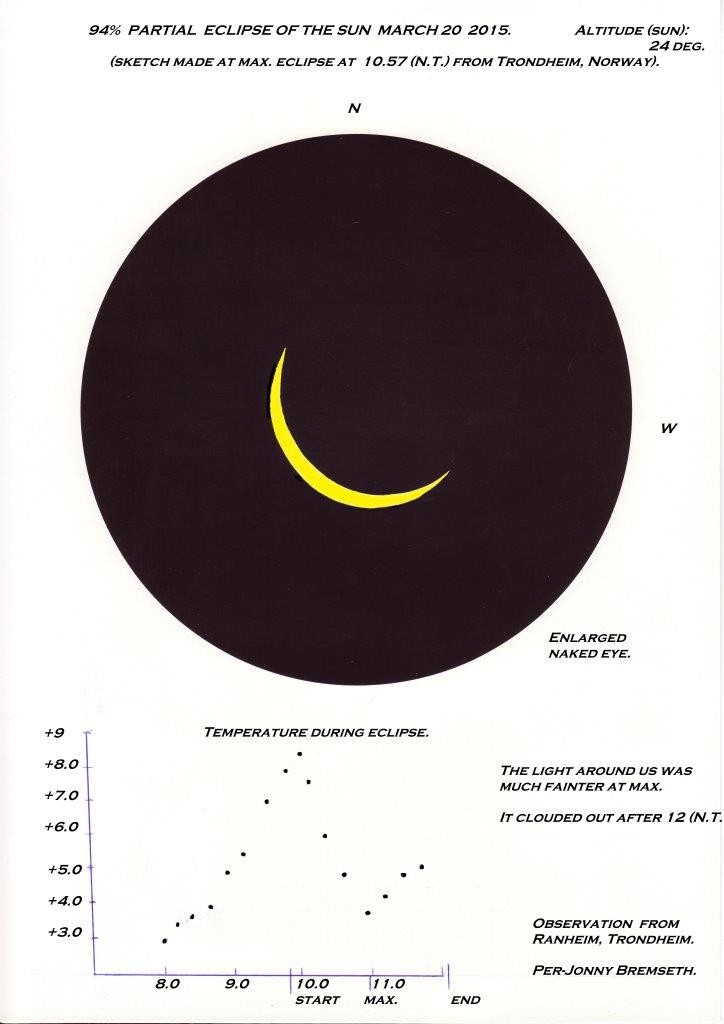 I send you the great eclipse of the sun from Trondheim, Norway.
with 94% of the sun eclipsed!
I also measured the temperature (in shadow) before and during
the eclipse. The sky was clean until just before the end of the partial
phase. I enjoyed the max. partial phase very much. Beautiful!!!
I used crayons (watercolor) on black paper.

Hey, I send my drawing of a solar eclipse in August 2008. Eclipse was seen in Poland as a partial. In some parts of the world, it was complete. Since we have completed four years of this beautiful phenomenon, I want to bring these beautiful memories. Although the phase of maximum eclipse in Poland amounted to only about 40% of it was my najpiękniesze of solar eclipses. In Poland Psary eclipse started at 10:55, then there was a phase maximum at 11:49 and at 12:43 finally eclipse ended.
Hours are given during the summer in Poland. Despite the lapse of four years, still treasure the unforgettable moments for which I thank God.
Thanks and best regards

Two weeks ago, I went to Japan to observe a solar annular eclipse. (My hometown is Korea.)

This picture shows the moment of eclipse before and after.

Location : Asakusa, Tokyo
(The other side of the river, The world’s second tallest building ‘SkyTree’ tower is visible.)

Knowing that we fell within a good band to view a partial portion of the annular eclipse, Paul and I scoped out the local county roads earlier in the day for optimal horizons. The partial eclipse for our location was due to start at 1932 ST (0032 UT) which would only give about 50 minutes of eclipse viewing before sunset. The skies cleared up and we were fortunate to have perfect viewing conditions that evening.

I started off drawing the full solar disk in h-alpha. Four active regions lined up east to west with two more to the south (depicted to the top of the first sketch in the animation). I then made a quick second sketch to use for recording the times and placements of the Moon as it passed between Earth and the Sun.

First contact was at 0032 UT. The first marking was at 0035 UT. I set my iPhone’s timer to go off every five minutes until sunset, marking the Moon’s progress each increment with my oil pencil along with the times. In between, Paul and I would alternate using a pair of solar glasses from solarastronomy.org and the views from my double-stacked Coronado Maxscope 60mm h-alpha telescope.

The first image of the animation shows the original sketch in its entirety. Later, I used the second solar disk sketch as a reference to recreate the eclipse on the original sketch with a cut out circular piece of black Strathmore paper. This animation is the result.
http://i201.photobucket.com/albums/aa201/ErikaGRix/20120520-animation.gif

As the solar disk became too dim to view (represented in the last couple frames of the animation), I was forced to leave the eyepiece and enjoy the last several minutes with the solar glasses and my camera. 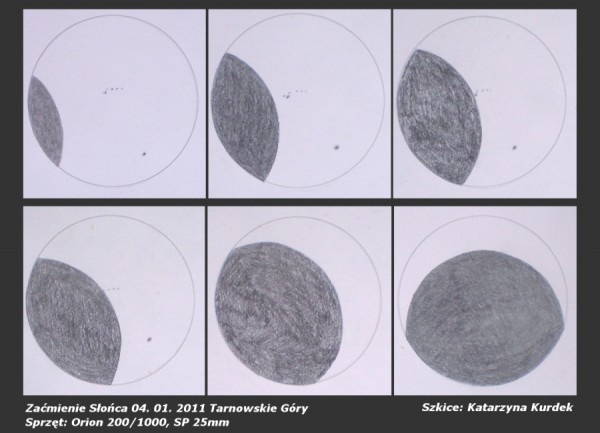 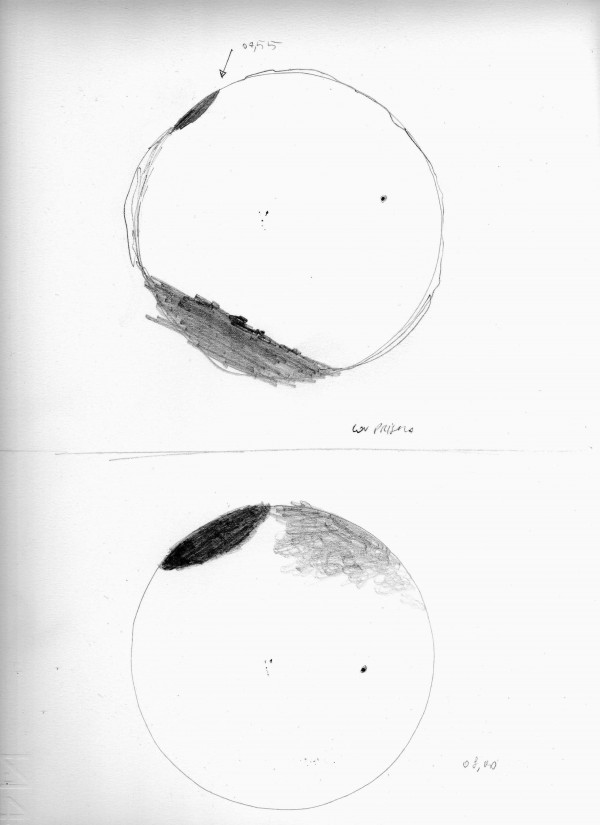 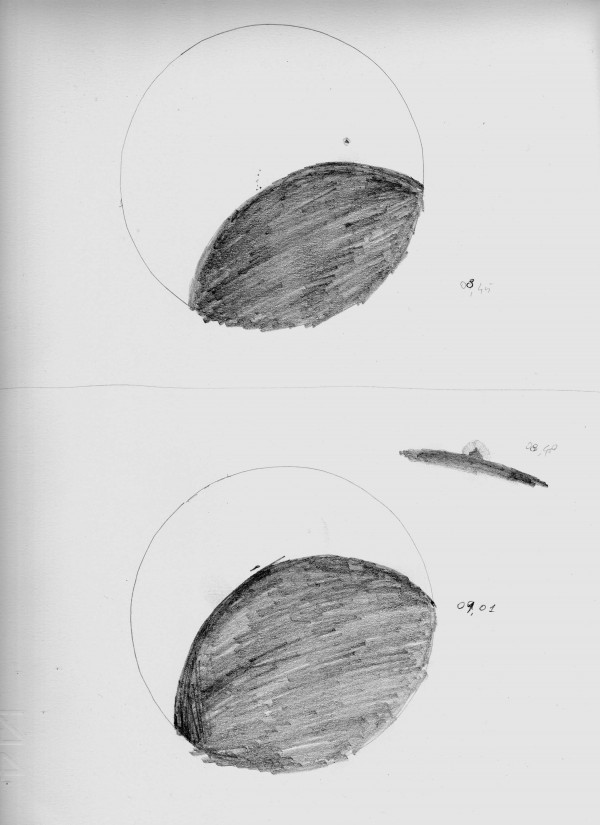 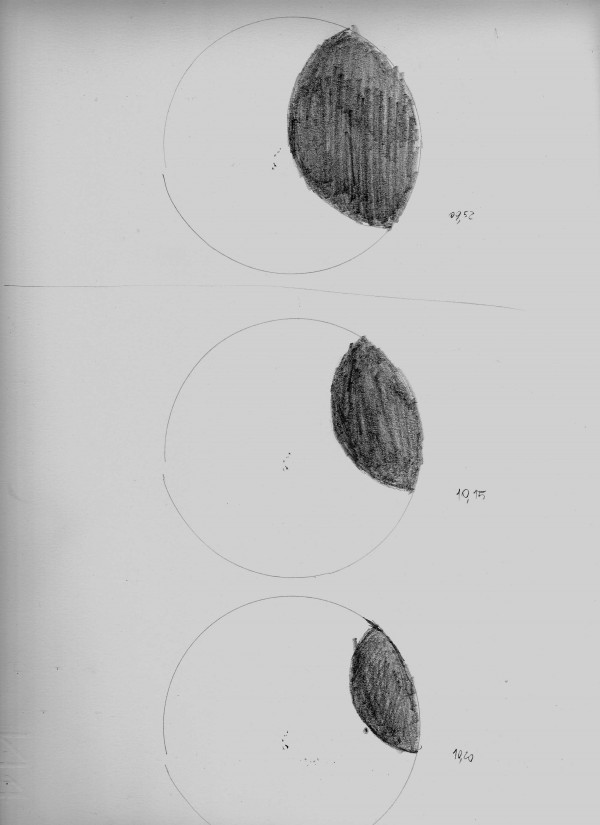 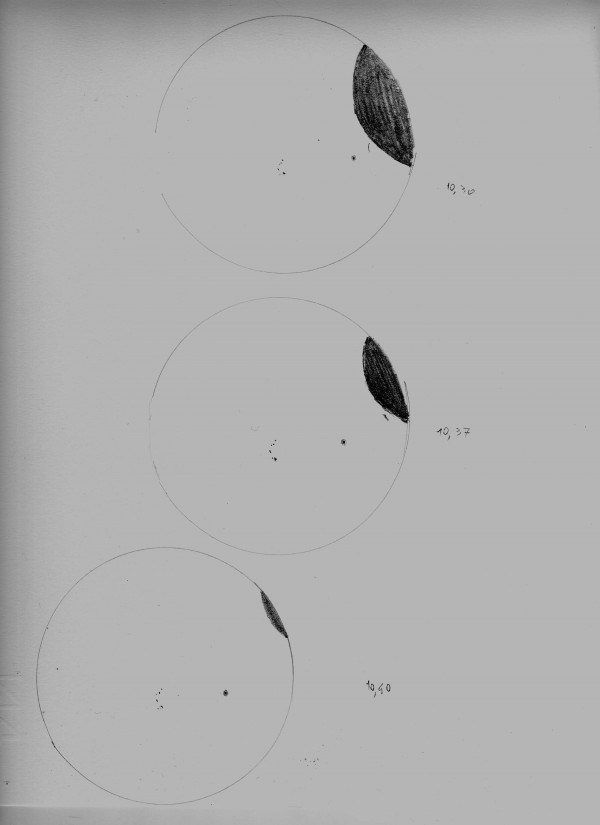 Hello sketchers,all o.k.?This morning i have see one great astro phenomenon of 2011:The partial eclipse of our star!
Me and my friend Gianni go to little town of Montesecco,5 Km from my home and at 500 m of altitude.
I have the horyzon free to east,beautyfull vision of sunset.
I have my refractor Kenko 80/1000 with astrosolar filter,my friend his digital camera.
I draw the first sketch before eclipse at 7,48 a.m.
The eclipse start at 7,54 a.m. ,the sun only just rise.Incredible was the sensation of cold wind and blue light at the moment of maximum.

I make my sketches only quarter of hour until 10,40 a.m. when the eclipse end.
Thisis the first rough sketches copy,i sent you nextly the fair copy of that.
At next sketches,ciao!
Giorgio Bonacorsi.