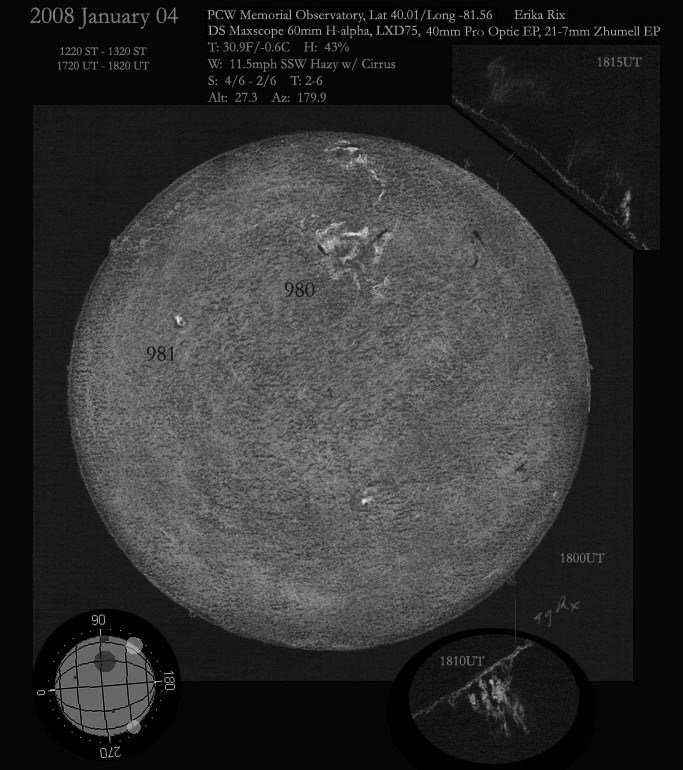 It was a beautiful sight today with the Sun gleaming off the snow. The snow was
melting fast as the temperature was slowly rising. Unfortunately, the snow didn’t
melt fast enough off the observatory roof, so I had to just drop down the upper part
of the southern wall and leave the roof completely on, otherwise, I would have had
to deal with water dripping on my gear in the observatory. As it turned out, it was
a good way to keep the winds at bay today, plus I’m sure kept me warmer in the more
enclosed space.

There were four very bright plage areas on the disk in h-alpha. One from NOAA 10981,
another large intricate plage structure for 10980, then a very thin bright one that
reached over to 10980 just inside the Eastern limb. The final was toward the West. I
could see a dark “spot” being cradled by the plage in 981, and by viewing in white
light, there was most definitely a small pore that appeared almost elongated. With
all the haze today plus winds during my white light filter session outside of the
observatory, it was difficult to tell if this elongation was another very tiny pore
just beside the larger one, or if it was just blurred from the conditions outside.
In any case, both to the NE and the SW of this dark dot were faint markings
resembling contrast of faculae. I couldn’t confirm what the markings were with this
observation. 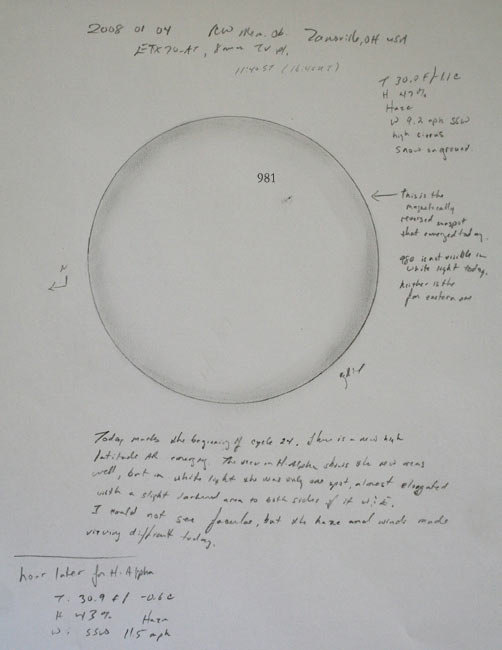 In white light, I could see no other evidence of active regions.

Getting back to h-alpha in the observatory, there were six areas of prominence
around the limb that I could see. With the haze and poor seeing conditions, I had to
wait for moments of clarity and steadiness to get good definition for closer looks.
Patience definitely proved to be valuable today.

The prominence to the SE just below the AR980 was very faint and fan-like. To the
very southern portion of it, it became brighter. I could almost make out all the
connections to each section of it.

Then at the western limb, slightly to the south was a very sharp brighter prominence
with several fingers reaching out like flames. I really enjoyed this one.

The show stopper of the session was most definitely the plage with a few dark thin
filaments looking as if they were separating the plage in AR980 and onward to the
eastern limb.

One thought on “Fire and Ice”