Not up to the quality of recent CCD images but something I certainly found pretty
exciting Abell 70 and friend in Aquila. I know that Abdrew Robertson has taken a look
after I shared this with him, so I hope that it inspires other too.

Here is my blog that accompanies the sketch:

I have been ‘told’ reminded and prompted regarding my lack
of astronomical activity this summer! I hold my hands up, guilty as charged I
cry, there are a couple of short tales from the sky that I have failed to share
here, but in general, I have been off elsewhere! Playing harmonicas, painting, and
drawing watching bands, associating with hot rodders in my truck, playing with
bee hives, building large garden structures and generally having a good time!
OK I get the message, astronomy is not for neglecting and I feel guilty so I’m back
and will make every endeavour to keep it that way.
With a stiff talking too from my friend Keith on Sunday
evening ringing in my eyes, the clear Monday evening sky forced me into the
observatory, the cob webs were incredible; it took me a while to clear the
worst of them. I set up the scope, plugged in the leads, opened the stiff roof
sections and pointed the scope skywards. It was only dusk, but I was eager to
make amends for my inactivity, I didn’t have a target in mind, so I thought
something bright, a revisit perhaps, to ease myself back into things. I flicked
through a few of the books on the shelf for inspiration, the scope was supposedly
pointing at Altair in Aquila, so something in that constellation would be good,
short hops would keep things accurate, I thought.

Nothing so far, until I looked through Kepple and Sanner,
last image for Aquila was Abell 70, no pencil tick on it so I hadn’t observed
it previously, mag 14.5 the text said hmmmm… hardly a bright object but well
with ‘scope’ excuse the pun.
OK target object decided upon, I went indoors for my evening
meal and got back into the obsy around 20.00. I got the scope aligned on Altair,
focus was out I tweaked that, so was collimation, I tweaked that, but really
another pair of hands were needed so it certainly wasn’t spot on, but it would
do! The sky was hazy, certainly not a great night. I hopped to Abell 70 aka PK
38-25.1 via a couple of brighter stars, re-syncing at each stop. Another short
slew and I turned up the camera gain and dialled in 15sec exposure and there it
was, small in the 12’ x 12’ fov, a truly round and fairly faint ring nebula,
but what was that going on along one side, it looked like an edge on galaxy,
with a core considerably brighter that the shell ring nebulosity of Abell 70. I
looked up Abell 70 on the web and sure enough there was a distant back ground
galaxy designated PMN J2033-0656 that made this observation, unusual and
special. I increased the cameras exposure to my max of 20 seconds and made a
sketch, the increased time exposure pulled out the central star, tiny but sharp
it also showed up another star close to nebula that I wasn’t able to see at 15
secs. I didn’t use the usual BAA observing form to sketch and
record rather reaching for black art paper and rendering the ghostly ring and
galaxy using white watercolour pencil and blending stump.
I was delighted at this observation after anticipating a ‘soft’ option for my return,
I was back with a bang, catching a new object with an unexpected added attraction!
Boy I have missed this observing malarkey, thanks to all who have given me stick
over not observing

Do you want to know more about my interest in astronomy? If so take a look at my Website: http://www.chippingdaleobservatory.com/

Hi all! I present to You a sketch made by a 9yo child, Her name is Wiktoria Janowska. I met Her at the Zelow Observatory a couple days ago. She’s very, very clever n lovely little woman. Well, sometimes her fantasy dominated over realism. She saw a lot of details, maybe a little too much 😀
I hope You like it 🙂 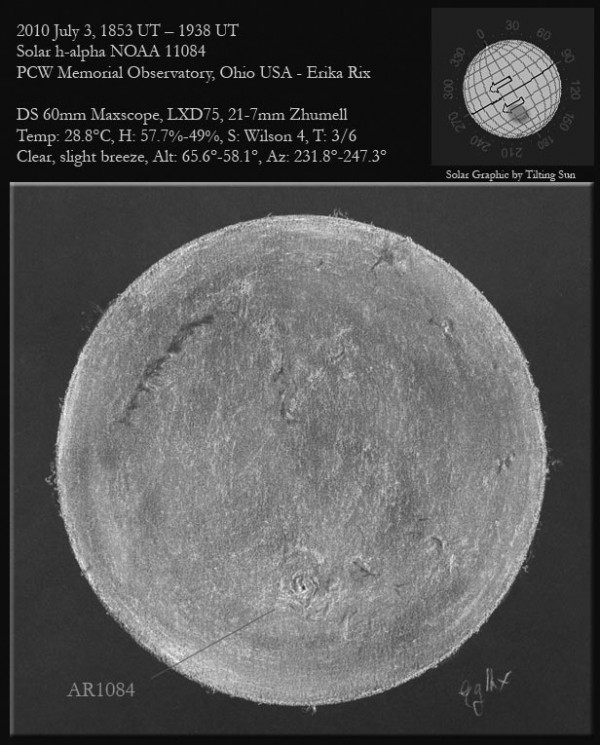 It appears that I missed seeing a dual pair of CMEs (coronal mass
ejections) on the Sun today. It took at place at 1154 UT. My session
began at 1853 UT. Fantastic footage of it can be seen here by SOHO
coronagraph.
http://www.spaceweather.com/swpod2010/03jul10/cme_c2_big.gif?PHPSESSID=kljak6da6ng8ifu6v1gf6p7ch3

AR 1084 still looks like a spiral galaxy (or a chicken eye with the wide
yellow/pink skin wrinkled around the pupil). A fantastic
filament/prominence reached over the limb in the SW. The filament was
thick and fibrous reaching out to the west and on either end, long and
slender.

Riser, my regular solar buddy, aka 14-year old Rhodesian Ridgeback, took
a pretty hard fall today and had to watch me observe from a distance in
the comfort of the shade at the top of the hill. He’s resting
comfortably now on a very thick duvet. Poor ol’ boy. 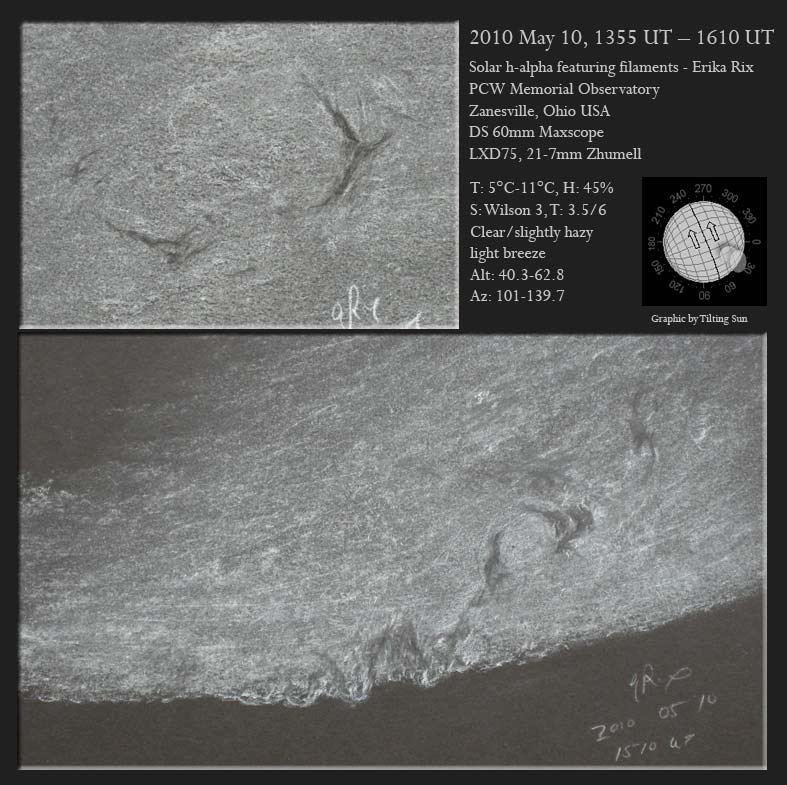 Paul had a late night imaging so I brought the dogs outside with me, puppies included, to keep it quiet in the house for him. This, of course, meant lots of extra paws running around the observatory floor instead of just the steady snoring of Riser, my regular observing buddy. The views were shaking so badly that I finally gave up and tore down the rig, resetting it back up in the grass. I should have done that to begin with I suppose since seeing wasn’t the greatest and would have been a lot worse in the observatory, especially with the temps rising so quickly after our freeze last night.

There were quite a few features to concentrate on, but what really caught my eye were two areas of filaments in the NE quadrant. The transparency and seeing were just poor enough that I really struggled with pulling any detail out of the prominences on that section of the limb. I didn’t want to miss out trying to capture them as they reached inward across the disk, forming a beautiful display of soft looking filaments. Then even further inward reaching toward the center, the details were sharper with the next set of filaments. 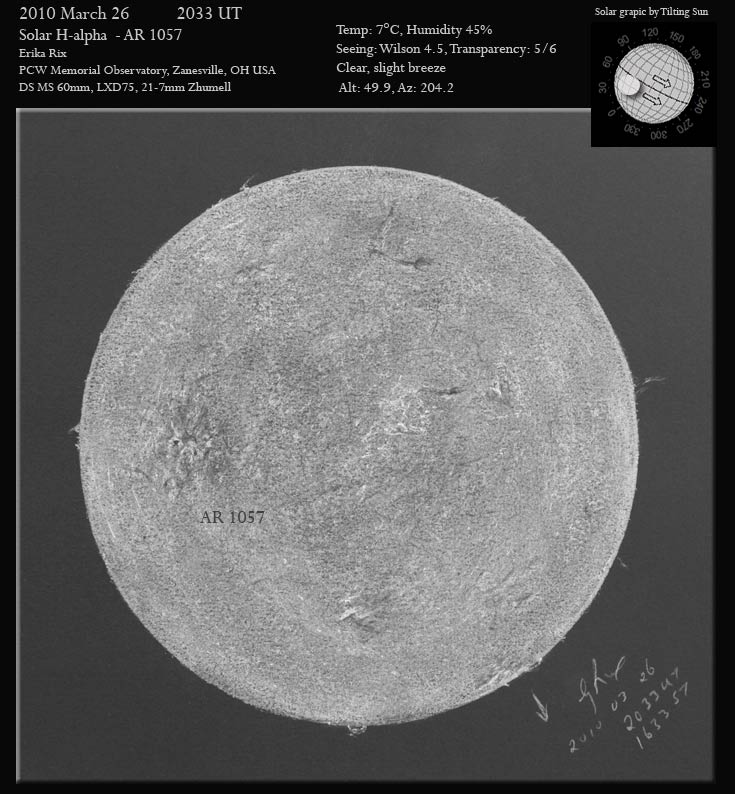 SW prominence at first glance looked detached. Increasing mag and waiting for steady seeing, I could make out fainter portions of the prominence that reached the limb. There were a few brighter prominence regions scattered about, but nothing of great significance, especially after the magnificent NW prominence last week.

AR 11057 stood out immediately with two dark areas and bright plage. Panning the FOV brought out another bright plage area on the WNW area just 10 deg in from limb. This could possibly be a remnant of 11056. Toward the southern-middle of the disk, brighter little clusters of plage scattered the area, as well a plage to the NW about 40 deg in from the limb. There were a few filaments but the one that really caught my eye was a wide V-shaped one to the SE. I had to tweak the Etalons to bring out the full structure of what first appeared as a single line of filament. 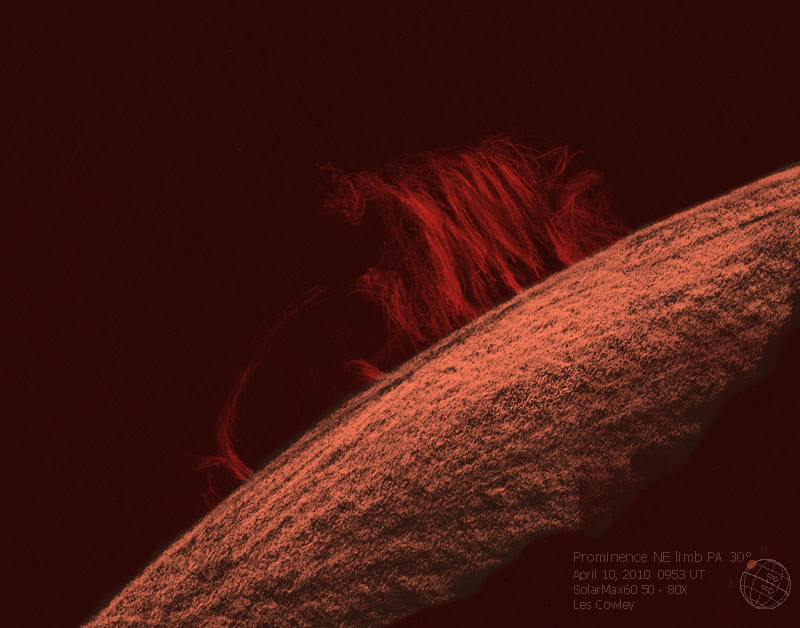 For at least three days April 8-10, 2010 a large and ever-changing prominence rotated into view over the Sun’s NE limb. Its extent in solar longitude must therefore be considerable. Here is its appearance 09:00 UT on 10th April. Sketched directly at the eyepiece of a Solarmax 60 single stacked H-alpha scope 50 – 80X. Daler Watercolour, Studio and Drawing pencils on black Camford paper. 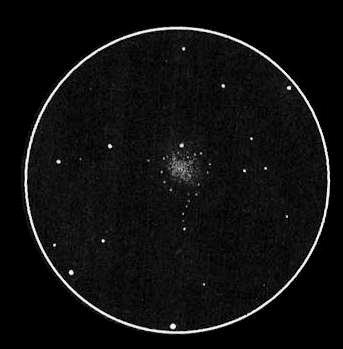 This is a mid-sized bright globular. At 150x it is finely resolved but the central region is not completely resolved. Even at 50x it is relatively well resolved. The level of concentration is rather weak. The bright central region looks pointed in three directions just like a maple leaf. The southeastern side of the center has not such extension but the outline is sharp with four stars shining outside it. A bright star off the northern side stands out. There is a conspicuous line of stars which encircles the edges of the globular and extends further to the south. This line of stars is clearly seen in photographs. This globular is full of interesting characteristics. 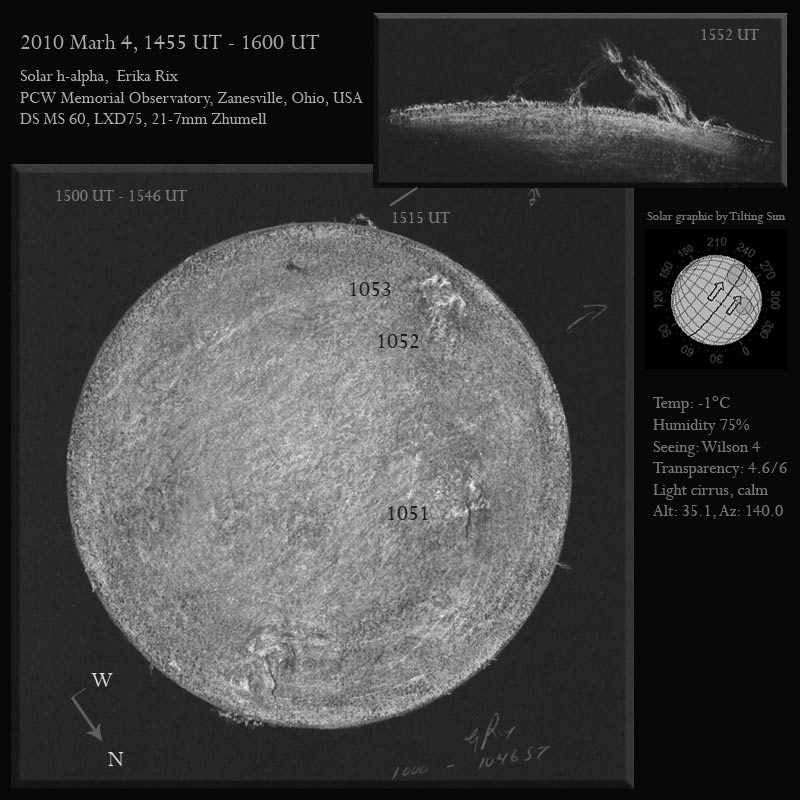 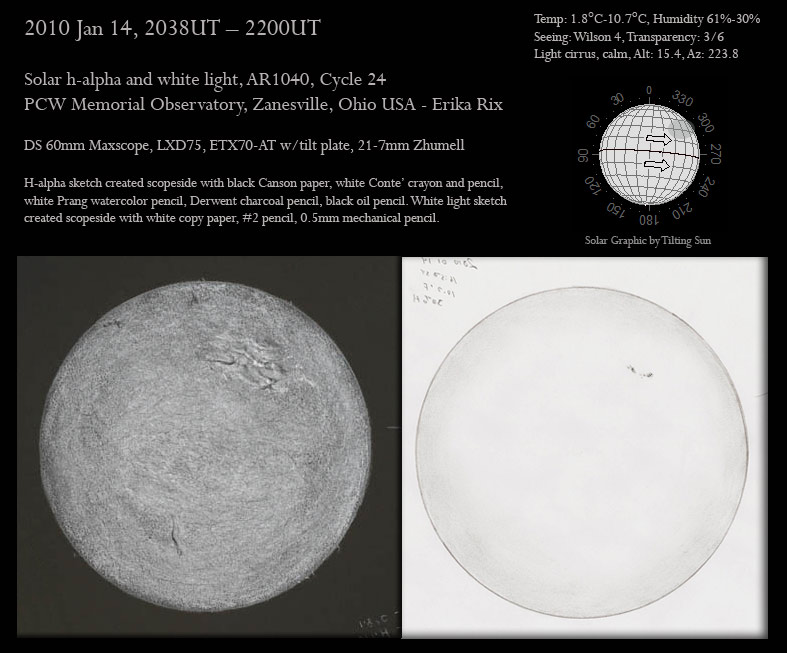 Sketches were rotated and flipped to match standard solar orientation. West is to the right and north is to the top.