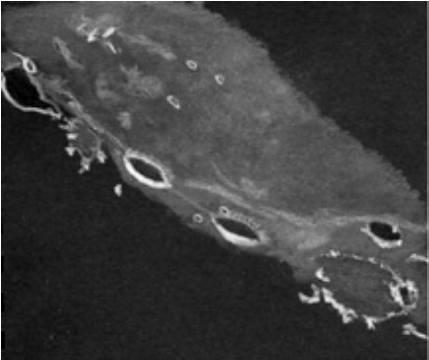 The upper crater of the pair is Cardanus named
after Girolamo Cardano 1501-1576 an Italian
mathematician.
This is a crater 49 Km in diameter, terraced with a
small central peak. Below is Krafft named after a
German Astronomer Wolfgang Ludwiig Krafft 1743-
1814.
This is a crater of 51Km diameter with a flooded
floor. To the lower right we see the bright illuminated
rim of the flooded plain Eddington named in memory
of the Cambridge astrophysicist Arthur S Eddington
1882-1944.
This sketch was made using black & white hard
Conte pastels on black Daler Rowney paper with
bright highlights made with a Derwent watercolour
pencil.

This image and caption appeared in the LDAS Newsletter 2008-10.doc
Permission to use this image was given by the artist and author Dale Holt

One thought on “Craters Cardanus & Kraftt with the flooded plain Eddington”