find attached a charcoal and pastel sketch of Aristarchus, Herodotus and the famous Vallis Schröteri. I hope you like it.

The Aristarchus Plateau, the lunar crater Aristarchus and environs – October 5, 2014[/caption]The Aristarchus plateau is one of the biggest and most spectacular volcanic regions in the Moon. With good seeing and the Moon high above the horizon, the region was impressive on October 5th, when it was near the terminator. Vallis Schröteri, the giantic lava channel meanders through the plateau starting from the famous Cobra Head vent, which is now mostly under shadow. The Aristarchus crater has a very bright wall with two dark bands; and to its north, Rupes Toscanelli stands out nicely. Finally, to the south of the plateau, the Herodotus Omega dome is easy to see, thanks to the oblique illumination.

Objects viewed through Celestron Ultima 8 SCT with binoviewer around 250x with fairly good seeing. The individual peaks near the terminator were especially bright. What really struck me were the two wrinkle ridges at the top and bottom that seem to end in craters (but not quite) I had difficulty sketching the brightness range so used a little help from Iphoto to get the highlights back to how I saw them. Because of the amount of objects included, the sketch took longer than usual and some shadow lengths from one end of the sketch to the other would reflect the time difference. Just catching all the turns in Schroter’s Valley is very time consuming. As it was, I still couldn’t capture all that I saw. This was a most intimidating region to sketch.

What’s an astronomical sketcher to do at full moon? These are actually good times to catch rare details on the lunar limb, and here I have caught three of the valleys on the south-western limb of the moon close to the crater Inghirami, which in turn is just south-west of Schickard. These valleys are radial to the Orientale basin and created by the same impact. Vallis Inghirami is the easiest to spot by virtue of its proximity to the crater of the same name, whilst Bouvard is also striking by virtue of its greater elevation and length. Baade is harder to pick out because it’s behind Vallis Inghirami and mostly hidden behind its own rim. This dramatic landscape mirrors the cataclysmic event that must have created it about 3.5 billion years ago. 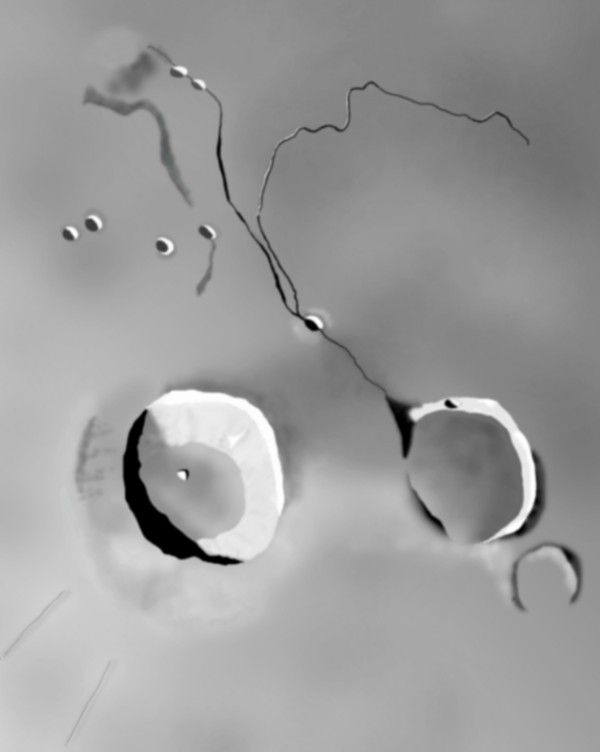 I usually sketch in some detail at the scope (mainly HB and 2B). I then scanned the result into Photoshop and use a Bamboo Pen graphics tablet to remaster the sketch. The final sketch was then “blurred” a touch to simulate the actual view which is never as sharp as I would like to see!)

Observational date: I use a Nexstar 8SE teamed with a Hyperion 8-24 mm zoom. Most of the sketch was at the 16mm stop with occassional use of Barlow and was drawn in moderate seeing conditions. The moon was 13 days old.
I could see the main circular formation with the hint of rays in SE. The crater had high walls although I could not see the terraces. The flat floor had a smallish central mountain. Herodotus was prominent to the W. Vallis Schroteri could be seen N of Herodotus by a craterlet called ‘the Head of Cobra’. The valley ran towards N then W.
Chris Lee 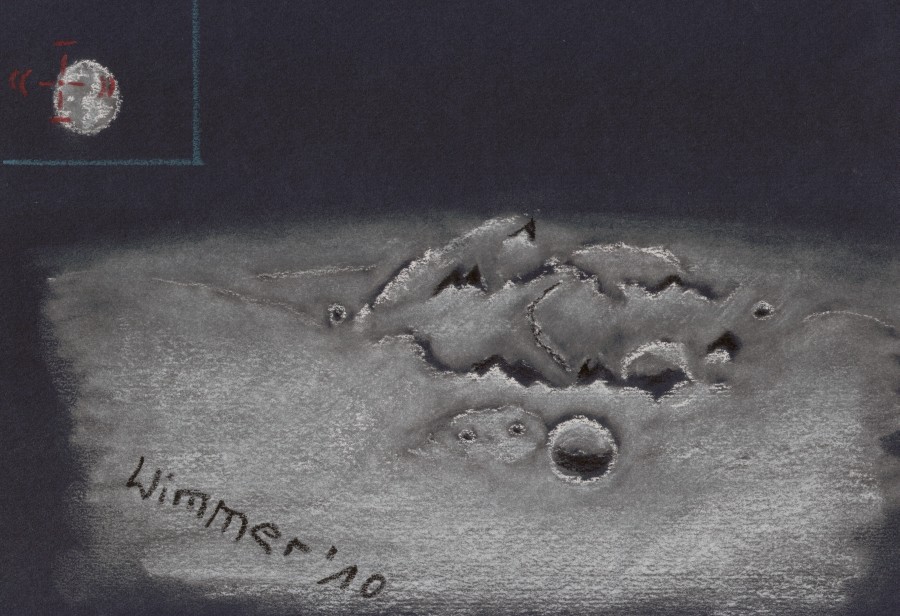 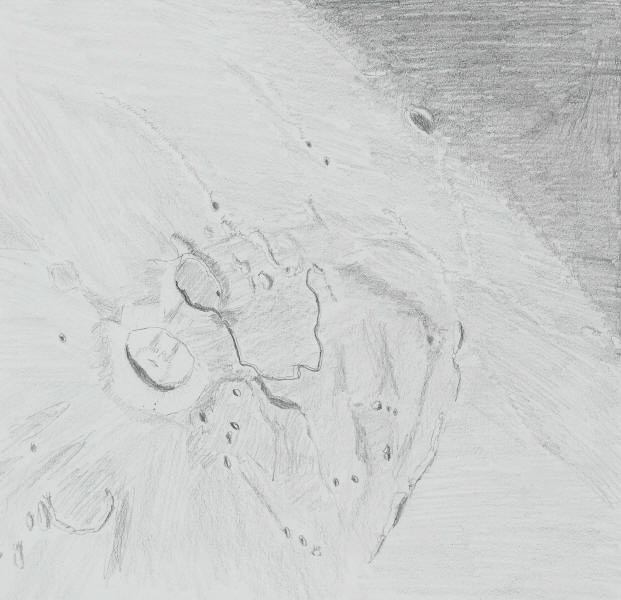 The Aristarchus plateau
Sketch and Details by Peter Mayhew
Hover cursor over sketch to view labels.

A lovely bright day 12 moon hung in the southern sky just before and after sunset. The terminator was just to the west of the Aristarchus plateau. Having saved and saved this for sketching for months, I gave in and did it. The clouds kept rolling across the moon interrupting me; first low thick stuff, and later high foggy stuff. But by 9.30pm I had got most of the visible features on paper. It wasn’t the best night for seeing, but was tolerable. The plateau is a volcanic shield about 200km square, in the North West of the Ocean of Storms. It breaks all sorts of lunar records; the brightest crater (Aristarchus), the longest sinuous rille (Vallis Schroteri), the most coloured spot “Wood’s spot” (the shield itself). Aristarchus itself appears bright white, especially the area to the east. Surrounding the ejecta slopes is a dark melt band, and then rays can be seen extending east, north and south. The crater itself has a central hill and a dark band surrounding that, as well as darker bands on the western crater wall. North-East is the ghost crater Prinz. Herodotus is an older, flooded crater, which seems on initial inspection to be the source of Schroter’s valley; the view is deceptive because of the notch in its northern wall and the dark surrounding land. The valley itself is sufficiently broad to distinguish either wall, and winds first north, then west and finally south, narrowing as it goes. The north-west of the shield is guarded by the long mountain chain Montes Agricola. Mons Herodotus lies to its south. The western area near the terminator is crossed by wrinkle ridges. The area is so complex that it was a real struggle to take in all the detail that was there: for this reason I’ve dubbed it the “shield of confusion”. I suspect another visit with better seeing conditions will bring out new features. 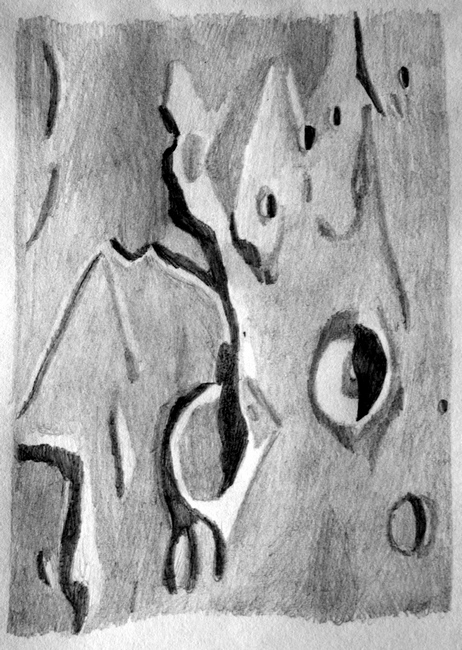 here is a sketch about Crater Aristarchus and Herodotus with Vallis Schröter.
The seeing was poor on this evening but the transparency was acceptable. 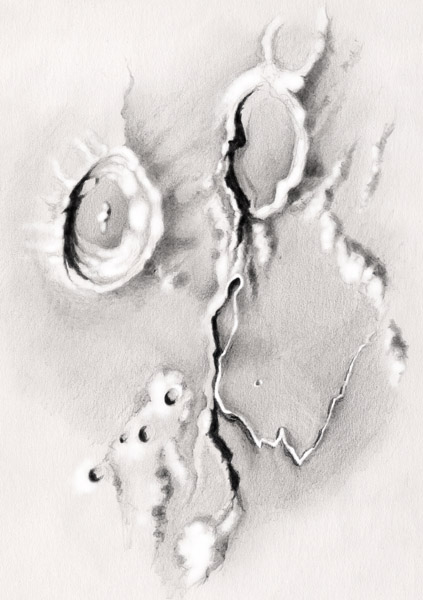 Vallis Schröteri is the largest sinuous valley on the Moon. It makes its start at a 6 km diameter crater just north of Herodotus crater and widens to 10 km. This area is sometimes referred to as the Cobra’s head. It then winds 160 km and narrows to 500 m at it’s end. The rille is likely the result of volcanic activity as a lava flow carved its winding path through the landscape. 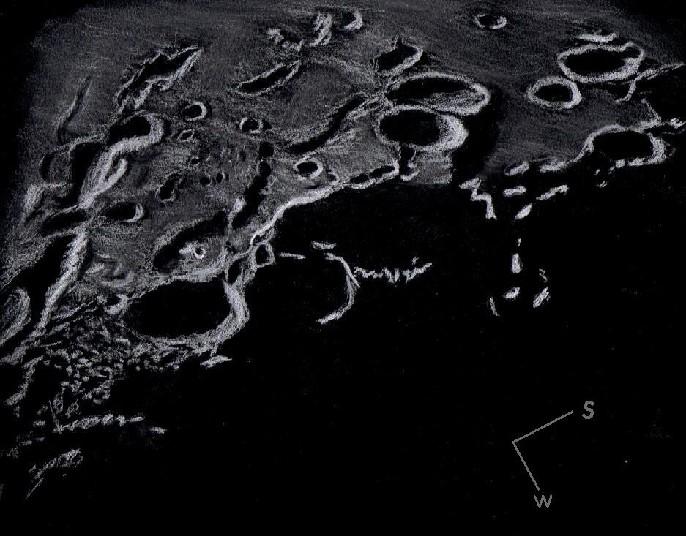 Fabricius and Janssen
Sketch and Commentary by Frank McCabe

On this evening of observing the young, spring, crescent moon just past nightfall, I was preparing to sketch crater Santbech when my eye was drawn to the terminator region of the Vallis Rheita and on south. Back in February of this year I caught this region at a time near sunset but this evening I was looking at an opportunity to capture an interesting crater rim illumination as long as I began drawing quickly. Along the terminator to the south of the valley is Nectarian crater Metius. This 90 kilometer cavity was completely in shadow except for its rim which was well displayed in morning light. Immediately south-southwest young 80 kilometer crater Fabricius was also displaying most of its rim. What captured my attention to this area initially was the way the light was illuminating the shared arcing walls between Fabricius and its neighbor Jannsen. The Jannsen component of this illuminated arc appears to be the centrally located slump block that dislodged at the time of the Fabricius forming impact (see: The Modern Moon by C. Wood page105). To the east of Pre-Nectarian crater Jannsen the paired craters Steinheil (70km.) and Watt (68km.) were putting on a show of their own. The shadows demonstrated the greater depth of Steinheil when compared to Watt. Finally on to the south along the terminator crater Rosenberger C at 48 kilometers marked the end of the large crater collection along the terminator in this sketch.