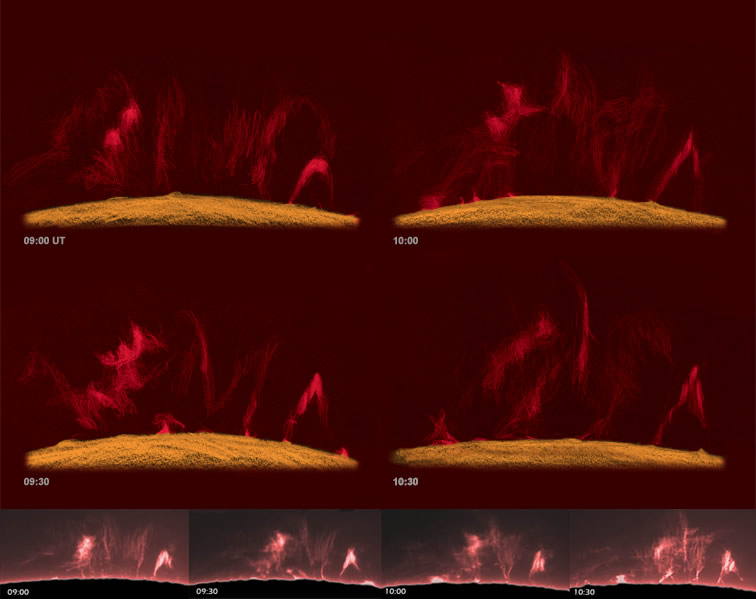 The Sun is an ever-changing target. In H-alpha light, prominences light and
dim, shift and change literally by the minute. Fascinating to watch and
sketch but just how accurate are drawings grabbed in a few minutes during
variable seeing and under a black hood?

May 7th was an opportunity to find out when Cloudy Nights held an
“International Day of the Sun”. Expert UK photographers Peter Lawrence and
Nick Howes suggested imaging or sketching a prominence every 30 minutes on
the hour and half hour!

The day dawned clear and after breakfast the selected prominence was viewed.
It was the ugliest assortment of filaments, clouds and loops that you could
imagine with parts changing and dancing about even as you watched. The
‘scope was a Coronado Solarmax60 mounted on a manual altazimuth. Seeing
started fairly good so I used an 8mm Radian, I need eyeglasses to sketch and
the Radian gives enough eye relief. The drawings were on A4 black Canford
paper filling half the sheet per sketch with Derwent Watercolour pencils
used sharp and dry.

Serious observing started about 8 minutes before each time mark with the
main proportions starting to be put in 5 minutes before the mark. Then finer
and finer details were quickly added, not in any order just wherever good
seeing happened to show them. This quickly brought the time to the mark and
then the whole view was assessed for accuracy. It was changing so fast!
Finally 3-5 minutes after the mark were spent getting the relative
intensities right and generally tidying up.

By 09:45 there were frequent periods of superlative seeing and I changed to
a 5mm Radian and clutched the dark hood around close to shield the daylight.
For long periods (but never, ever during the allocated 10 minute slots!) the
visible structures were exquisitely resolved into delicate stacked filaments
with even those sometimes doubling and breaking into knots – you would need
an hour or hours to capture all that! After 10:30 the seeing deteriorated
and that combined with not a little fatigue ended the sketching run.

Pete Lawrence was imaging some 150 miles to the south with about the same
seeing conditions. He used a Solarscope SF-70, a Rolls-Royce of H-alpha
filters. His images for the same times are on a reduced scale at the base
but you need to see the originals (http://www.digitalsky.org.uk/ and Cloudy
Nights) to really appreciate their superlative quality.

So can sketching such ephemeral objects ever be accurate? I’m still
deciding. There is maybe a tremendous amount to be leaned from a careful
comparison of sketch fragments with simultaneous photographs about how the
eye-brain interprets fine details and tends to join others into spurious
larger structures. If some of that can be understood then hopefully it might
improve the sketching accuracy.

2 thoughts on “The Sun, Pencils or Camera?”