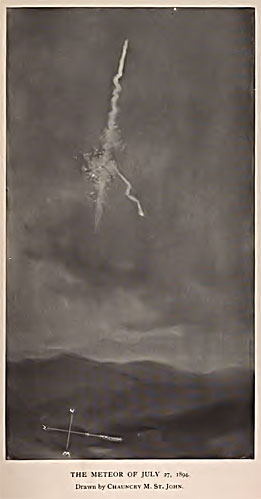 A great number of observations of this splendid meteor were received at the LICK Observatory, either directly, or through the kind offices of Hon. A. S. TOWNE, Hon. C. F. CROCKER, Hon. R. THOMPSON and others. Some of the best were not available till the middle of October. Very complete observations of the meteor’s position and appearance were made at Mount Hamilton by seven observers. Professor AITKEN of the University of the Pacific sent the only complete observation received here, viz., the altitude and azimuth of the meteor when it exploded, and the same co-ordinates of the point where it disappeared. Many good determinations of the point of explosion were received, the best being those of Professor FRIEND (Carson), Mr. CARLETON and Mr. BURCKHALTER (CHABOT Observatory), Mr. GEORGE BRAY (Santa Clara), Mr. W. B. JOHNSON and Mr. STONEROAD (Merced), Mr. HERROLD and Mr. HERRING (San José). Drawings of the brilliant cloud left by the explosion were received from Professor SCHAEBERLE (Mount Hamilton), Mr. JOHNSON (Merced), Mr. STEWART (Visalia); and excellent accounts of this cloud from Dr. O’BRIEN (Merced) and others. A beautiful and artistic water-color drawing of the phenomenon has been presented to the Observatory by Mr. CHAUNCEY M. ST. JOHN, which represents the general appearance in a most satisfactory way. The determinations of the place where the meteor disappeared were not so satisfactory, the reasons being, no doubt, that everyone’s attention was riveted on the cloud left by the explosion, and because the meteor divided into two portions near the end of its course.

When the last reports were received it was possible to fix with considerable precision the point where the meteor exploded. This point is in the zenith of a place about half a mile south and about half a mile west of the N. E. corner of T. II E., R. 8 S., M. D. B. and M. The explosion took place when the meteor was a trifle over 28 miles above the Earth’s surface.

College Park and Mount Hamilton (R. H. T. and A. F. P.) report that it moved south in falling.

The meteor disappeared before it reached the Earth. The fragments produced by the explosion were probably volatilized by the time they reached a height of some 6 miles above the Earth’s surface. It is hardly likely that any large fragments reached the Earth. If so, they should be sought for within a circle of some 12 miles in diameter, whose centre is the point previously described. If the observations of the point where the meteor disappeared had been more accurate, the place of the fall would have been better determined.

The meteor was seen by several observers long before it exploded—probably when its height was over 70 miles. The position of the radiant-point is R. A. 16h 0m, Declination +34°.5.

With these data I have calculated the orbit of the meteor. As the data are (in general) not very precise the elements of the orbit are but approximate. The orbit is assumed to be a parabola. The elements are:

The meteor was then a little nearer the Sun than the Earth it was near perihelion, and moving in an orbit inclined some 20° to the ecliptic.

The Regents of the University have authorized the printing of a pamphlet on this subject, which will (in due time) be sent to our correspondents. This pamphlet will also contain the observations of the August meteors of 1894 made by Professor SCHAEBERLE at Monte Diablo, and by Messrs. COLTON, PERRINE and POOLE, at Mount Hamilton.

From The Publications of the Astronomical Society of the Pacific, Volume VI, 1894, pages 268-270 at Google Books

One thought on “Down a Jagged Path”