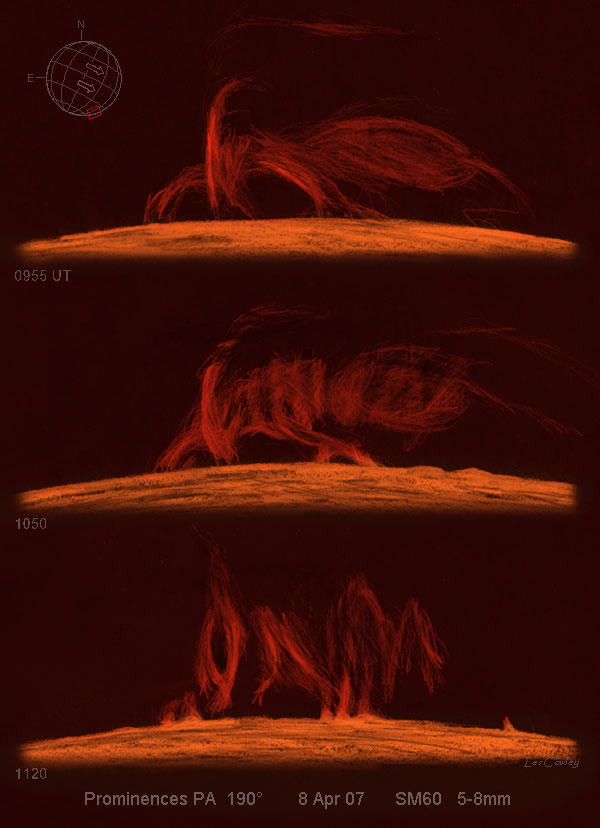 We sometimes imagine that clouds take on the shape of creatures.  These
prominences on the south limb of the sun on Sunday 8th April ’07 have been
similarly likened to a firebird, an ostrich, a wasp and a feeding spider.
When actually trying to sketch prominences it is better not to imagine such
things or else the drawings will tend to drift irresistibly towards the
imagined beasts!

These prominences were in any case very difficult to render.   They were
changing literally from minute to minute and were also ‘upside down’ in the
eyepiece.   The changes were so great that I started to wonder whether I had
got their structure at all correct but later comparison with images taken at
about the same time were reassuring.

Observed from England through a single stacked SolarMax60 H-alpha ‘scope at
50-80X.   There were varying amounts of high altitude cirrus haze but some
moments of high contrast clarity and atmospheric steadiness.   Sketches were
made large on A4 Canford black cartridge paper using white Derwent Studio
and Derwent Watercolour pencils, the latter dry.   Coloration was done in
Photoshop, this was the only modification made to the sketches after leaving
the eyepiece.

One thought on “Solar creatures?”