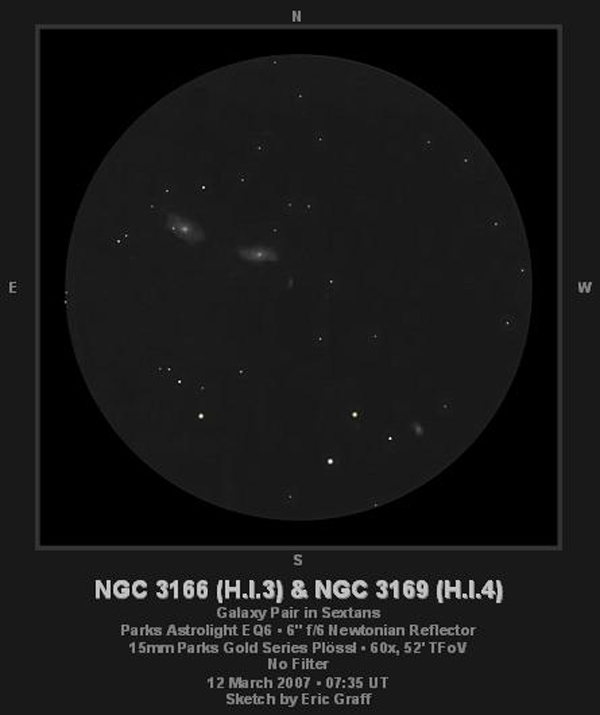 The interacting galaxy pair consisting of NGC 3166 and NGC 3169 is one of the unsung extragalactic showpieces of the spring sky.  They may be located in the north-central region of Sextans, 8.5° south of Regulus.  Separated by 6.3′, these two galaxies look like nearly identical twins in my 6-inch scope; they give the strong impression of a ghostly pair of eyes peering from beneath a star-studded hood.  NGC 3166 is slightly smaller and dimmer than its companion but it has a more conspicuous central region with a sharp stellar nucleus.  NGC 3169 also has a bright core but it is not as well concentrated as its neighbor’s.  A 12th magnitude star is superimposed on NGC 3169’s diffuse outer halo, just east of the central core.  With a magnification of 60x and placing NGC 3169 near the northeastern edge of the field of view I can just squeeze in the faint galaxy NGC 3156 just west of a trio of 7th, 8th, and 9th magnitude stars (it lies just 2′ from the faintest of the three stars).  This little galaxy is elongated northeast to southwest and has a slightly brighter center.  A much fainter galaxy, NGC 3165, glimmers intermittently with averted vision 5.4′ southwest of NGC 3166.

William Herschel discovered NGC 3166 and NGC 3169 on December 19, 1783 with his 18.7-inch reflector.  He designated them as the 3rd and 4th entries (respectively) in his catalog of “Bright Nebulae”.  Both of these galaxies are included in the popular “Herschel 400″ observing list.  Each of these galaxies shows evidence of tidal interaction and distortion on photographs.  NGC 3169 has a highly distorted spiral arm, while the dust lanes of NGC 3166 have been fragmented and twisted as if
the entire disk has been warped by the interaction with its neighbor.  It is estimated that these galaxies lie 52 million light-years away.