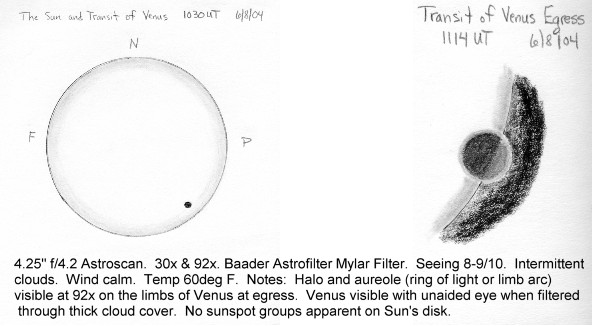 The transit of Venus June 4th, 2007
By Michael Rosolina

While listening to the McDonald Observatory’s StarDate, I was surprised to hear that
this week marks the 125th anniversary of the 1882 transit of Venus.  In my mind I
was transported back to June, 2004 eagerly anticipating the first Venus transit
since 1882.  No one living at that time had ever seen such an event.

The transit would be nearing its end when the Sun rose at my location so I set up my
small, portable Astroscan telescope equipped with a homemade white light filter on
the mountaintop behind my home.  I wanted my wife to see this rare event too, so I
lured her out by saying I needed her to watch my back for bears (not entirely
untrue–it was mating season and the black bears were very active).

As the Sun rose, we were completely enveloped in a cloud but soon the mist thinned
and we could see the small black dot against the solar disk with the unaided eye.
As conditions improved, we employed filters on the scope and on a pair of 10×50
binoculars to track the progress of Venus towards the Sun’s limb.

During egress, I was fortunate to detect the aureole created by the planet’s
atmosphere.  This halo was first seen during the 1761 transit by Russian scientist
Mikhail Lomonosov, who rightly concluded that Venus had an atmosphere.  The egress
created some interesting contrast effects which I have tried to render as I saw
them.

I later discovered that there was indeed a small sunspot group near the Sun’s
central meridian, but I could not see it because of the poor transparency.

The sketch was done in the field with 2B and HB graphite pencils on Strathmore
paper.  I used a 4 inch template for the Sun and a penny to make the template for
the inset.

Seeing the transit was a peak experience for me (my wife was glued to the binoculars
through the whole thing, too).  It was also very gratifying to see how the event
brought the global amateur astronomy community together as we shared sketches and
images via the Internet.

The next Transit of Venus will be June 6th, 2012.  Clear skies to all in 2012–there
won’t be another transit for over a hundred years.

2 thoughts on “Shadow of the Goddess”