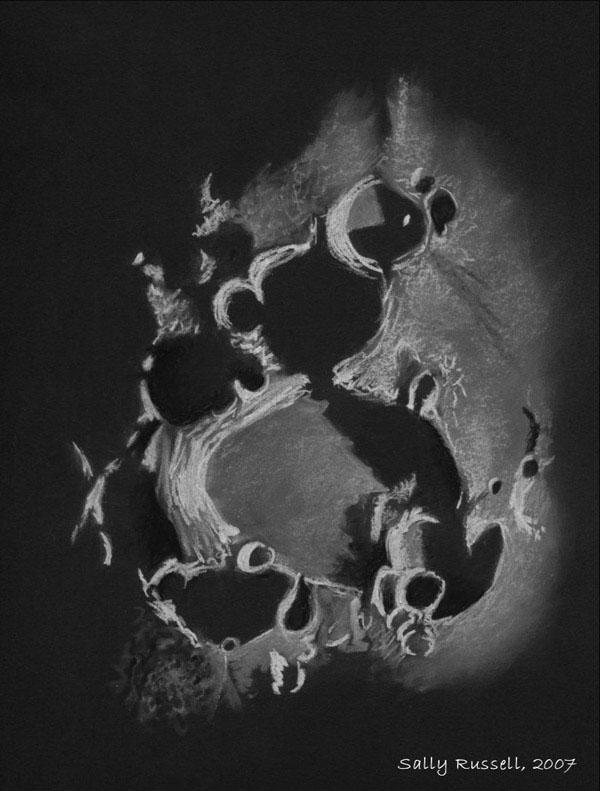 Distinctive crater Stofler resides in the midst of the dense and chaotic crater field of the southern hemisphere of the Moon. One clear but very chilly evening in January 2007, the challenge of trying to capture the view was more than I could resist – this is my attempt. The sketch was carried out using white and black Conte’ pencils and chalk pastels on black ‘Canford’ paper. I began by marking out the main crater shapes using white Conte’ pencil, then I used a small chunk of white chalk pastel, broadside, to lay down the mare regions, blending this with a fingertip and a small cloth. More highlights were added (white Conte’ pencil), and a putty eraser used to define some of the features (and shadow extent) by negative drawing where I removed areas of pastel previously laid down. More detail was added with white Conte’ pencil as I went along, but there really was far too much to capture and I realized that I would have to quit while I was ahead and finish my outside drawing time before the view changed substantially. Once back inside I tidied up the sketch, removing the inevitable unwanted pastel smudges with a putty eraser, and re-defining some of the darkened inner crater edges with black Conte’ pencil, then using blending stumps (with touches of both white and black chalk pastel) to make final tiny adjustments. The sketch has been inverted and rotated in paint shop pro to give the standard orientation.

The southern highlands of the Moon are almost completely dominated by craters in the 20 to 100 km size range, randomly scattered about the region. One way to determine relative ages of craters is to note which overlay or superpose over other craters or features, and the crater that obliterates or partially modifies another crater is usually younger. It is this principle that is the foundation of a stratigraphic approach to understanding lunar geological history. In the lunar highlands there is no shortage of overlapping or partially modified craters, and as Sally points out this region is about as densely chaotic as any on the Moon. A careful look at her beautiful sketch also reveals one of the great unsolved mysteries of the Moon. Many craters have smooth flat floors and the adjacent surface topography between these craters is also relatively smooth. The big question is: what is responsible for these smooth areas? Do the smooth floors and intercrater terrane reflect episodes of highland volcanism?  Or perhaps these areas are covered with thick layers of ejecta that settled out across the surface as a result of this large scale stochastical gardening.

One thought on “Pacific places amidst “magnificent desolation””