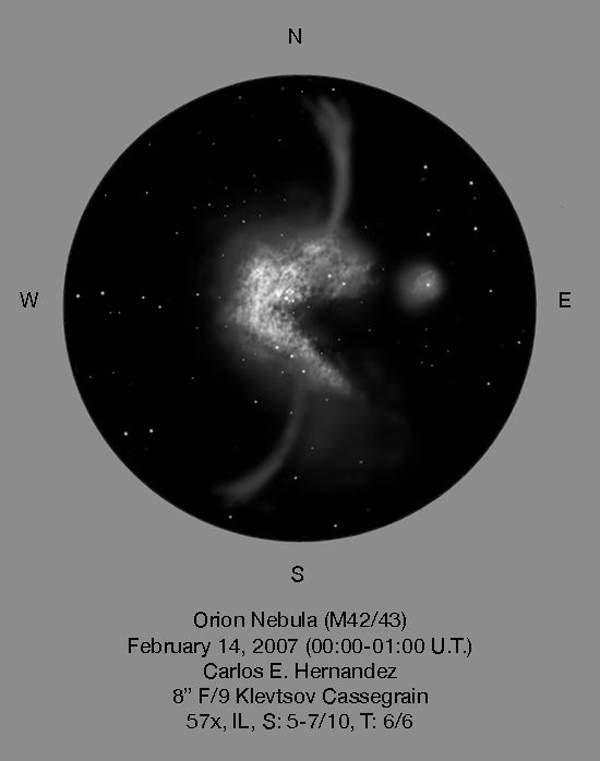 The Orion Nebula (M42, NGC 1976) is one of the most well known and observed nebulae in the heavens. This magnificent collection of gas and dust visible as the “middle star” of the sword of Orion measures 30 light years across and lies approximately 1,500 light-years away. The Orion Nebula represents a stellar nursery in which stars are formed from the accretion of hydrogen gas and dust into protoplanetary disks (or proplyds) as imaged by the Hubble Space Telescope (HST).

I made wide-field observation of the Orion Nebula on February 14, 2007 using an 8-inch (20 cm) F/9 Klevtsov-Cassegrain reflector (a catadioptric design employing a sub-aperture meniscus correcting lens combined with a Mangin mirror-lens secondary). The observation was made under very transparent (6/6) and steady (5-7/10) conditions. The core of the nebula appeared brilliant in the field containing the famous Trapezium. Fainter extensions were noted to project from the core, including elongated ones to the north and south. The rendering was initially made using graphite (6H to HB) on Bristol Board paper (smooth), scanned into Photoshop and reversed.

One thought on “Cradle of the stars”