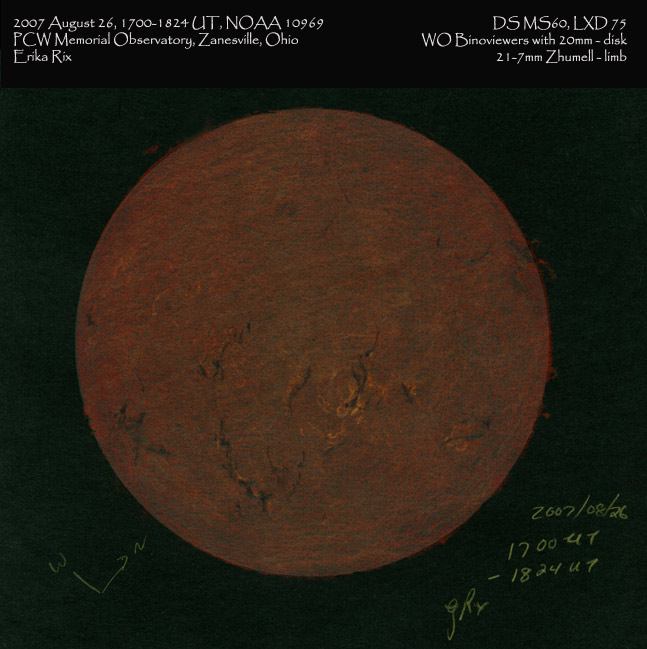 Clear progressing to mostly cloudy by the end of the session.

Sketching media: The white light sketch was done on copy paper with a number 2 pencil.

Word for the day:  Opacity

According to my heavy, red, weathered Merriam-Webster’s Collegiate Dictionary (tenth
edition), opacity is defined as:

I kind of got a kick out this.  It appears that with one word, I can attempt to
discuss opacity of the Sun and yet at the same time try not to create opacity while
doing it.

Studying the Sun, as well as anything worthwhile, can be very confusing and
sometimes overwhelming.  It helps to understand the basics such as knowing that the
Sun is a giant ball of gas.  It has several layers starting at the inner most called
the core. The majority of the Sun’s core consists of hydrogen.  By nuclear fusion,
the hydrogen is converted into helium.  The key here is that in doing so, energy is
created. Energy equals heat.  All in all, when we think of the Sun, we think of
radiation, or electromagnetic radiation to be more specific.  Radiation is a process
that transports energy.  Electromagnetic radiation is a radiation that carries
energy through empty space by means of waves at the speed of light.

You see, atomic particles (created by the nuclear reactions in the core) speed up
and grow from the exchange of varying flows of electrical and magnetic fields, which
is where electromagnetic radiation originates.  Following me so far?  Here’s where I
start to get back on topic.  Electromagnetic radiation has both wavelength and
frequency.  When you multiply the two together, you get the velocity of light.  If
one of the variables increases, the other has to decrease for the velocity of light
to stay constant.

Oh, how easily it would be to dive in further with all this.  But I need to stay on
track with the first definition of opacity.  Wavelengths are compiled in what we
call a spectrum.  And this is when we get into means possible for us to view the
Sun.

Imagine the energy being transported through a few more layers of the Sun, each
layer quite a bit hotter than the previous as it extends away from the core.  We
finally reach the layer that most call the “surface” of the Sun, the Photosphere.
Does that look Greek to you?  Well, not to worry.  It is Greek.  The Greek word
“phot” stands for light and “sphere” of course stands for round ball.

In the photosphere, the gas is heated so much that it burns bright giving off most
of its energy close to the middle of the spectrum, creating visible light.  And it
doesn’t end there.  Reaching out from that thin layer of burning gas is the
chromosphere, meaning round ball of color.  After a brief pass through the
transition region, the energy enters the corona and then outwards as solar wind.
Each layer is visible through specialized means.  Each layer involves our word for
the day, opacity.

One evening, quite a few years back, my brother in law and I were cooking supper
together. I was in charge of the chip pan and cutting up the potatoes.  I could see
him very clearly across the room and the air was transparent and had a zero optical
thickness.

As we were talking to each other from different ends of the kitchen, we soon noticed
that we were getting harder for the other to see. In other words, the optical
thickness was getting thicker.  By the time we became alarmed to this fact, the
smoke was nearly opaque with an optical thickness of close to 9.  I could hardly see
him anymore.  As he walked toward me, I could see him more clearly and by the time
he reached me the optical thickness was perhaps a 3.

We removed the smoking chip pan that caused the smoke from the stove, opened the
kitchen windows, grabbed the dog and a bottle of wine, and sat out on the steps of
the flat, watching the smoke roll out of the kitchen window.  I don’t recall what we
ever did for supper that night, but I suppose that’s beside the point. It was a
perfect example of opacity and how I measured it. The same is done when viewing the
Sun.

The further into the Sun we look, the higher the opacity. We can only see up to
approximately an optical thickness of between 0.5 and 2.  The photosphere is said to
have an optical thickness range of close to 3/4, and it includes all the light that
we can muster from the Sun, meaning white light.  If I wanted to view through a
narrowband filter such as a hydrogen alpha filter, the optimal optical thickness
would be reached before I even gazed into the Sun as far as the photosphere.  I
would in fact start at the Chromosphere.  This is wonderful news for us in that by
using special filters, it changes the opacity from a zero to us being able to
actually see the color of the light in this layer of gas, blocking out all the other
colors that would have hidden this color otherwise.

Well now, I’ve come full circle with opacity!  And what does this have to do with my
observations today?  Well everything to be honest.  Opacity is what strives us to
find new filters for trying to tease out as much detail as we can.  And there’s
information to be had if we can look at different layers of the sun.  In my
observations today, I viewed in both the photosphere and the chromosphere.  Two
different gas layers with a temperature difference of over 4000 degrees Kelvin
(chromosphere at 10,000 K and photosphere at 5780 K).  Each will allow us to see
slightly different details on the Sun and each are important to consider while
studying it.

This first observation was recorded in hydrogen alpha.  You can see the effects of
the magnetic fields through the long fingers of the filaments holding the cooled
dense gas in place.  Although this observation is mainly in the chromosphere and
lower parts of the corona, the filaments are generally held in place by regions of
opposing magnetic polarity within the photosphere.  Of course this is also the case
for the prominences, as prominences are filaments above the limb where the gas is
set in front of the black sky instead of the disk.  Although the filaments were very
impressive on the disk itself, they were not so impressive on the limb today.
Having said that, take a look at the faint section of prominence that appears to be
floating off the limb in the WNW region.

NOAA 10969’s plage intertwined and reached out with crooked fingers. 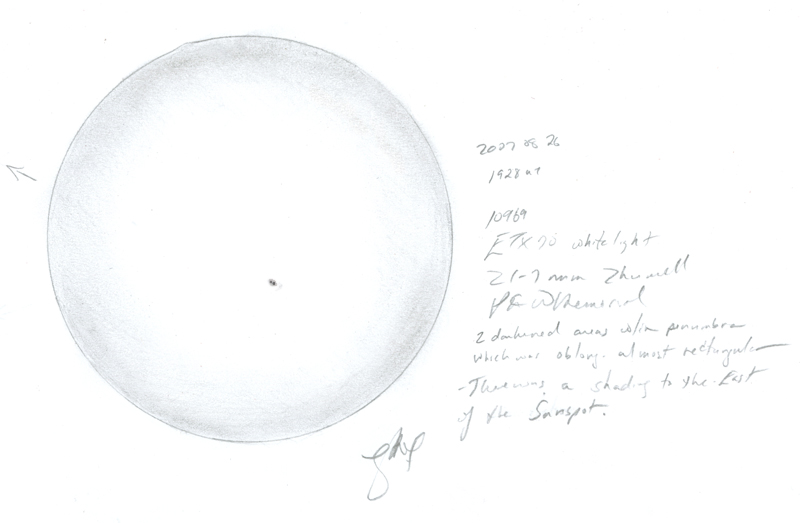 The next observation was using a white light filter where over 99.999% of the Sun’s
light is blocked out, making it possible for me to view the photosphere.  This is
called white light.  You can see NOAA 10969 in the cooler layer.  The chromosphere
becomes invisible to me again.  The two dark sections of umbrae within the penumbra
of this action region were very prominent.  I could see a darkened outline of the
penumbra and it had an almost rectangular shape with curved corners.  Of particular
interest was the very faint darkened area to the right of the sunspot.  This happens
to me fairly often, seeing little bonus features like this.  I’m still not sure what
causes it.  Normally I would think it was contrast from faculae that I was unable to
discern.  Normally we can only see faculae closer to the darker limb regions. But
often I can see an outline of contrast suggesting faculae present when the active
region is toward the center of the disk.

This time it is a little different.  If I didn’t know any better, it looked like a
thick triangular cooler region next to the sunspot.  By this I mean cooler than the
photosphere, hotter than the umbra, and only just slightly hotter than the
penumbrae.

With so much to learn concerning the sun, at least we learned one new word.  It’s a
start in the right direction anyway.

One thought on “A Capacity for Opacity”