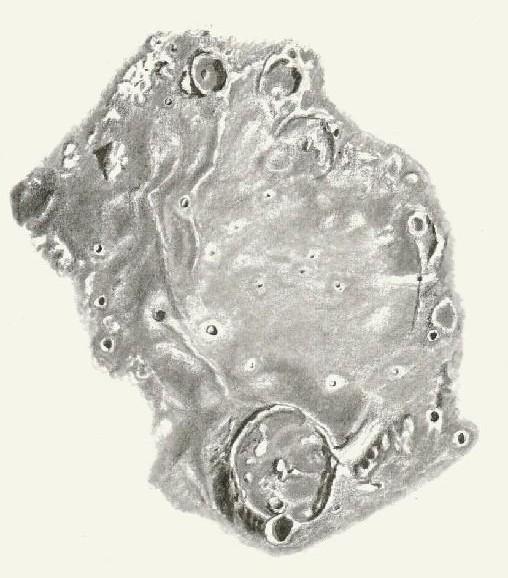 Mare Humorum, the “Sea of Moisture”
Sketch and Details by Frank McCabe

One month ago (August 15) I began a sketch I was unable to complete due to interfering clouds and lucky for me early on the morning of September 13 with the moon at approximately the same phase, I completed the graphite sketch of most of the mare Humorum basin (380 km.). This impact basin is a different shape and somewhat smaller in size than Marie Crisium (600 km.). Research mapping data puts the age of this sea at about 3.9 billion years, a Nectarian period formation. The floor is flooded over by a thick layer of basaltic lava especially over the central region. Additionally a number of large interesting craters ring the margins of this basin. At the southern edge (12 o’clock position in the sketch) you can see craters: Vitello, Lee and Doppelmayer. At the north edge (6 o’clock position) you can see crater Gassendi and on its rim Gassendi A. The lighting on both occasions was excellent for viewing the lava ridges on the eastern side of the maria. Both days were excellent for viewing a steady lunar image with a notable amount of fog on the second viewing morning.

Sketching:
Sketch was made over two observing sessions
For this sketch I used: white sketching paper 10”x 8”, HB, 4B, 6B graphite pencils, a blending stump and a plastic eraser and eraser shield. After scanning, Brightness was decreased (-2) and contrast increased (+2) using Microsoft Office Picture Manager.