On April first at 23:00 hs. in La Matanza, Buenos Aires, Argentina, I sketched Acrux, the brightest star in the constellation called “Southern Cross”, “Crux”, etc. This star is also known, in religious terms, as The Foot of the Cross, due to obvious location reasons.

It’s a nice double-star system done in white paper, with graphite 4B, 2B and HB2 pencils; after edited with Photoshop tool, while observing with a Newtonian SW 150/750 f5 telescope.

I liked the final results, so hope you like it too!

It’s a triple sketch, staring Minkar, Regulus and Mimosa (from left to right), all of them stars.

Seeing didn’t help at all, but anyway, it took me a while to finish the sketchs; the original idea was to draw at least six different stars from different constellations, but right after finishing Regulus, clouds came out to stop my work.

As a result, these are the three sketched stars. Hope you enjoy it!

Hi Asod! My sketch is about a triple and a double stars, in the same field. The triple is STRUVE 2816 and the double STRUVE 2819 and they are both part of the wide open cluster “Trumpler 37″ in Cepheus. I observed the two multiple systems with my Dobson 10” f/5 with a 14mm eyepiece, 82° for a 180x magnification. The observation is great!

Hi everyone,
In a slighly cloudy evening on 18th September, searching holes through the clouds, I have been able to observe one of most famous double star Albireo or beta Cygni. The seeing was very good and giving me a stationary image.
I have wanted o make a sketch of this spectacular object and its amazing colour contrast.
I hope you like it.
Bye.

It is very difficult to split Cs6 displayed in Photoshop (not pictured) double star.

Sorry for google translator 😉 , thanks……

Ahhh, this night I really enjoyed myself! Imagine a unlikely place of beauty, the St. Croix lake, with the emerald waters of the “gorges du Verdon” and just above a sky of dream.
Between the two: the Olivier Planchon Observatory located near the nice small village of Bauduen. In the observatory a heavy reflector holding a main mirror of 24″ (620mm) f/d 3.3, a series of brand new Ethos eyepieces and voila.
My pencils show the target of the moment: another comet PanSTARRS, still quite small, but just near the comet a very pretty double star.
My friend “Apilaure” a specialist of double stars, talks about this double:
– It is also called STF1758, a Struve of 1830. The separation was 3.4” in 2010. It is more than likely a physical double because Hipparcos gives the same parallax for A and B, so a distance of 279 light year. The couple turns slowly, 15° in almost 2 centuries.

This is undoubtedly the superb material and this nice double, that I was deprived of the sight of the ion tail, I will return in this observatory, that’s more than sure!

I wish all the best to the ASOD community !

I chose Vega in the constellation of Lyra as my first sketch study, as it was the brightest star in my visible night sky (… and 3rd brightest star in the Northern hemisphere night sky after Sirius and Arcturus). I threw the towel in on several sketches before arriving to this one. It sure is different to sketch in the dark! My first attempts had severely mis-plotted star fields, and even though a sketch of the night sky is never 100% perfect, it wasn’t even looking close to what I was seeing in my field of view! An hour and a half later, I was satisfied enough to call this one my first.

I was able to spot the famous “double double” stars of Epsilon Lyrae very easily, as well as a light blue tint to Vega, and some various stars with a light tint of orange. Even though winter is coming along, I could still see part of the “Summer Triangle” asterism with Altair and Deneb.

Object Name: The Moon and Beta Scorpius
Object Type: The Moon and a double star
Location: Haleakala Summit on Maui, HI
Date: August 14, 2013
Media: Pencil on a white sketch notebook page, reworked in GIMP and color inverted.
Because this event occurred over a short period of time, I was not able to make a detailed sketch of the moon. I’ve added details to one crater that lies near the double star which I’m guessing is Moretus. If anyone knows differently, please make a note of it in the comments.
The information about the equipment and the objects are included in the sketch submitted.
I give permission to display this sketch anywhere as long as I’m credited.
Thank you.

Epsilon Lyrae, the “double-double” star, seen in the 450mm Dobson of my friend Philippe.

During this 4th yearly animation made in the “Château de Berne”, a nice vineyard domain in Provence, I had the opportunity to sketch this difficult multiple star.

The northern star is called ε1 and the southern one is called ε2; they both lie around 160 light years from Earth and orbit each other. In this big 450mm eye, both stars of the binary can be further split into binaries; that is, the system contains two binary stars orbiting each other. The component stars of ε1 have magnitudes of 4.7 and 6.2 separated by 2.6″ and have an orbital period that can only be crudely estimated at 1200 years, which places them at roughly 140 AU apart. The component stars of ε2 have magnitudes 5.1 and 5.5 separated by 2.3″, orbit perhaps half that period. ε1 and ε2 themselves are not closer than 0.16 light years apart, and would take hundreds of thousands of years to complete an orbit.

I made the watercolor taking into account the further inversion needed, that means black for white and orange for blue, for example.

Clear sky to you all !
Michel Deconinck

I send you hereby my sketches of double stars mainly from Virgo, Aquila, Bootes and Lyra. I have observed these double (and multiple) systems on the 14th and on the 28th July. These are all different doubles (or multiples), with different separations from 1,5” to 200”, with different colours. But all can be observed with a small telescope like mine.

As I’ve already said, July 2011 was a productive month for me. I could observe and sketch many objects as I had never done before. Conditions were exceptional: no clouds, fair wind and pleasant temperature. That night I pointed my telescope to many objects. One of them was M20. Close to the Zenith, it was clearly seen. The dark paths in the Nebula were confusing, though. Only with averted vision I was able to notice the feature thoroughly, so it was a tough job to put it down on the paper. That was my best observation of The Trifid Nebula, I hope you like it.

Clear sky to everyone

One of the most beautiful double stars in the sky.
Clear skies,
Massimo

Wonderful star pair in the Camelopardalis; bright and intensive colors. I recommend to everyone in the northern hemisphere!
My blog: viktorcsehdraws.blogspot.com

Albireo is a beautiful, triple star system that consisting of Beta Cygni A – the orange, cool supergiant (in fact this is double star, but they’re too close to see it resolved. The second component is the Beta Cygni B – the Be star.

This is my first attempt at sketching a star field.

Object Name: Alpha Lyra – Epsilon 1 & 2 Lyra
Object Type: Double Star
Location: Locust Grove, VA
Date: 17 July 0130 UTC
Media: Graphite #2 Pencil on white paper. Photoshop inversion, enhancement.
Instrument: Oberwerk 15 x 70mm Binoculars
Weather: Clear/Partly Cloudy, 80 degF, Seeing 4/5, Transparency 4/5
Notes: Alpha Lyra drew my attention right at the end of twilight, and it was a beautiful sight with the Epsilon 1&2 double nearby. I could not quite discriminate (split) Zeta 1&2 to the lower right of Alpha, but I could tell it was elongated showing a hint that it was double. 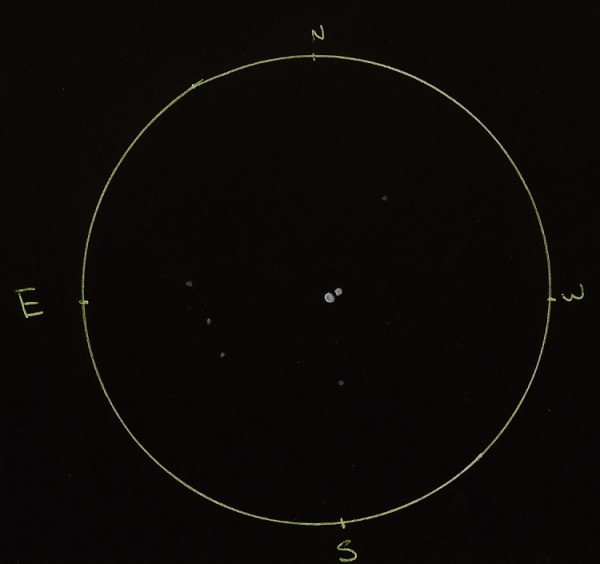 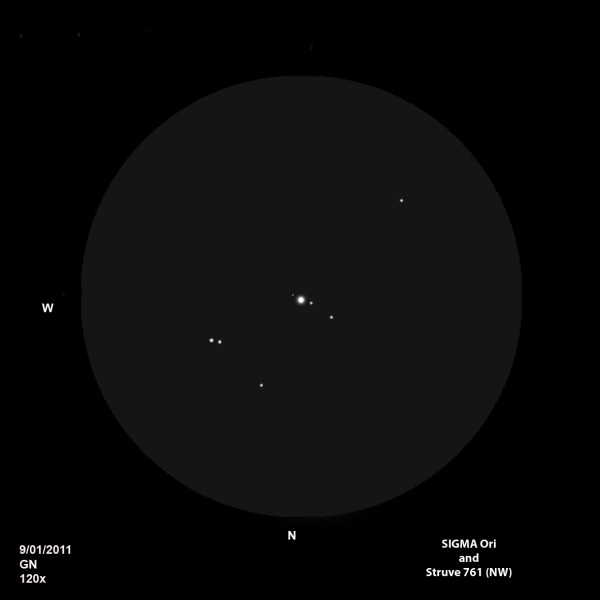 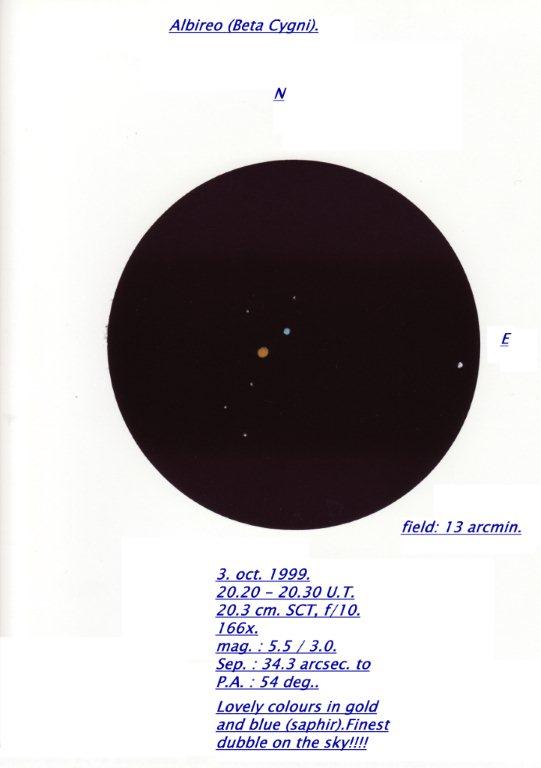 I send you a double “Albireo, the beautiful”.

This pair of stars, in the head of the Swan, I have observed many, many times with my telescope, but
every time I had been amazed of their very beautiful contrast in colours.
I have never seen them split with naked eyes, but with 10x 50 I have seen both.
I think Albireo is the finest double seen from Norway. More info on my sketch!

The observation was made outside Trondheim city, Norway.

Webmaster’s note: Per-Jonny, I’m terribly sorry this beautiful sketch got overlooked in the cue. I’ll be looking for your other sketch that was overlooked as well. Your sketches are always very well done. For anyone who may have sent sketches that were never posted, just email Rich Handy at webmaster@asod.info and Jeremy Perez at
asod@perezmedia.net. Let us know your sketch was overlooked and indicate the subject and date emailed and I’ll do my best to retrieve it. Again my sincere apologies. 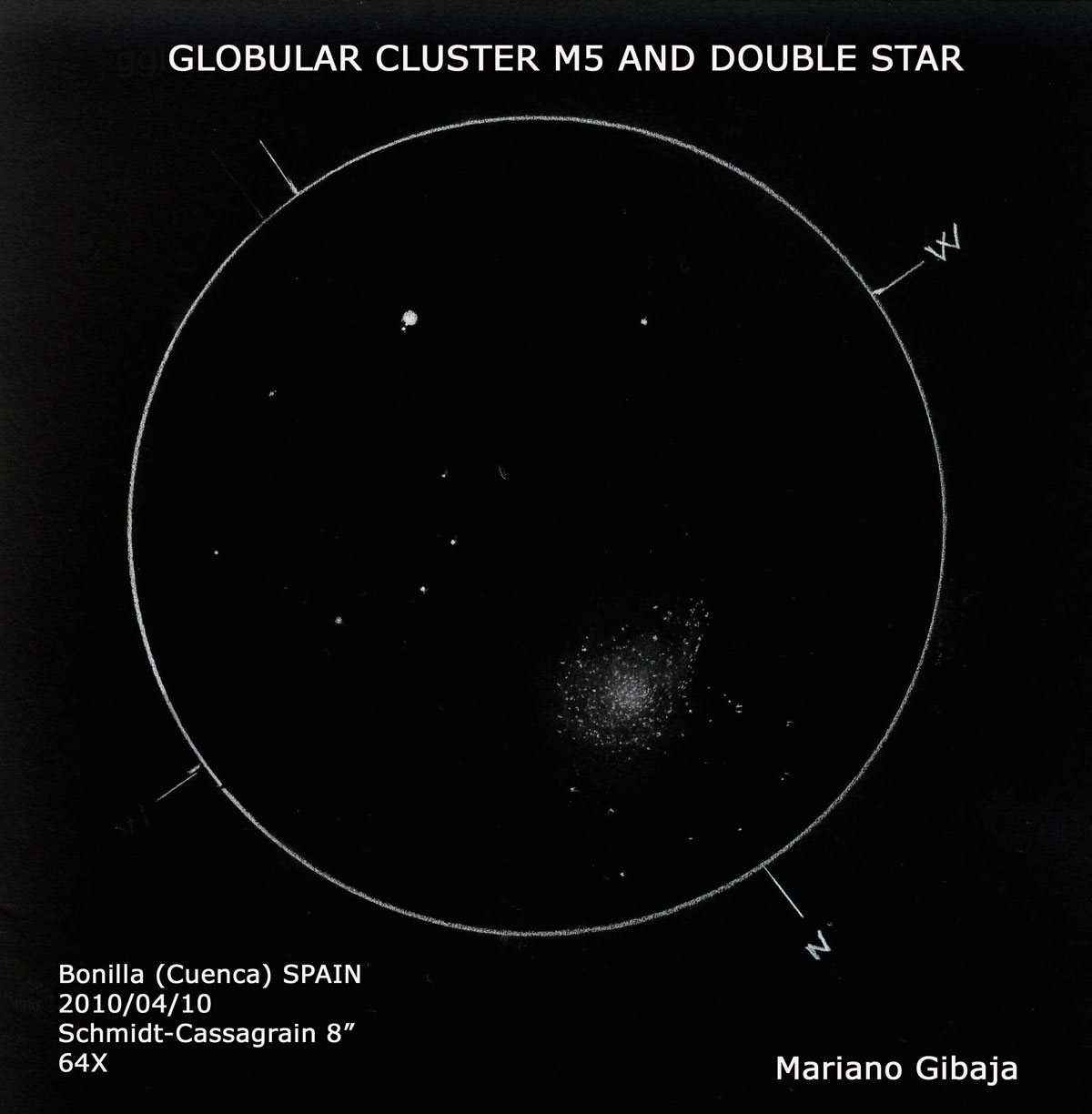 Messier 5 and STF 1930
Sketch and Details by Mariano Gibaja

The observation of this globular cluster is very rewarding. It finds itself
in Serpens’ constellation, approximately 25.000 light years away. M5 and M13
are the two most brilliant globular cluster in the northern hemisphere. It
has a very thick core and it can be observed how ramifications of starts
have their origin in it, the famous ‘spider legs’ that give to the cluster
its elliptical shape. The image of this beautiful cluster is completed with
the star 5 SER, with a magnitude of 5. But actually, if we observe closely
we can see that it is a double star. In this case it is the STF 1930, make
up of the star of magnitude 5 and its partner of magnitude 10, with a
separation of 11,4”.

I have done this draft in the observation area of the Astronomical
Association of Madrid (Agrupación Astronómica de Madrid) in Bonilla, Cuenca.
The weather was good and the temperature was around 3º C.

Do not miss the spectacle that this globular is offering and that will be
with us during the warm summer nights.