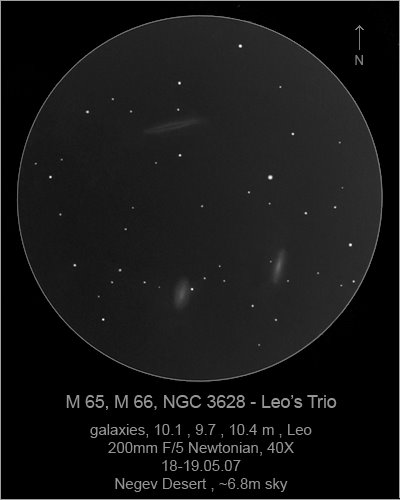 This striking deep sky trio lies some 35 million light years away and consists of three spiral galaxies. Their varied appearance is due to the different angles they present to our point of view.

NGC 3628, at the top of Michael’s sketch, is seen edge-on and displays a bisecting dust lane. Deep astrophotography shows that the outer edges of this dust lane are strongly distorted by gravitational interactions with its other two neighbors.

M65 (lower right) is a normal Sa type spiral galaxy with tightly wound arms, a prominent central lens, and dust lane. There are some knots visible near the dust lane which may be areas of star formation. Although it appears to be gravitationally bound to it’s neighbors in the Leo Triplet (M66 and NGC 3628), it does not appear to have been structurally disturbed by any interactions.

M66 (lower left) is a spiral galaxy whose shape has been distorted by interactions with its Leo Triplet companions, giving the appearance that the arms are raising above the plane of the galaxy. There are many emission and reflective nebulae evident, showing active star forming regions. The dust in the core of M66 is thought to be heated by older stars, as opposed to younger stars as is usually the case.

On a personal note: my sincere appreciation and thanks go to Jeremy Perez for his wonderful job of maintaining ASOD in my absence, as well as those contributors who have submitted their sketches and reports to this website while I was away.  You folks are great.

One thought on “A Trio of Leo’s Finest”