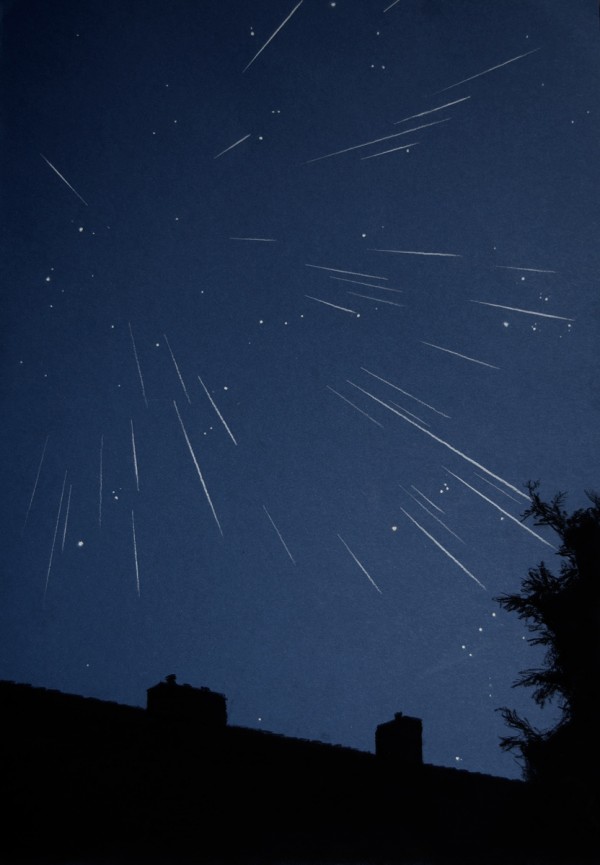 Last night the rich meteor shower of the Geminids peaked (actually it was around 14.00UT this afternoon, but the most favorable time to watch it from Europe was during the dark early hours of 14 december). Once again I decided to make a pastel sketch, just like I did during the Perseid shower last August. I used the same method: I made a very global sketch of the starfield I was going to view, including the obstruction caused by the roof and a tree on a dark blue piece of paper. In the field during the observation period I drew every meteor in place with a white pastel pencil.

But the shower was so rich I hardly got time to plot every meteor in the drawing. At given times there were 4 meteors per 10 seconds! I did not count them, but I must have seen over 150 meteors (incl. the ones outside the drawing’s field of view) in the 2 hours of observing time. Incredible! Around 40 of them appeared in the area of the drawing. I observed from my own backyard from 01.15 UT until 03.15 UT. Skies were clear during this whole period, but light pollution got a nasty boost from the snow that fell earlier that evening. NELM was around 5.

3 thoughts on “Fire from the Twins”