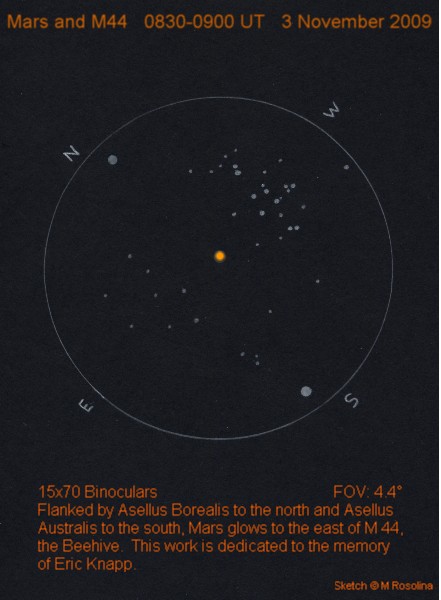 Mars and “The Beehive Cluster”
Sketch and Details by Michael Rosolina

The clouds parted over West Virginia the other night allowing me to view Mars shortly after it passed in front of Messier 44, the Beehive.

I made this widefield sketch in order to capture the star cluster and its two attendants, Asellus Borealis–the Northern Ass and Asellus Australis, the Southern Ass. In Galileo’s time (about 180 years before Charles Messier catalogued it), M44 was known as Praesepe, the manger, where the Aselli ate their hay.

Praesepe was one of the objects that Galileo scrutinized with his new telescopes, discovering that it was a star cluster and not a nebula or cloud as previously thought. One of his scopes had about 15x, although he didn’t enjoy nearly the field of view that I had with my modern binoculars.

I am dedicating this drawing to a friend who passed away not long ago. Eric realized his dreams of astronomy by becoming an operator of the 100 meter radio telescope at Green Bank, West Virginia.

4 thoughts on “Mars Glides Past the “Beehive””