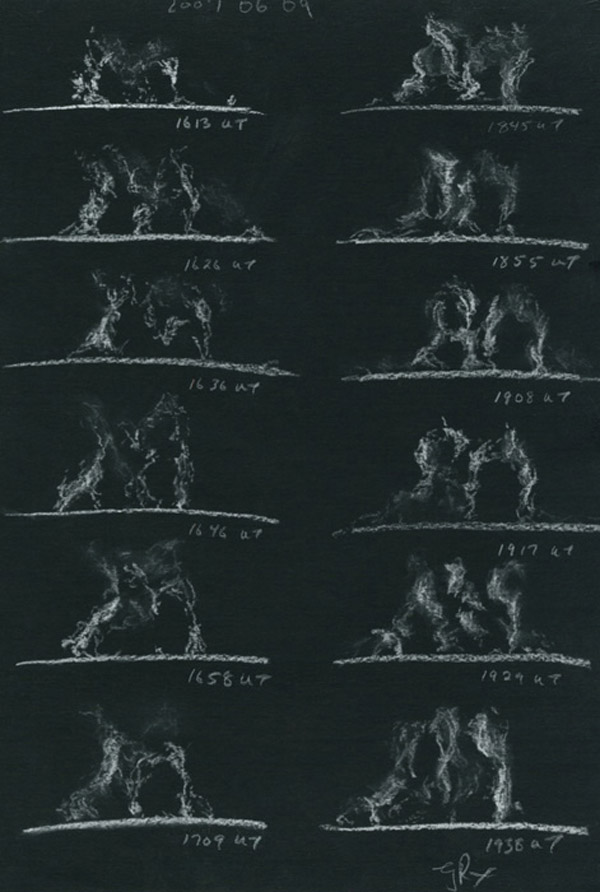 The flare activity this morning (June 9th, 2007) had pretty much subsided by the time my session took place.  Yes, I was disappointed, but AR0960 was still showy
with AR0959 accessorizing it nicely.  There was a thin little plage
marking 959 as well as plage just East of the center of the disk, and
plage also very thinly following the path of a long slender filament just
inside the Eastern limb.  Add the remarkable plage details in AR0960 to
that, and you have a straight line of interrupted plage going from East to
West.

The two spots within 960 were easy to spot as black dots.  There was a
third dot just North of them that I first thought was another spot to that
region. But I’m pretty sure it was a little piece of filament having
compared my sketches to other images afterward.

When tuning, I could easily pick out several other filaments across the
disk even though they were very slender and short, almost like little
crooked crosshairs of an eyepiece.  There were five definite prominences
with a few little hints of others on the limb.  The huge prominence that
was evident on the NW limb earlier this morning was no longer there that I
could see.  However, the “pick of my pleasure” prominence was the presence
of an “m” shaped faint one on the NE limb.  And this, my friends, became
the start of a three and a half hour project for me today.  It made no
matter that I had lots of chores to do.  Astronomy comes first…at least
today.

The series for this one prom was rendered in two sessions.  An hour with 1
minute intervals, an hour and a half break so that I could at least get
the riding mower part of the grass cutting done, and then another hour
session with 10 minute intervals again.  I would have loved to spend the
entire day doing this, but I was starting to get sunburn on my farmer’s
tan legs and feet that today sported sandals instead of sneakers.
Nevertheless, perhaps 12 sketches of the same prominence were enough to
show how dynamic the Sun is over such a short period of time.  Or could I
have really stopped because I didn’t want to be known as the eccentric
prom lady that latched on to only one prom, sketching it over and over
again with a strange fixation…you can chose, if you like.

Sketches were done with black Strathmore paper and colored Conte’ crayons
for the full disk, white Conte’ for the prominence sequence.

This is a delightful video version of full disk and the prom sequence sketches that Erika created: http://www.photoshow.com/watch/gA4ky6wN   check it out!

2 thoughts on “One prom times twelve”