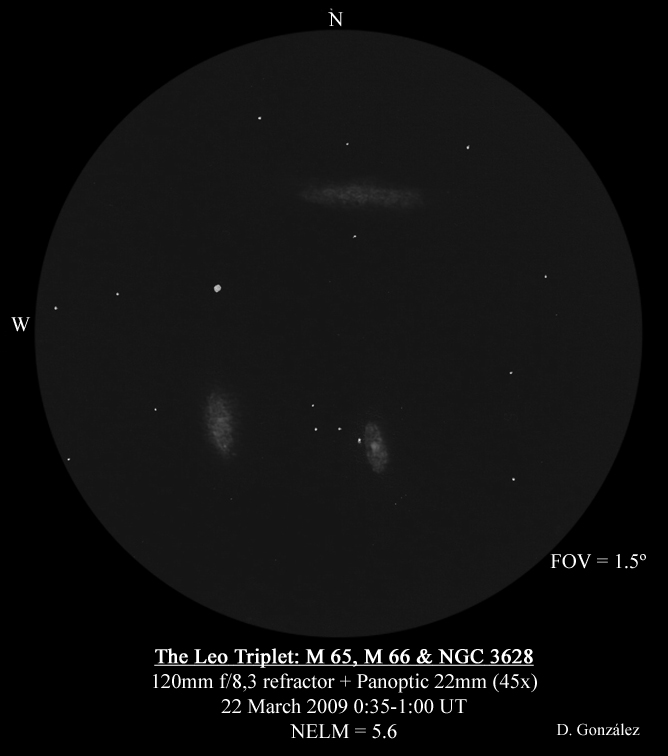 This is my first submission to ASOD although I am a long time reader of the website. Here is an sketch and small report of the Leo triplet I made last spring from my home in cloudy northern Spain.

The Leo Triplet is easy to find south of bright star Theta Leonis. M 65 and M 66 are seen without much difficulty south of a 7th magnitude star, but under my sky conditions NGC 3628 requires more attention.

M 66, the easternmost of the Messier galaxies, lies next to a group of four stars ranging from 10th to 11th magnitude. The galaxy has a bright nucleus and an elongated halo running NNW-SSE, small and well visible, that is gradually lost in the dark sky. The other Messier galaxy, M 65, has an orientation and size very similar to its companion, but its look in the eyepiece is different. I canâ€™t see a prominent nucleus and the brightness seems rather uniform but increasing slightly towards the center.

NGC 3628 is a bit more difficult than its companions, and I need 45x to make it visible, although the best view comes at 77x (Hyperion 13mm eyepiece). The galaxy is a faint spindle, very elongated in E-W direction. It is noticeably bigger than the Messier galaxies and creates a beautiful contrast with them.

Using my Panoptic 22mm eyepiece, I can see all three galaxies in the same field of view, making it a wonderful view. The three galaxies are Hubble type Sb, but each one has its own features that make it different from the others at the eyepiece. The average distance to the Leo Triplet is about 30 million light-years.

4 thoughts on “Three for the Lion”