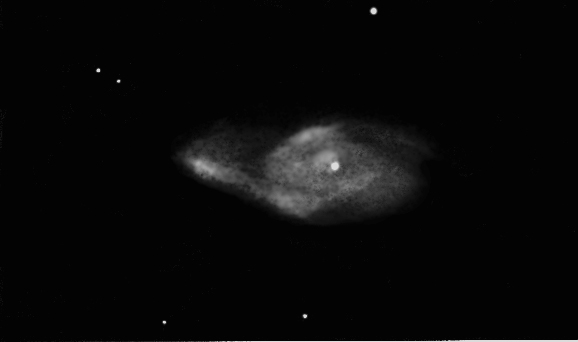 NGC 4088 with supernova 2009dd
Sketch and Details by Howard Banich

After an enjoyable night of observing faint and somewhat difficult to find galaxy clusters I settled on NGC 4088 with its new supernova as my final object. Well, it seems I saved the best for last! 4088, also known as Arp 18, is a terrific spiral galaxy with obvious asymmetry to its spiral arms and a bright supernova near its core. This was a visual treat as well as an opportunity to ponder the reality of a star blowing itself to to bits.

The sky had variable high clouds all night but at the time of this observation was at its clearest. Three nights later under a clearer and darker sky, with an SQM reading of 21.51, the view was much the same but the supernova had noticeably faded. Even so, NGC 4088 has become a new favorite and I’m grateful that SN 2009dd brought it to my attention. Perhaps the most startling fact of these observations near the April new moon were the run of clear nights that made them possible – a rarity indeed in the Pacific Northwest.

Starting with a scan of my eyepiece pencil sketch, I used the blurring and smudging tools in Adobe Photoshop Elements to smooth the rough areas into a more natural look. I made the stars round by using the eraser and pencil tools, and then touched up each star with a couple of clicks of blurring. I finished the image by inverting and adjusting the brightness and contrast levels.

2 thoughts on “A Spiral Galaxy Hosts a New Supernova”