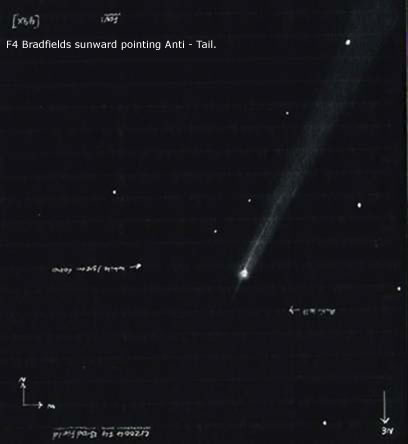 C/2004 F4 Bradfield on April 29th 2004 at 03.47 LT as seen through the 8″ F/6.3 S.Cass among the star fields of Pisces low in the NE very close to the sun. This was a beautiful comet – I could see it rise tail first over my garden trees through my 10X50 binoculars and finder scope. The white straight dust tail was 5 degrees long with a compact well condensed white/green coma and spine. However this morning was a time of surprise and discovery – as soon as I swept up the comet I was shocked to see a bright anti-tail pointing toward the sun which was not their before. This was my first observation of an anti-tail and I was among only a few lucky observers to have seen it.

Before it appeared in the morning sky the comet made for a spectacular sight in the SOHO LASCO C3 images where Bradfield could be seen completing a hairpin turn around the sun with an incredible bright curved tail. The comet looked like it was a living creature! This was the 18th comet discovered by the living legend known as William (Bill) Bradfield who found the comet close to the sun during an evenings comet search.

One thought on “Chasing an Anti-Tail”