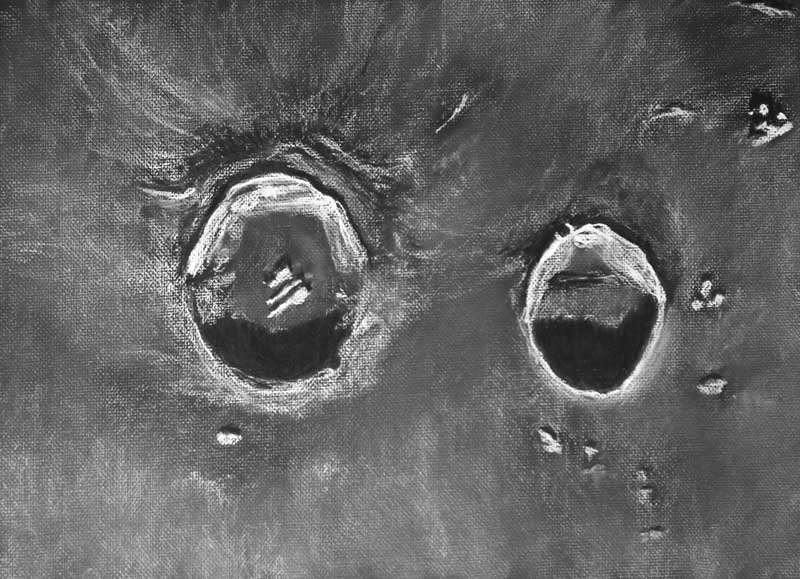 Aristillus and Autolycus
Sketch and Details by Richard Handy

Sitting replendently on the the eastern margin of Mare Imbrium, 56 km Aristillus and 41 km Autolycus, brothers of Copernician age, are a startling sight in the late lunar afternoon sunshine. Hexagonal in appearance, Aristillus’s broad and radially splayed glacis dominates the mare surface in this region. It’s wide, brilliantly lit terraces apparently have evidenced some mass wasting since its creation a little over a billion years ago. Resting on the floor, some 3650 m deep, the glowing central peaks are roughly 900 meters high. Rays, some quite prominent, emanate from the crater’s center. To the northwest of Aristillus, swathes of darker mare may indicate areas not fully dusted by the ejecta from this massive impact, or perhaps ejecta excavated from deep within the extant mare is responsible for these low albedo areas. Approximately 60 km to the south, Autolycus’s glacial nimbus appears almost serene in comparison to the complex nature of Aristillus’s glacis. Half of the floor of Autolycus is composed of quite torturous terrane including a strange floor subsidence to the eastern section of the floor.

2 thoughts on “Raising Eyebrows on the Floor of Imbrium”