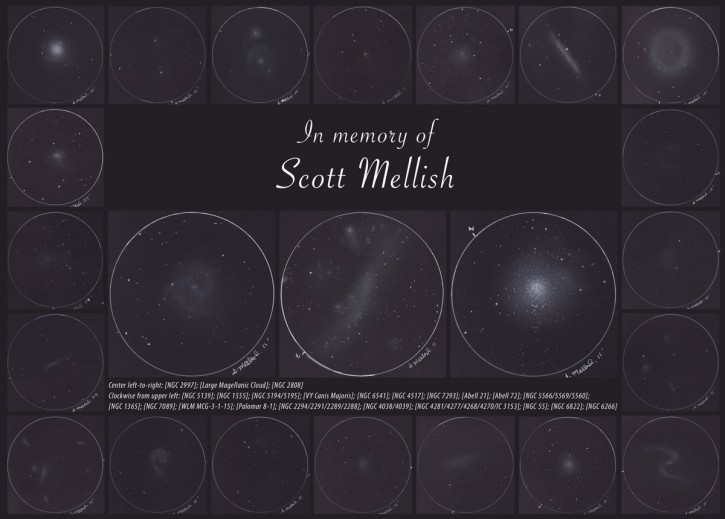 We are saddened to inform you that skilled observer and astronomical sketcher, Scott Mellish, passed away last week. He was 46 years old. His contributions to amateur astronomy and to the Astronomy Sketch of the Day will be greatly missed. Today’s image features a collage of some of Scott’s incredible sketches. To view more of the work we have been privileged to feature here, please browse the gallery at this link: Scott Mellish Sketch Gallery.
We wish to extend our condolences to all of his family and friends.

Richard Handy and Jeremy Perez
Astronomy Sketch of the Day

The following message was posted to members of the ASNSW by Paul Hatchman.
——–
Dear Members,

It is with great sadness that I have to let you know that Scott Mellish passed away late last week.

Scott had been an active member for over 25 years and was awarded life membership in 2008 for his invaluable contributions to the society. He was well known for his beautiful sketches of deep sky objects, many of them done at Wiruna, which he attended regularly and deeply loved. A sample of his sketches can be found on Astronomy Sketch of the Day at the following link http://www.asod.info/?s=scott+mellish&x=0&y=0

Scott’s knowledge of the night sky was remarkable and he would often observe some of the most obscure objects from Abell planetary nebulae to the Fourcade-Figueroa object. For this he was awarded the Mike Kerr Award for Observational Astronomy in 2010. He served on the committee as observations officer and was a regular contributor to “Universe” with observation reports, movie reviews, articles on string theory and many other topics, receiving the Editor’s Award on many occasions.

Scott had a great many friends in the Society who will all miss him deeply and the Society will be that much poorer without him.

The funeral arrangements are not know at this time, but I will let you know once they are available.

13 thoughts on “In Memory of Scott Mellish”