The beginning nights of this year l could study intensely the physics of the Jupiter and moons such as motions, speeds, approachings, etc.

Great seeing were on the nights January. 3, 5, 18th, l made 2 main body of Jupiter sketches, 100 of the moons’ movements brief sketches with my 13″ refractor during just only 3 nights and these were seems to surpass the total amount of knowledges about Jupiter system saved in past 20 years with my 5-8″ instruments.

Am 2- 5 ;00 , the seeing was maintained 9-10 /10 for 3 hours on 18th Jan. l could see even the internal simplest details on Ganymede that heart beating with it’s limb between expanding and contracting with a 2 -3 seconds cycle . You can see its one of the mouments here as a water color painting , the feature on the moon was not settled as one but changed as ” T,Y,<,V,X,*..." shapes in the eyepieces because of the hard 1.7 arcseconds dia observing object also because by the 4.5 Ju-Dia distant Jupiter's glare. l observed Ganymede for 1 hour , the features were seen 20 times with one time as long as 5 seconds in 3 minuts interval for 1 hour. The large grayish white "NPC of Mars like" looking feature was impressive. Notice the Io, Europa's circular disks transformed as strong ellipsoid at 3;20 , weak at 4;02 on 3rd Jan. when they approaching together in the center of the field of the eyepieces. lt was very much impressive. l prepared that night's moons contact time-site markings in their syncronous motions in my bird-eye view scale plans describes the objects' exact time-positions to seek light speed for following 2-3 months as the Roemer did 350 years ago. "Seek himself (or herself ) the light speed"... lt is a must for a ama-astronomer. K.S. Min 2015. 1.3 - 1. 18 320mm refractor x400-600 Graphite pencils, water color, acrylic, crayons , white paper South Korea 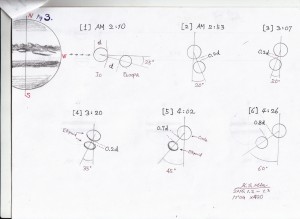 One thought on “Heart beating Ganymede”