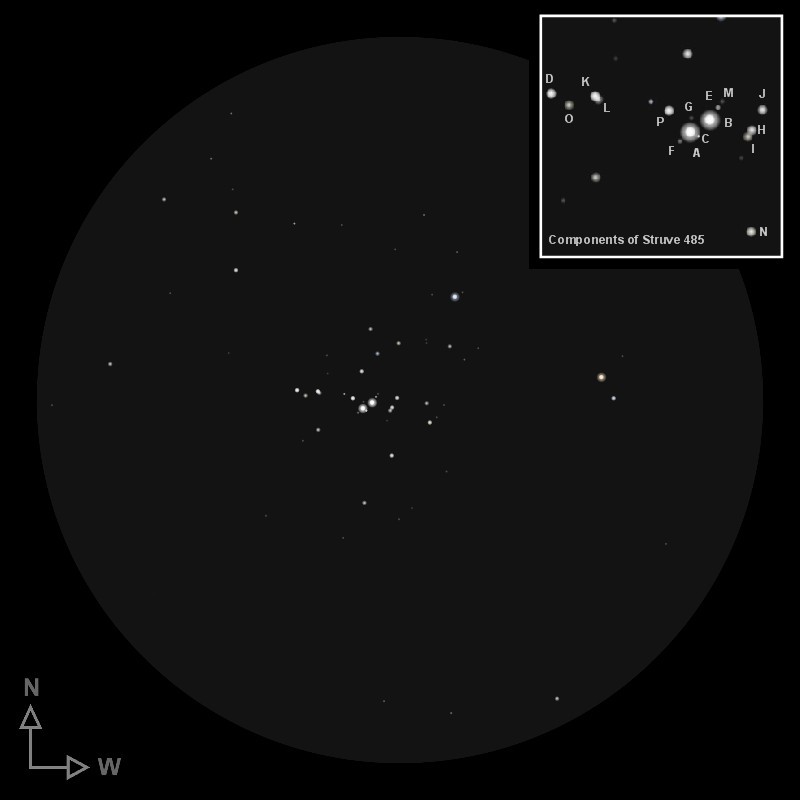 Dangling off the southern end of Kemble’s Cascade, one the sky’s better-known asterisms, you will find the open cluster catalogued as NGC 1502. Easily visible, even at low magnifications, as an unmistakable glittering mass of stars, the cluster is dominated by a brilliant pair of 7th-magnitude snow-white suns separated by 18″ of arc in position angle 305°. These two are the principal members of the multiple star STF 485 (ADS 2984; CCDM 04078+6220).

Increasing the magnification brings better definition and resolution to NGC 1502. A 7.5mm G.S-5 Plössl yielding 120x provided the most pleasing view in my scope, and this was used in the sketch presented here. All of the cluster stars appear to be pure white (or nearly so). The brightest stars in the cluster are concentrated into a narrow east-west band of stars spanning the cluster’s 8′ diameter. Most of these are members of the STF 485 system.

The Catalogue of Components of Double and Multiple Stars (CCDM) lists 16 members for STF 485 with magnitudes ranging from 7 to 14; these are designated (A-P) as indicated on the inset. Components C, E, F, G and M are very challenging due to faintness (mags 11.9-14.1) and proximity to A and B; the remaining members are quite easy by comparison. Component B is also a variable star, designated SZ Camelopardalis. It is a Beta Lyrae-type eclipsing variable with a period of just under 2.7 days and a magnitude range from 7.00 to 7.29. While component A might seem like a convenient comparison star for making magnitude estimates of SZ, it is suspected of being variable as well, with an observed amplitude of about 0.1 magnitude. Components H, I and J are also catalogued separately as STF 484 (ADS 2982); components K and L are catalogued separately as Holmes 3 (ADS 2989).

William Herschel discovered NGC 1502 on November 3, 1787 with his 18.7-inch reflector. It is sometimes called the Golden Harp Cluster; it contains 63 member stars and lies 2,650 light years away in the direction of Camelopardalis. Its age is estimated at 5 million years.

2 thoughts on “A Swarm within a Swarm”