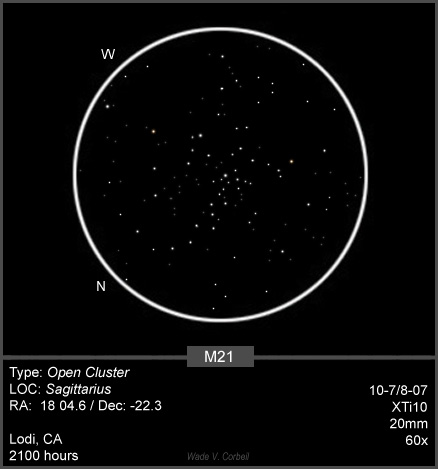 This is an Open Cluster found in Sagittarius that contains a lot of stars of varying magnitudes, and lies close to M20 (Trifid Nebula). According to my notes, this OC was completed over the course of two evenings due in part to its location in the sky. It slipped behind some trees to my south on the first night, so I had to finish the sketch the following evening. Total sketching time at the EP was, I believe, approximately 1.5 hours.

A nice OC that fills up the entire FOV in a low-power EP. 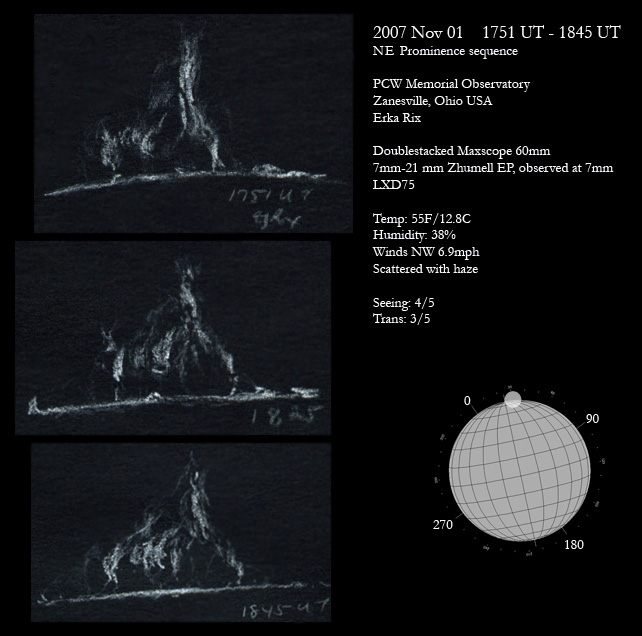 This is a sequence of the large prominence on the NW limb. I was so mesmerized by it that I wish I could have spent the entire day observing it. If you look closely, you can see a prancing Arabian horse in the prominence.

I used black Strathmore Artagain paper with a combination of white Conte’ pencil for the brighter, more dramatic areas and white Prang pencil for the fainter, whispy areas. I softened the black background in Photoshop to try and erase the splotchiness of the black paper as it took away from the faintest sections of the prominences. 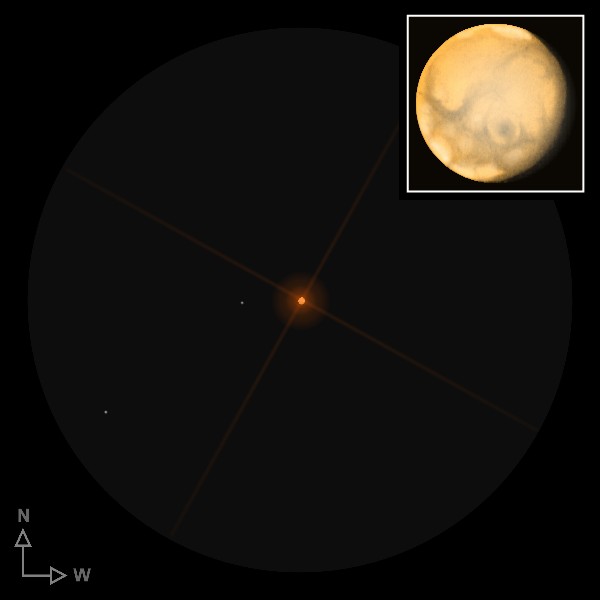 The December 2007 opposition of Mars will pale in comparison to the very favorable oppositions of 2003 and 2005, achieving a maximum angular diameter of 15.9″ on 18 December 2007. On the other hand, it will not appear this large again until the opposition of 2016; also, unlike the previous two favorable oppositions, the Red Planet rides high over the northern crest of the ecliptic, placing it nearly overhead as it crosses the meridian for northern hemisphere observers.

On 30 September 2007, the Martian disk measures a mere 9.6″ and still shows a strong gibbous phase (the disk is 87% illuminated). The central meridian (CM) at the time of observation was approximately 110°. The principal Martian surface features identified during this observation include the dusky circular feature Solis Lacus drifting toward the terminator and the dark band of Mare Sirenum emerging from the limb. The Tharsis plateau, home of Mars’ mighty shield volcanoes occupies the relatively featureless golden plain near the center of the disk. Bright patches were detectable in the vicinity of both the north and south poles; I’m not sure whether these are the actual polar ice caps or “polar hoods” which are atmospheric mists associated with the evaporation of the caps. A few other patches of haze were detected around the southern limb. 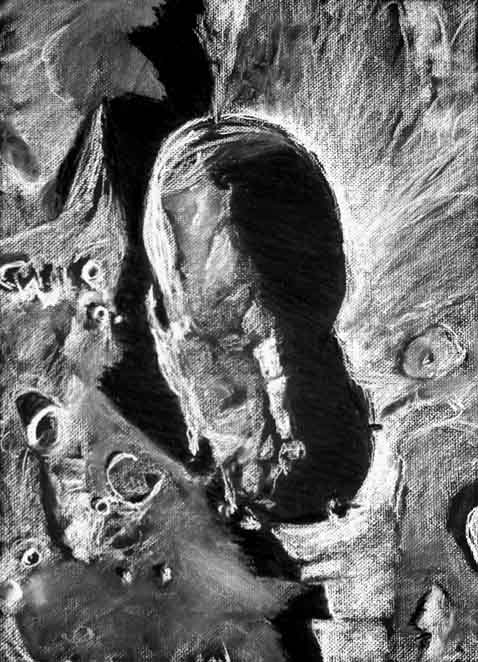 On October 30, site administrator, Rich Handy, lost his home to a fire. He and his family are ok, but as you can imagine he has a lot to deal with right now. Please keep him in your thoughts during this very difficult time. Until Rich feels ready to return to administering the site, I’ll do my best to keep things going. I’ve updated the submission page to include an email address to which I have access.

Rich has been very conscientious about not posting any of his own sketches here. I think this is an appropriate opportunity to dedicate the November 1, 2007 Astronomy Sketch of the Day to one of his many excellent Lunar sketches.

Hang in there Rich, we’re all pulling for you,

Here are Rich’s notes about the beautiful surroundings of Hainzel, Hainzel A and Hainzel C:

In the south western quadrant of the Moon, amidst the heavily bombarded highland terra and adjacent to Lacus Timoris (the poetically named “Lake of Time”), lies the trio of complex overlapping craters, Hainzel, Hainzel A and C. A quick look at this grouping in this lighting may leave one with the mistaken impression that these three are the result of a single asteriod that broke into a couple of major chunks just prior to impact, resulting in the elongate structure without an obvious wall separating the two larger impacts. Despite that appearance, however, each crater was formed at a different epoch.

78 km Hainzel which comprises a good portion of the southern portion of the “fiddle” shaped complex, is a Nectarian era feature, formed sometime between 3,920 and 3,850 million years ago. In my sketch you can see that indeed, the lower crater has taken several impacts to it’s rim. In contrast, 38 km Haizel A above it, is a relatively youthful Erastosthenian era crater formed between 3,200 and 1,100 million years ago. Here again its youth can be gaged by the very fresh looking glacis, shown in my sketch as the ropey and branching area to the upper right of Hainzel A’s rim (the upper body of the fiddle). The drawing shows few superposed craters over this large area, a definite indicator of freshness. 19 km by 28 km Hainzel C is an Imbrium era crater formed during the gap in time between Hainzel and Hainzel A’s appearance between about 3,800 million and 3,200 million years ago. The light was not favorable for a good look at C, covered as much as it it was by deep shadow from it’s bigger brothers. Hainzel C is superposed on Hainzel. Previous views of C showed a damaged and disrupted floor and walls, most probably the result of the impact of A.