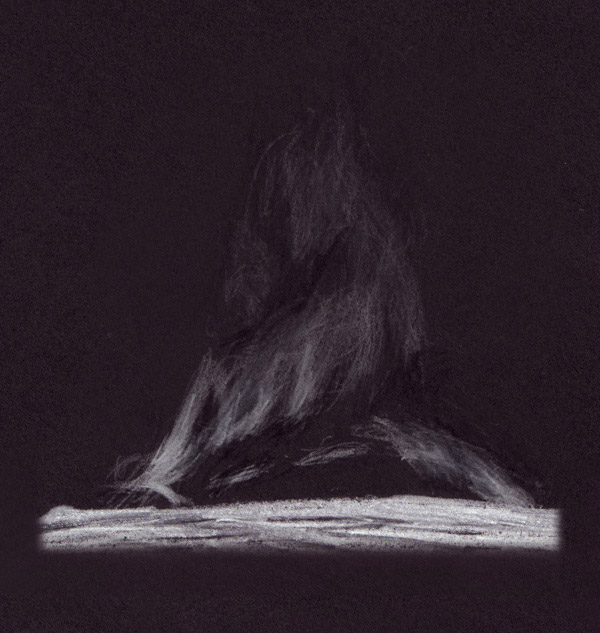 This large prominence was on the sun’s south west limb on March 27, ’07. Activity was otherwise low.   Paradoxically, prominences are cooler than the surrounding atmosphere. They are columns of sun-stuff trapped and held up in the magnetic fields above the solar surface.  The trapped plasma cools, recombines into hydrogen atoms and then emits visible light to show up as a prominence.  The glowing gas twists and swirls in the sway of the magnetic fields and can change its appearance from minute to minute.

Observed from England at 10.30UT through a SolarMax60 H-alpha ‘scope at 50-80X, seeing moderately steady.   The sketch was made large on A4 Canford black cartridge paper using white Derwent Studio and Derwent Watercolour pencils, the latter dry.   I try to avoid erasers or blending stumps as they can sometimes take away the immediacy.   If necessary, unwanted marks or brightness are reduced with lines of black Derwent Studio pencil.   It is necessary to work fast and to finish a sketch within ten minutes, any longer and the scene can alter significantly.   Details of this prominence were changing quickly but it was visible in more or less in the same overall form for over two days.

Stop by and take a look around Les’s spendid daily website “Atmospheric Optics”. Click on the link in the blogroll.

One thought on “Cold clouds”