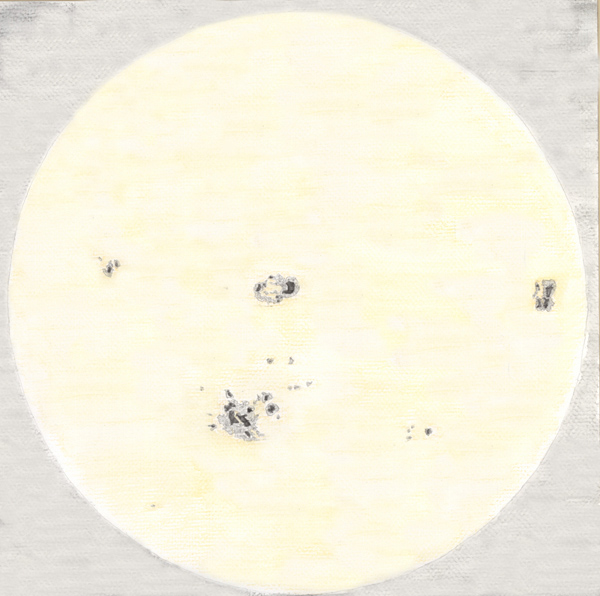 The sunspot number on October 28, 2003 was 238. An X-17 solar flare erupted that morning. Sunspot groups 484,486, and 488 were associated with Coronal Mass Ejections and auraural activity. The attached watercolor was based upon a white-light solar image captured with a 4″ refracting telescope, a white-light-solar filter, and a digital camera. The image of the sun with sunspots 484, 486, and 488 was processed in Photoshop and then printed. In a photocoping machine a transparancy was made. The transparancy was placed on an overhead projector and the projected image was traced and colored with watercolor pencils. Then, with a brush, water was added to the sunspots and to the remaining surface and background.

If the use of an “overhead projector” sounds like something from a school project, it was. Students at the A.R. Gould School in South Portland, Maine have used this process numerous times to document their observations.

… just a thought about tracing. In the late ’90s, I sent a cardboard-box camera obscura to Betty Edwards, the author of “Drawing on the Right Side of the Brain”. In her book she recommends that one should try to copy an image that is upside down; she suggests that that may allow the observer/drawer to see what is there and not what one expects to be there. In the camera obscura that I constructed, the image was projected upside down. In our conversations I asked her about the whether she thought tracing was drawing. She said that if two people were to trace the same thing that the finished drawings would be different, because drawing is about how we see things. (She also said that tracing allowed muscles to build muscle memory. I suppose that that is similar to practicing scales in music.)