Across the Carpathian Mountains resting on the eastern Ocean of Storms is the
landmark crater of the Sea of Islands, mighty Copernicus. Copernicus is a 95
kilometer diameter complex crater that begins to show itself in all its majesty
two days past first quarter. During the time of “Snow-Ball Earth” 800 million
years ago the event that created Copernicus suddenly occurred. What remains is a
3.8 kilometer deep hummock covered flat floored, centrally peaked, terrace walled
spectacular sentinel. Especially during high sun the bright ray system of this
crater can be seen extending from the base of the glassy glacis in all directions.
The descent from the rampart to the mare floor below is about one kilometer. Three
of five peaks were clearly visible in morning sunlight. In 1999 the Clementine
near infrared camera detected magnesium iron silicates in the peaks indicating
rebound of this deep rock through the surface crust following the impact event.
To view this impressive crater all you need is a good pair of binoculars and an
opportunity between two days past first quarter and one day past last quarter.
Weather permitting, you can see it tonight.

For this sketch I used: black Strathmore 400 Artagain paper, 9”x 12”, white and
black Conte’pastel pencils and a blending stump.

I’ve been doing a study on lunar phases and this is my latest sketch. This is a photo of it from last night after wrapping up my observing session. No adjustments have been made to the sketch other than cropping the lower blank portion of the paper.

My phase sketches used to take close to two hours to complete at the eyepiece. I’ve been building up my endurance to 3-4 hours for a single sketch to include more detail. Obviously, the terminator is drawn first to “freeze” the time stamp on the phase. Then I work my way across the disk at a more leisurely pace, moving my observing chair and stool gradually as the session progresses.

Total eyepiece/sketch time is just over four hours on this one.

As a little summer holiday project I made a pledge to myself to sketch lunar craters at every opportunity, casually assuming that the usual poor British summer weather would make this an easy commitment to keep. However, I have been kept busy over the last couple of weeks!

I have been inspired by the quality of the sketches on your website and as you can see I am still some way off those standards; however, I am pleased to see (I think) some improvement in my efforts. I sketched this at the eyepiece using the pastels and just my finger as a blending tool.

Finally the clouds have gone so I tried to get a nice view of the moon. It was also a photo session so after finishing the previous sketch I took a picture that it was useful to catch many details from the moon. This is my first drawing objetct and it was a pleasure to work with this amazing object day after day.

The L.C. Bates Museum in Hinckley, Maine received a NASA SOI (Summer of Inquiry) Grant this summer, and astronomy camp was held this past week. Twelve campers, age eight to twelve, observed the sun’s photosphere (whitelight) and chromosphere (h-alpha), put together a Gallileoscope, flew a 5′ tall Montgolfier-inspired hot-air balloon, constructed Alexander-Graham-Bell-type tetrahedron-cell kites (flying machines), learned how to measure a celestial object’s altitude and azimuth, and made the attached drawing after a daytime observation of our moon. The sketch was made from a projected image of our daylight observation. 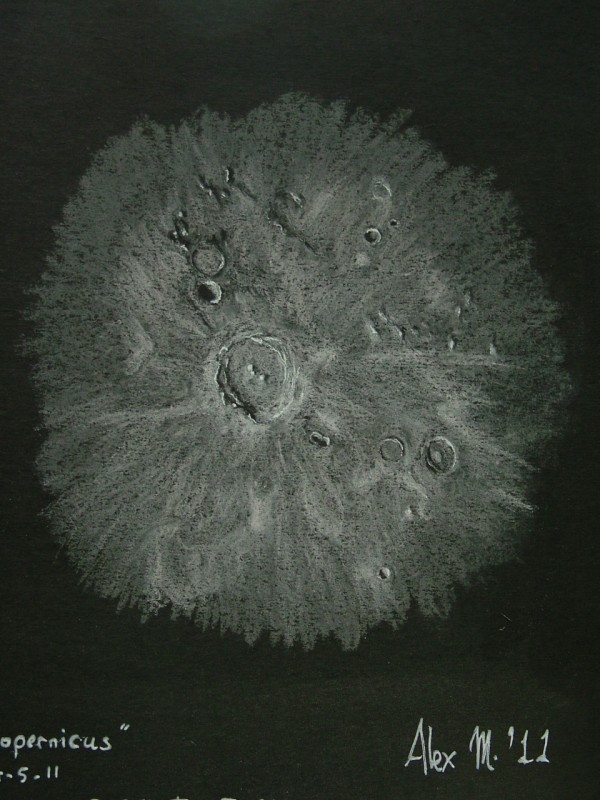 My original intension when I selected the crater Copernicus was to have the terminator line very close to it. I didn’t get my timing right by a long shot! Instead, it was closer to a Lunar mid-day, making the shadows very short.

I was hesitant to sketch it, having my expectations dashed, and took an hour before I decided “What the heck! Just do it”.

Conditions were quite good for Sydney. At the best of times, using 222X is barely useable, giving only fleeting moments of clarity. This night was more good than poor! And an added bonus, NO DEW!

This is the first time I’ve used charcoal and soft pastels to do such a finely detailed sketch. It took a little getting used to, but what I really like about this materials is you can build up the layers to achieve the result you want. I found them very forgiving, unlike the cold.

Two hours, a pot of tea to keep the cold at bay, and a gorgeous orange tube C8, and this is the result. 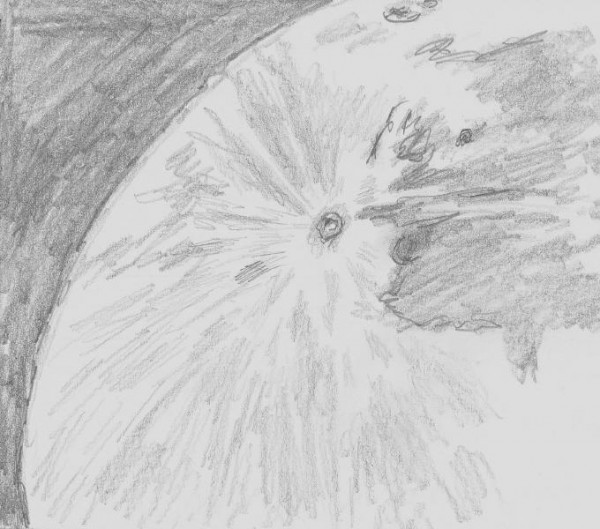 As I took in the beauty of the full moon at perigee, I noticed a small black object zip across the face of the moon. I thought I’d probably seen a satellite, but, a minute or two later I saw another one, and then another one, and then another, and they were definitely birds. They were all travelling in the same direction: North. After waiting about half an hour and seeing about twenty of them, and trying to take in the jizz of the form, the best I could do was narrow them down to swallows and martins. Do they migrate at night? Well, if so, this was a unique way to see my first hirundines of the year.

Seeing was very wobbly, preventing me from using high powers on the scope, so I eased back into low power and sketched the crater Tycho and its rays, which you can also see with the naked eye as they splat half way across the face of the full moon. I like sketching fast; it forces me to find the key features first. Tycho itself is not huge as lunar craters go, but it’s visible because it’s young and its rays have not yet eroded away. It’s estimated to be about 100 million years old which means that some dinosaurs and mammals probably saw it hit; it must have been spectacular.

The crater is named after Tycho Brahe, one of my heros. His accurate measurements of the stars and planets led to the later discovery, by Kepler, that the planets move in elliptical orbits around the sun, which in turn is the basis of universal gravitation. It’s not an exaggeration to say that Tycho paved the way for our modern understanding of the universe. And he has a rather beautiful crater named after him too.

One of the things that I spotted for the first time was that there are fewer bright rays pointing west (top in the picture), suggesting that the impactor that formed Tycho came in from that direction. 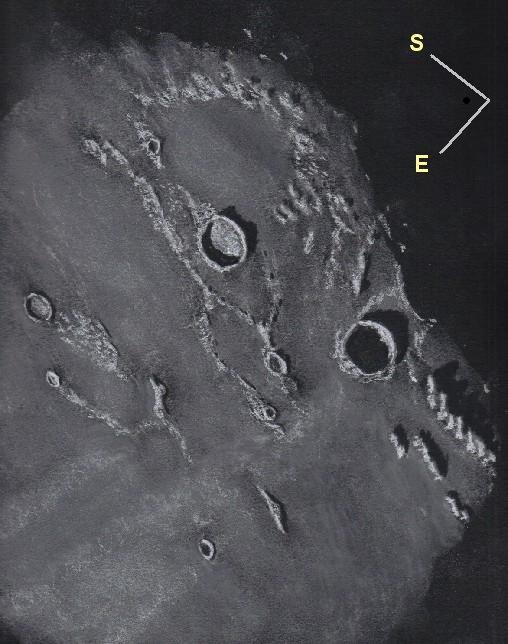 Craters Kepler and Encke    At nearly 11 days into the current lunation sunrise has just finished for the rim of crater Kepler. Even during this early morning view, some of the brightest rays of this crater were seen radiating eastward from the ramparts on that side. Kepler is a 31 kilometer diameter complex crater with a low central peak and a flat debris covered floor from inner wall slumping. As I saw it during the time of this sketch, the floor was in complete darkness and had the perception of great depth. Crater Kepler lies between the Oceanus Procellarum and the Mare Insularum both of which consist of dark surface lavas.

The Jesuit astronomer Giovanni Battista Riccioli named Crater Kepler about 28 years after the death of Johannes Kepler. He also named Crater Tycho after Tycho Brahe, the man with the accurate data measurements that helped make Kepler famous for his three laws of planetary motion.

I was hoping to include Rima Milichius in this sketch but the seeing was so poor I never saw a hint of it even at its widest part that would have been located in the lower left corner of the sketch. The other crater captured in this sketch is 1 kilometer smaller in diameter and 3 times older than Kepler. This is crater Encke named after 19th century German astronomer Johann Franz Encke. The rubble-covered floor of this crater was well illuminated because of its greater distance from the terminator and much shallower depth.