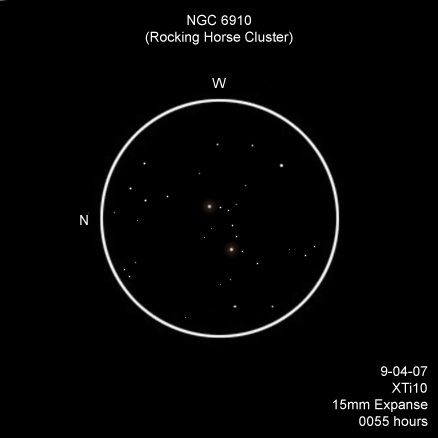 Original sketches are with a # 2 pencil, earser & rubbing stump on white paper

Originals are then scanned into PhotoShop and traced for accuracy of colors and
refinement.

All images have other pertinent information included. 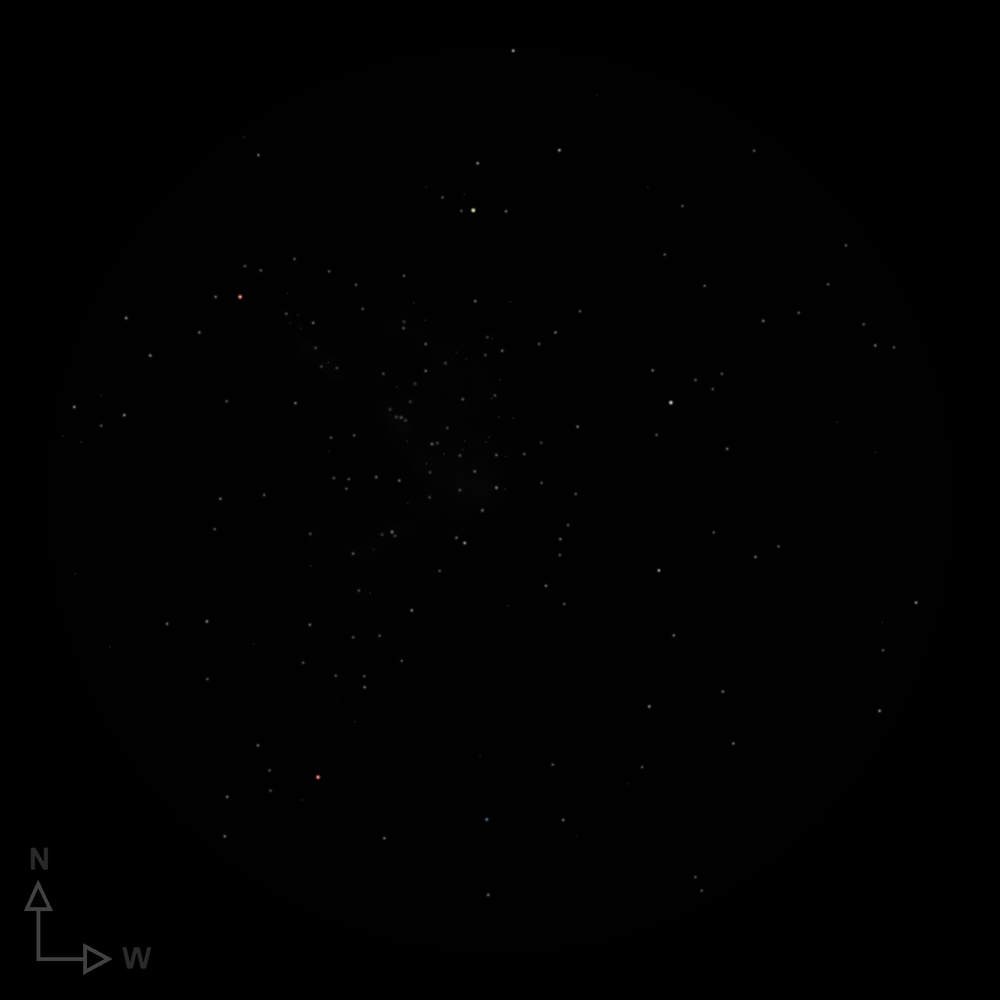 NGC 6939 is a subtle, yet beautiful open cluster in the southwestern reaches of
Cepheus, near the border with Cygnus.  NGC 6939 is famous for sharing a low-power
field of view with the spiral galaxy NGC 6946; this celestial odd-couple has been
the target of countless astrophotographs.  The juxtaposition of these two objects is
equally accessible to the visual observer with access to dark skies and a field of
view wide enough to accommodate the 38′ that separate the duo.

The most expeditious way for the star-hopper to locate this object is to center your
scope on 3rd magnitude Eta (η) Cephei and sweep about 1.5° east and just over 1°
south with your lowest-power, widest-field eyepiece.  At 30x, I see a fairly
conspicuous patch of nebulosity studded with a few dozen faint stars nestled in a
very rich patch of the Milky Way.  The spiral galaxy NGC 6946 glows feebly ½° away
to the southeast.

Zeroing in on this stellar concentration with higher magnifications brings out a
delicate array of faint stars ranging from magnitude 11 down to 14 and beyond.  The
soft, often glittering haze of unresolved stars persists in the background even at
high magnifications.  The stars seem to be arranged in strands stretching toward the
east like gleaming dewdrops in a broken spider’s web.  In that direction (east) it
is very difficult to discern where the cluster ends and the starry expanse of the
Milky Way begins.  The western edge of the cluster, in contrast is sharply defined,
particularly on the southwestern side.  This sudden drop-off in the stellar
population gives me the impression of an interposing finger of dark nebulosity
thrusting northwestward.

Sir William Herschel discovered NGC 6969 on September 9, 1798 with his 18.7-inch
reflector.  This cluster lies at a distance of about 4,000 light-years and is
believed to be 1.8 billion years old based on the Hertzsprung-Russell diagram of its
constituent stars. 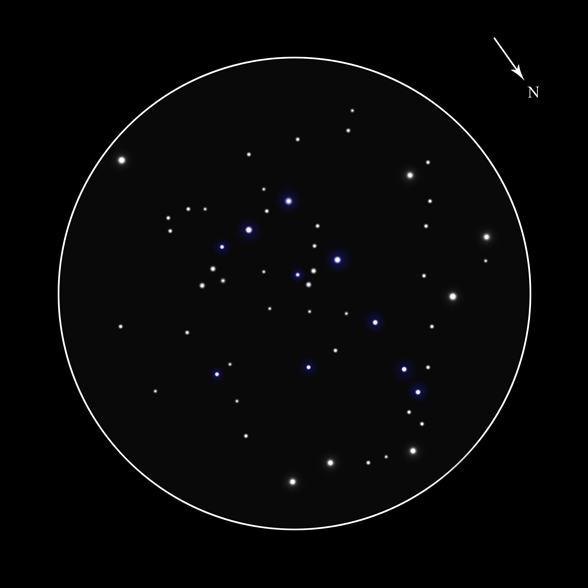 M 44, also called Praesepe or Beehive, is one of the greatest Open
Clusters of the night sky. Consisting of many bright stars, it is
already visible with the naked eye, the best view, however, is provided
by binoculars or a rich field telescope, which show M 44 in all her
magnificent beauty. The 1.5° FOV the Newtonian provided, when I sketched
this, was already way to small to show all the stars belonging to this
great cluster. 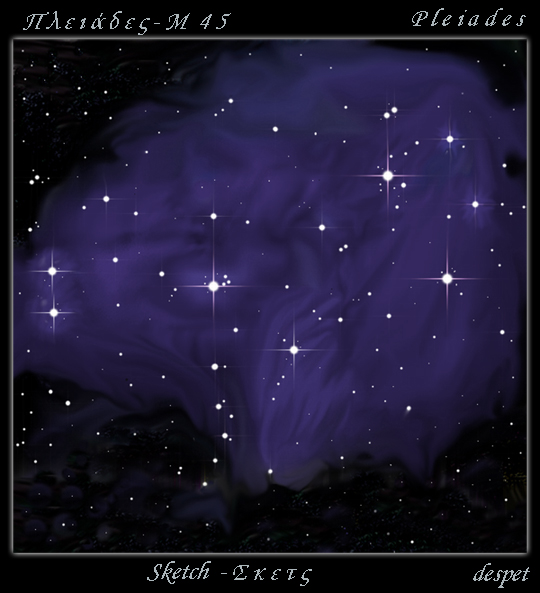 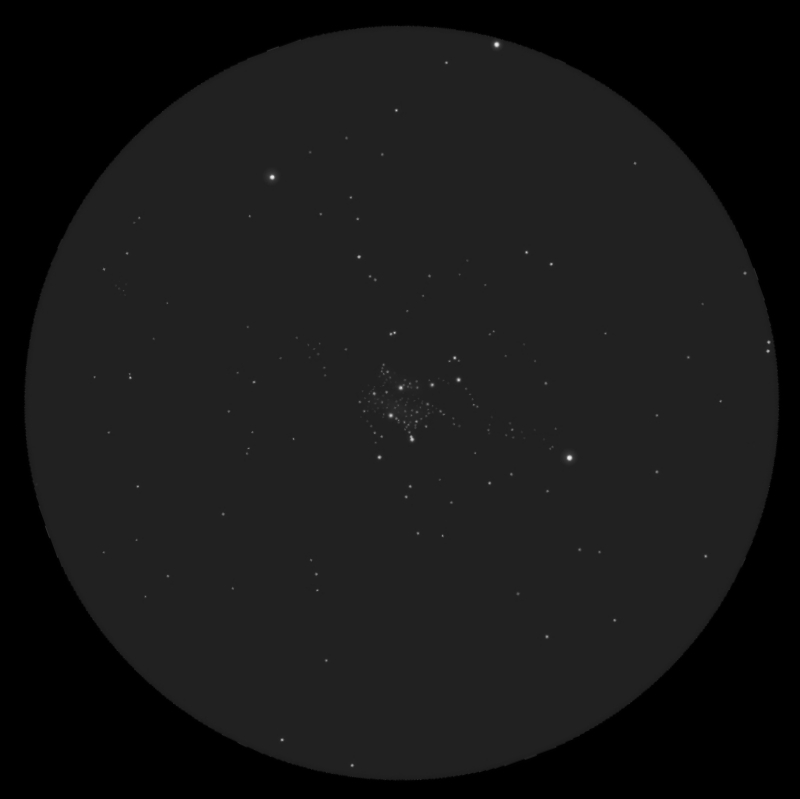 Here’s my first observation with the SkyWatcher. This rich field scope gives a whole
new perspective on deep-sky objects. With a SP 26mm EP, I get a whopping 2.7 degrees
field of view at a power of x19. I hope you like the view.

Digital sketch made with Photopaint, based on a raw pencil sketch made behind the EP.
N down, W left orientation.
Rony De Laet 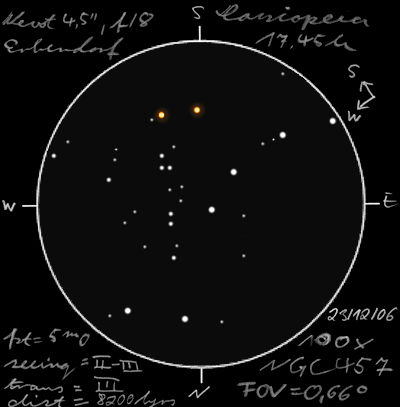 NGC 457 is a beautiful Open Cluster in the Constellation Cassiopeia with
a pretty interesting shape: the two brightest stars, which glow in a
warm golden-yellow, form the two eyes of an owl, the rest of the stars
comprise the beak, the wings, the body and the claws, hence the name
“The Owl Cluster”. It is not difficult to draw and easily accessible with all
kinds of telescopes and thus well worth a visit. 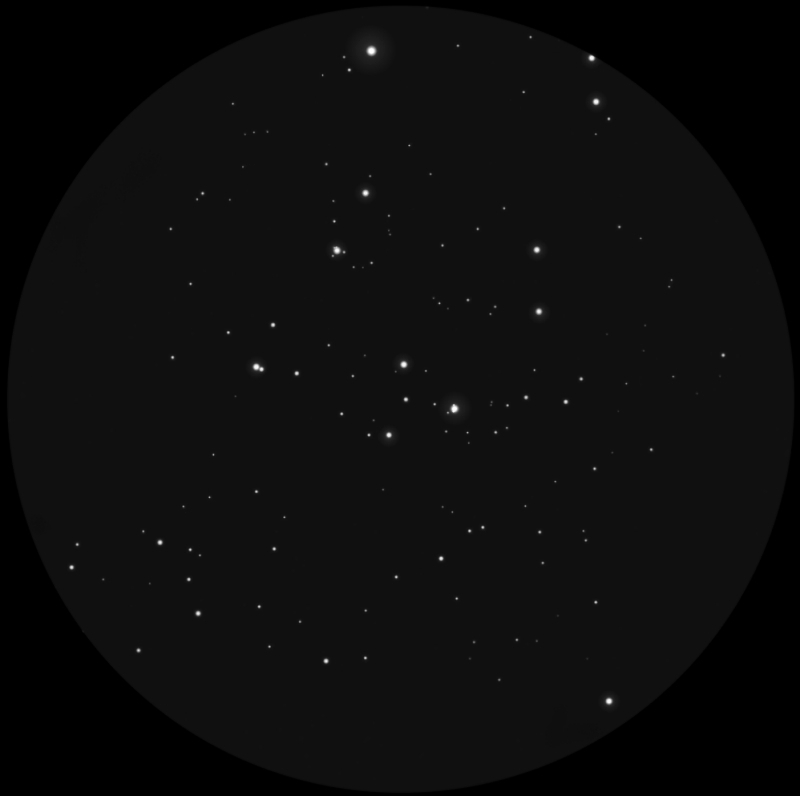 What is called the second closest star cluster to our sun? Looking at it with a
scope is of little use, because the grouping covers about 5° of sky. Some of its
stars look so bright in a scope, as if one can almost touch them. So here it is, my
impression of this beautiful naked eye cluster. I used the lowest power available,
but even the fov of 3° is not large enough to cover the cluster. So the sketch is a
composite image of overlapping observations. Because of the low power, the sky-glow
washes out al stars fainter than mag 10.9. I hope you like my impression. 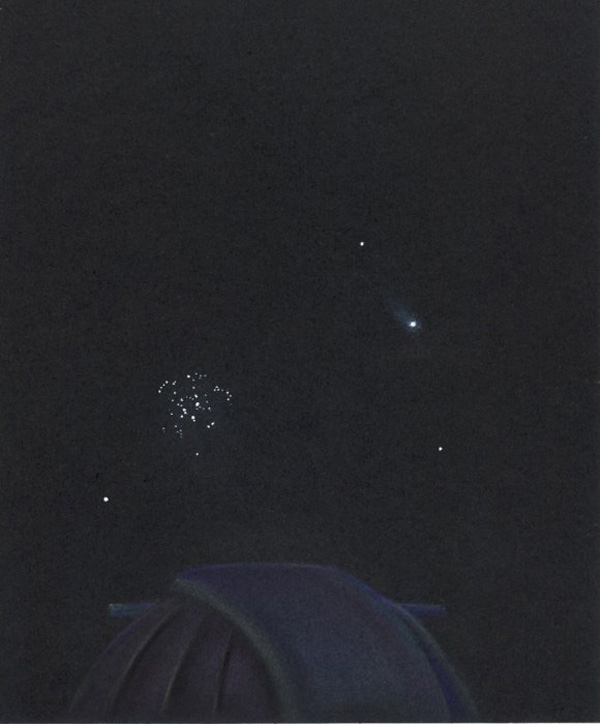 Back in the late spring of 2004 I had the opportunity to attend an astronomy
evening at the old Royal Greenwich Observatory (RGO) at Herstmonceux in
Sussex, England. The weather was dreadful, stormy and rainy, when the
evening began, but by the time the lecture had finished the skies were
clearing rapidly and we were able to catch sight of Comet C/2001 Q4 (NEAT),
a fleeting visitor gracing the region of the ‘Beehive’ cluster (M44) at this
time. The comet was just visible as a naked eye object, but binoculars gave
the best view. This is a reworked pastel and acrylic sketch from my
original, very hastily scribbled graphite binocular sketch. One of the
distinctive copper observatory domes provides foreground interest. 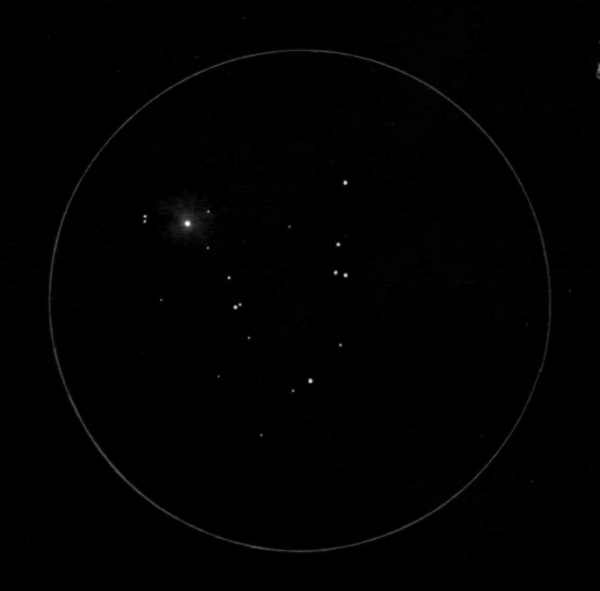 Here is a lawn chair observation under the freezing Austrian sky at 800m asl. It is
a simple but pleasant sketch of the Bull’s face. I was surprised to notice 3 pairs
of stars. The sky was not perfect dark, so there should be more stars to be picked
out from the cluster. Anyway, scopeless stargazing can be fun ! No cooldown time
needed. My legs and hands cooled down anyway at -9°Celsius. (a solid fuel hand
warmer is a must have) 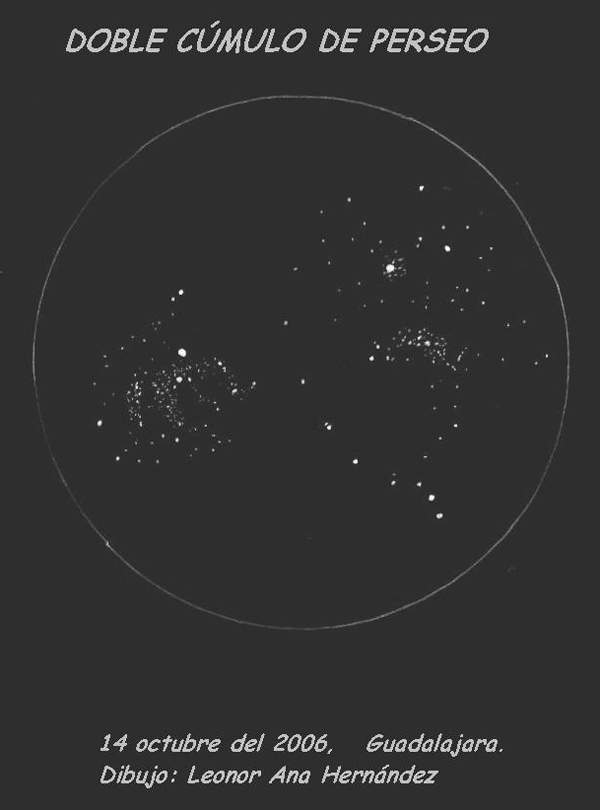 The object is “h x Perseii” the double cluster in Persei,  through the
telescope it seems to be a pair of cherries hanging on a little tail.

The telescope is a Meade 8″ and observing through a Swan ocular 36 mm
with a big field of vision. I made it with a pencil on a white paper but with some
problems, because the night was very bad, almost covered by clouds moving very
fast, that covered the image through the telescope. It was very hard to sketch in these
conditions, but I was enjoying it very much. This is the original hand made with and
later changed to negative with the computer.