The three comet sketches shown here were made by American astronomer and former
director of Harvard College Observatory, George Phillips Bond, son of the first
director William Cranch Bond. George discovered eleven comets and worked closely
with his father at Harvard College Observatory. Together the Bonds are credited
with the discovery of Saturn’s moon Hyperion at the same time famous British
astronomer and co-discoverer, William Lassell, also spotted it in 1848. The Bonds
were also credited with the discovery of the dusty crepe ring as William Lassell
later named it. 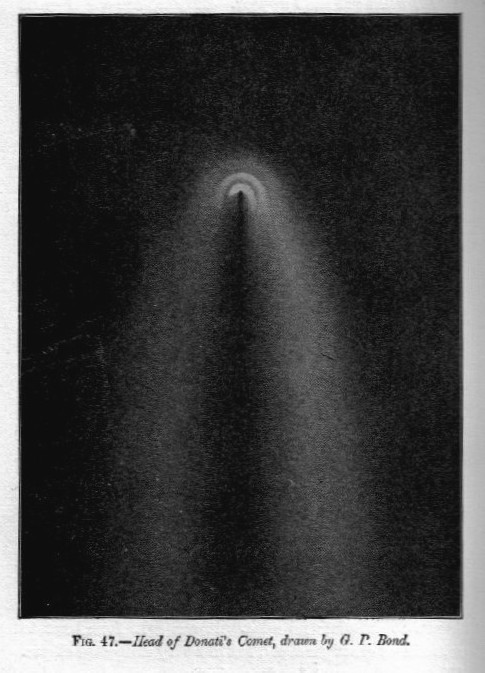 Using the new Daguerre’s photographic process, George P. Bond took the first
photograph of a star (Vega) in 1850 and within 7 years he was photographing double
stars like Mizar and attempting to use photography to determine stellar
magnitudes. 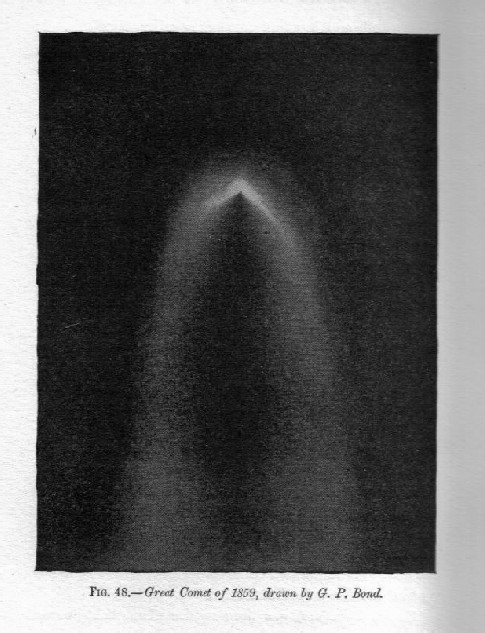 One of the most spectacular comets of the 19th century was Donati’s comet named
after its Italian discoverer in Florence. This comet reached a magnitude of -1 in
September of 1858 and had a tail extending 60° across the sky. The first sketch of
Donati’s comet was made without optical aid. The second sketch was made at the
eyepiece of the Harvard College Observatory’s 15 inch refractor. The last sketch
was made at the eyepiece of the same telescope of another comet the following year
called ‘the Great Comet of 1859’. In that same year George took over the
directorship of the observatory from his father. Six years later George P. Bond
died of tuberculosis before reaching his 40th birthday. 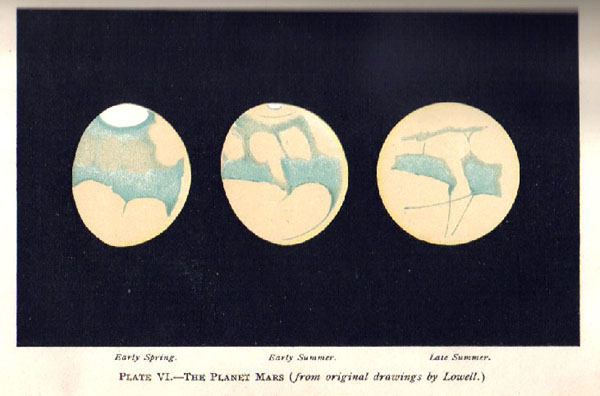 “Imagination is as vital to any advance in science as learning and precision are
essential for starting points.”
-Percival Lowell


Percival Lowell (1855-1916) was fairly new to astronomy in 1894. After leaving the
family business in Boston and traveling and working in Asia, he spent the last 23
years of his life in astronomy. The observatory on “Mars Hill” in Flagstaff,
Arizona was ready in 1894 for the great Mars opposition that year thanks to the
assistance of William Pickering and Andrew Douglass. Quickly erected mountings and
housings for two loaner refractors (12 inch and 18 inch) were in place for this
event in 1894. The sketches by Lowell above are centered on the Hesperia region in
all three drawings and are separate by about 3 month intervals in time. The first
drawing shows the large south polar cap and was made June 7, 1894 note the gibbous
phase here 5 months before opposition. 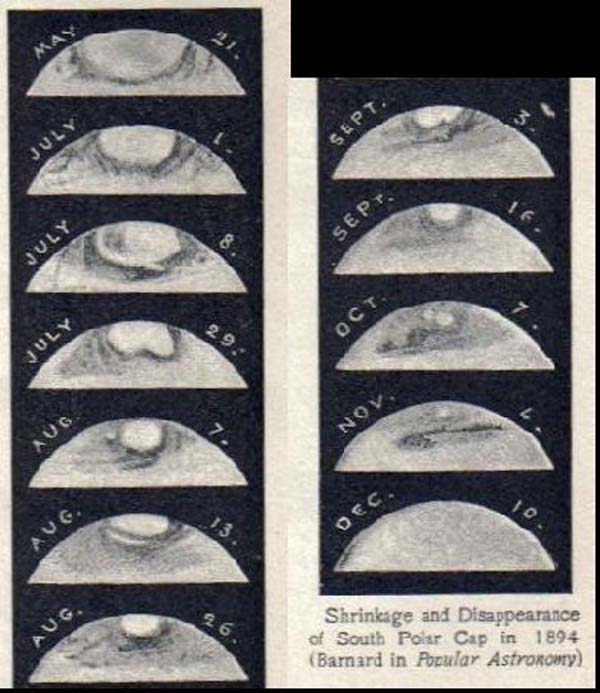 “It is quite possible we may have formed entirely erroneous ideas of what we
actually see. The greenish gray patches may not be seas at all, or the ruddy
continents, solid land. Neither may the obscuring patches be clouds of vapor. “
-Edward E. Barnard

At the same time nearly 1000 miles away at Mount Hamilton’s (Lick Observatory)
eagle eyed Edward Emerson Barnard (1857-1923) was observing and sketching Mars
during his last year at Lick Observatory before taking a position at the
University of Chicago and Yerkes Observatory (Williams Bay, Wisconsin). Most of
his observing time was spent using the 36 inch Clark refractor but other scopes on
the mountain were used when telescope time on the large refractor was not
available. Barnard never saw the “canals” described and drawn by Schiaparelli and
Lowell. This sequence of drawings by Barnard shows the shrinkage of the south
polar cap from May to December 1894.

The Drawings are from: David P. Todd’s, A New Astronomy © 1897, American Book Company 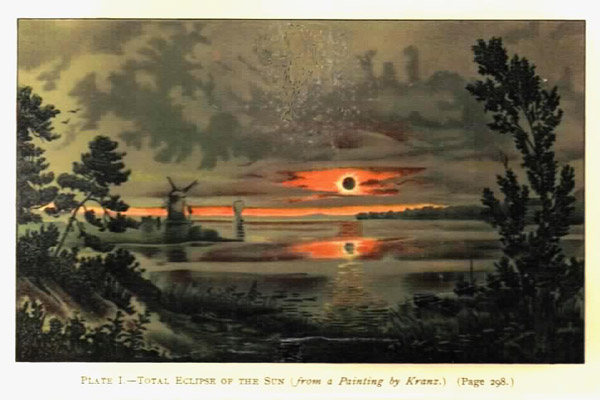 This is a painting in David P. Todd’s, A New Astronomy © 1897, American Book
Company by the 19th century German painter W. Kranz. Unfortunately this beautiful
plate is water damaged top center in my copy of the textbook. The author retrieved
this plate from “Himmel und erde” edited by Dr. Schwahn. Another painting by Kranz
can be found at the LPOD website May 29, 2006. The image on LPOD is a poorly
scanned copy. I have seen a number of Kranz’s drawings and paintings and I tend to
think of him as a19th century forerunner to the great 20th century artist, Chesley
Bonestell.

David P. Todd writes this on pages 297-298 about W. Kranz’s painting in the
frontispiece:

“…Total eclipses occurring near the middle of the year are longest, if at the same
time the moon is near perigee, and their paths fall within the tropics. Always
after total eclipse is over, the partial phase begins again, growing smaller and
smaller and the sun getting continually brighter, until last contact when full
sunlight has returned.… If the atmosphere is saturated with aqueous vapor, weird
color effects ensue, by no means overdrawn in the frontispiece.” 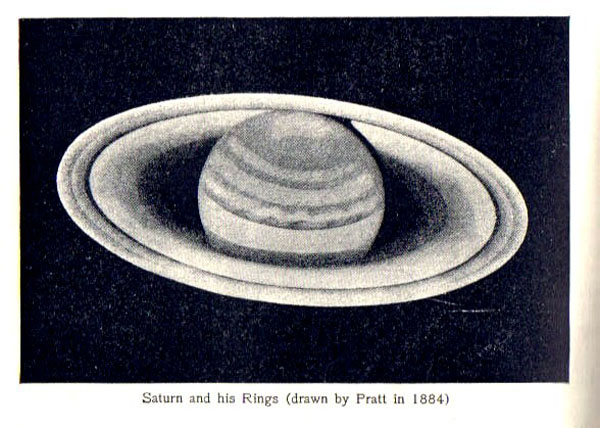 These two sketches of Saturn appear in David P. Todd’s, A New Astronomy © 1897,
American Book Company. The first is drawn by British astronomer Henry Pratt made
on the evening of February 11, 1884 using an 8.15 inch clock driven Newtonian
telescope working at 450 power. It shows the rings of Saturn tilted most favorably
toward the earth. It appears on page 366 of Todd’s book. A brief article written
by Henry Pratt can be found in the Monthly Notices of the Royal Astronomical
Society, Volume 44, June 1884, p. 407 the article is titled: The Physical Features
of Saturn, 1884.

The second Saturn sketch in David P. Todd’s, A New Astronomy © 1897,
American Book Company which appears on page 18 was made by the well
known American astronomer Edward Emerson Barnard at Lick Observatory
in 1894 (10 years after Pratt’s sketch). E.E. Barnard just 3 years before
rendering  this sketch, had discovered Jupiter’s 5th moon Amalthea only
11 days after he was given permission to use the Alvan Clark 36 inch
Refractor telescope on Mount Hamilton. Note the change in appearance
of Saturn’s rings in the 10 years between sketches.

The full-length biography E. E. Barnard by William Sheehan, published in 1995, is
a truly remarkable story of triumph in the face adversity. The book is titled: The
Immortal Fire Within – The Life and Work of Edward Emerson Barnard. 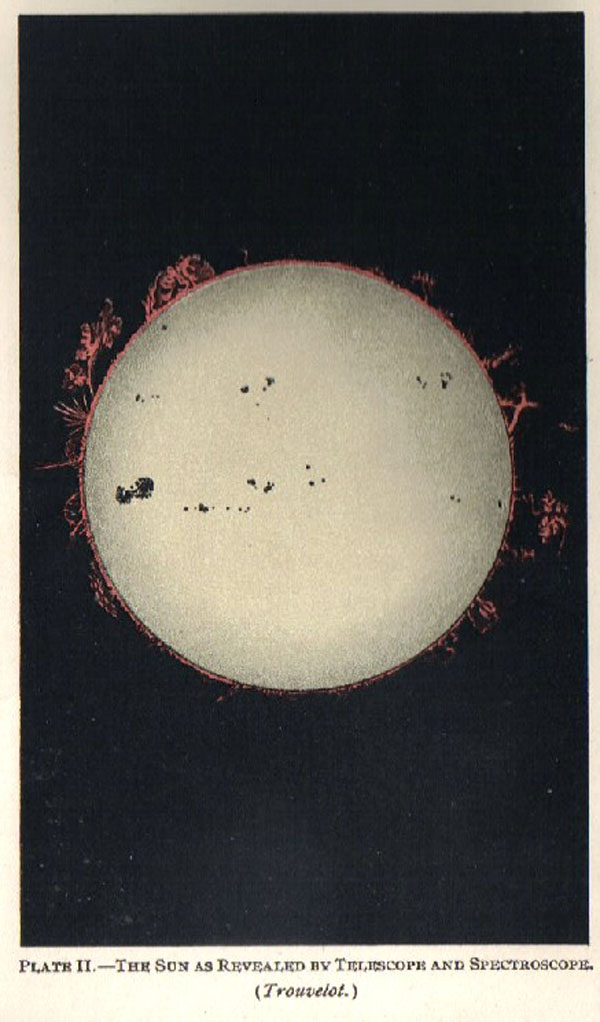 Etienne Leopold Trouvelot (12/26/1827- 4/22/1895) was French born (Aisne, France)
Astronomer/Artist that came to the United States of America in 1852 with his family.
After seeing his drawings, the directory of Harvard College Observatory invited
him to join the staff as a  member in 1872.  During his astronomy years he made
thousands of excellent illustrations and particularly enjoyed drawing the sun.
Sixteen years before his death he returned to France and died in Meudon, France.
In the history of biology and particularly entomology (study of insects) he was
the person  know to accidently release a collection of Gypsy moth larvae into the
woods in Medford, Massachusetts. He was attempting by experimental cross breeding
to give disease prone silk moths the disease resistance of Gypsy moths imported
from Europe. Gypsy moths spread westward and northward and remain a pest insect in
North America to this day.   A 9 km lunar crater on the south wall of Vallis Alpes is named for him.
The attached solar drawing by Trouvelot is between pages 10 and 11 as Plate II in
David P. Todd’s, A New Astronomy © 1897, American Book Company 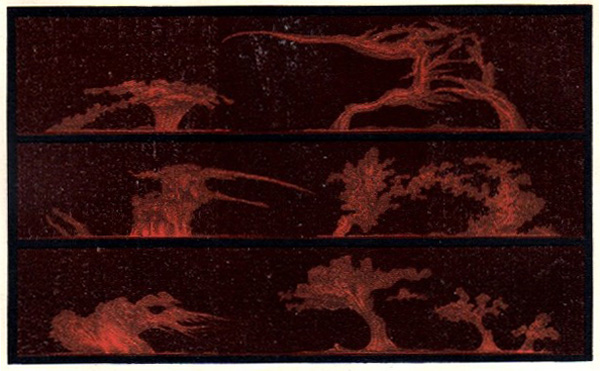 The second drawing by Trouvelot is between pages 282 and 283 as Plate V-Solar
Prominences in David P. Todd’s, A New Astronomy © 1897, American Book Company 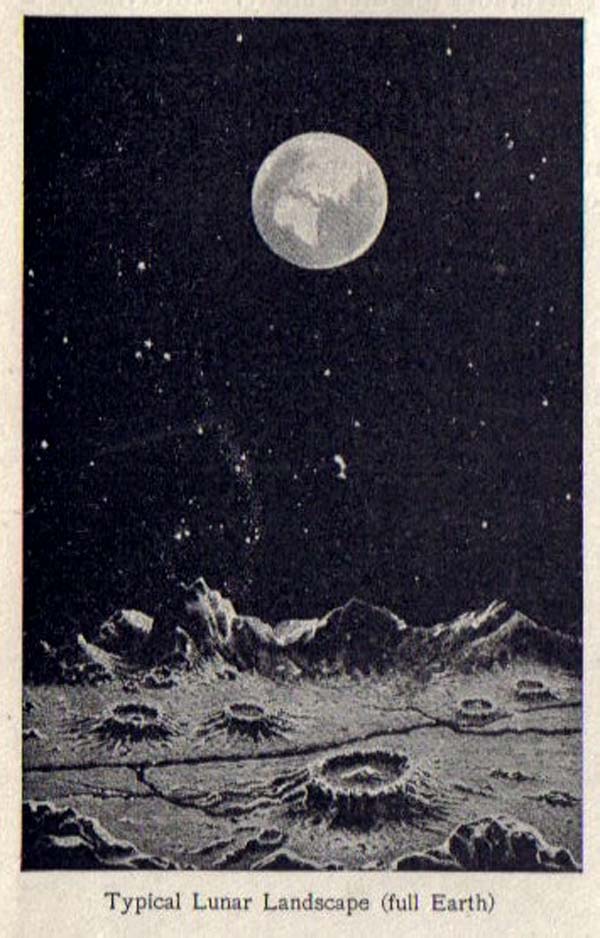 As mentioned in the preface on page 4 some of the illustrations have been
re-engraved from the Lehrbuch der Kosmischen Physik of Miller and Peters. A number
of drawings in this text are not credited. One titled a “Typical Lunar Landscape
(full Earth) is the third drawing attached.