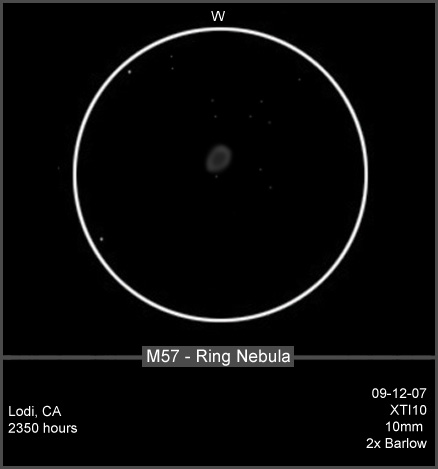 Original sketches are with a # 2 pencil, earser & rubbing stump on white paper

Originals are then scanned into PhotoShop and traced for accuracy of colors and
refinement.

All images have other pertinent information included.
Wade V. Corbeil 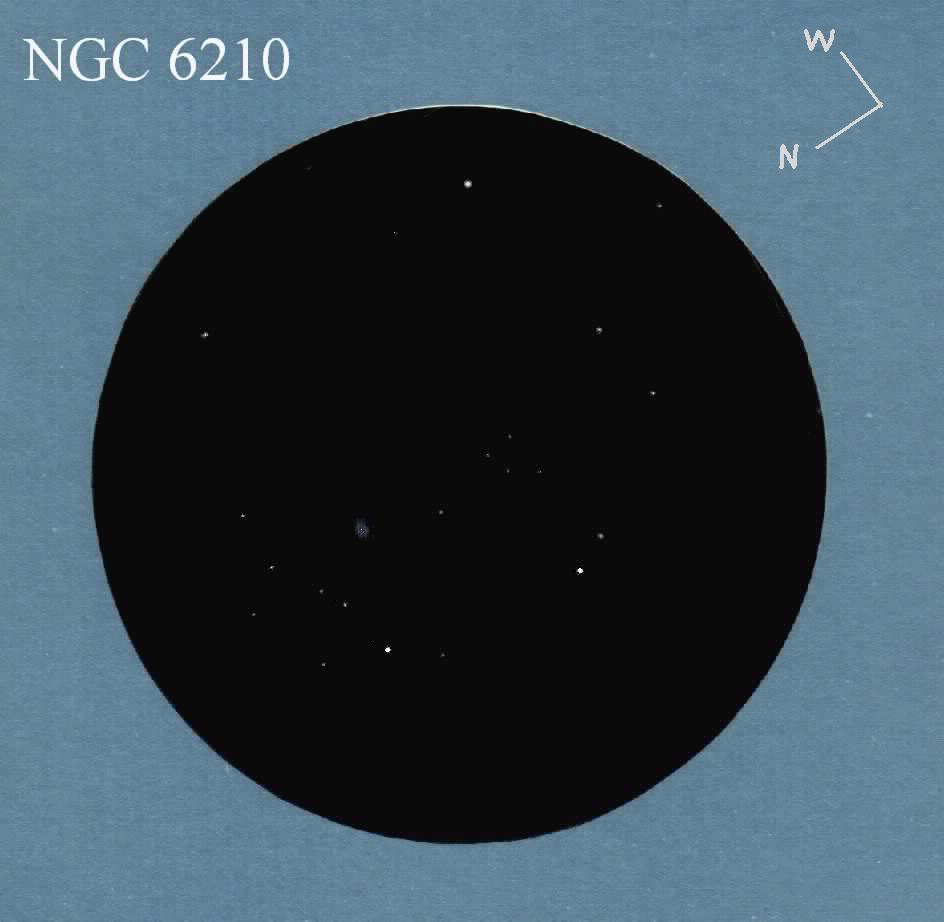 Now that summer is winding down in the northern hemisphere, we are approaching the
time when the constellation Hercules is getting lower in the western sky after
evening twilight. Soon it will be too low for ideal evening observation until next
year. Of the three brightest planetaries in Hercules, the one that wins out is NGC
6210. This little bluish planetary nebula is easily located south of the keystone
and glows at magnitude 8.8. The nebula appears slightly elongated in the east-west
direction and sports a 12.5 magnitude central star. The diameter appears to be
about 13” of arc and with a narrow band filter just a bit larger. This planetary
is estimated to be about 6500 light years away. 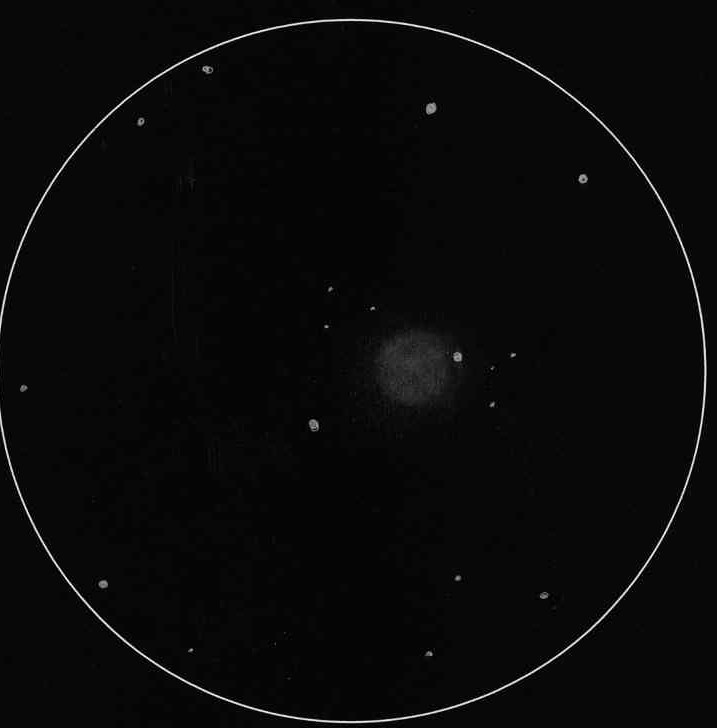 I have a very dear friend who inspired this little deep sky sketch and I wish to
share the story with you.
Stan Waterman and I are very close friends but as astronomers we are ‘poles’
apart. Stan a scientist never looks through his telescopes he uses them as lenses
for his mighty camera. His aim is to locate extra solar planets by measuring the
minute dimming of their stellar light. Clear night after clear night he captures
the photons on his chip from 20,000 distant suns in Cygnus and run’s them through
his self written software program to look for dips. He has been doing this for 5
years and has amassed terabytes of data.
I for my sins am a visual observer and a romancer of the heavens stealing my
photons with pencil and pastel.

In other ways Stan and I are much closer, we both love with a passion all of
natures splendours and discuss its wonders over coffee when our busy lives allow.
We enjoy looking at the star patterns on the PC monitor that his camera has
capture in such profusion. A number of times we have wondered together over an
eye catching pretty, round planetary nebula caught in the web of stars.
These shared wondering inspired me to point my own telescope into Cygnus to
located this memorial to a once fine star and capture it with my pencil. 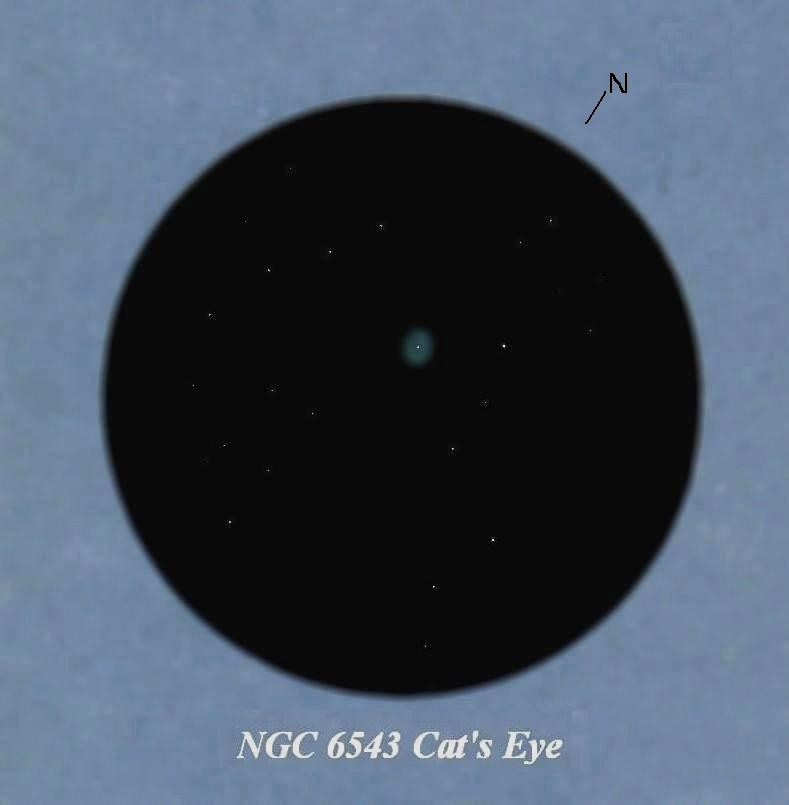 One of the better known bright summer planetary nebulas in the constellation of Draco is NGC 6543. This blue-green planetary appears to be about one third of a minute of arc across, although its “outer corona” brings it out to about six arc minutes. The brightest part of this “outer corona” is IC 4677. None of this outer region can be seen from my urban site. The glow around the dying, hot, type O central star (or perhaps close binary pair) appears homogenous. None of the curlicue compressed gas loops were visible that can be seen in photographs. Some darkness was seen around the tenth magnitude central star. At a visual magnitude of 8.1 and at a distance of somewhere between 3300-3600 light years, this thousand year old planetary nebula looks great in telescopes much smaller than 18 inches. 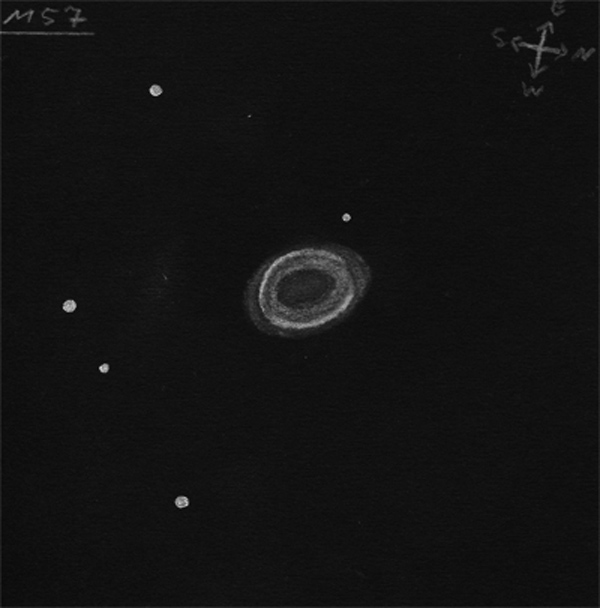 This was my second attempt at sketching it, this time I used an
OIII-filter and there is no way of telling what a difference it made.
The nebula, which had before just appeared as an even ring with a
somewhat milky center, suddenly started to reveal many details, darker
and lighter areas, an elongated halo – all of which convinced me that
apart from a good sky and obersving experience an OIII-filter is one of
the most powerful tools at the hands of an observer of planetary nebulae.

The drawing, which was done with white pastels on black cardboard again,
turned out pretty well. 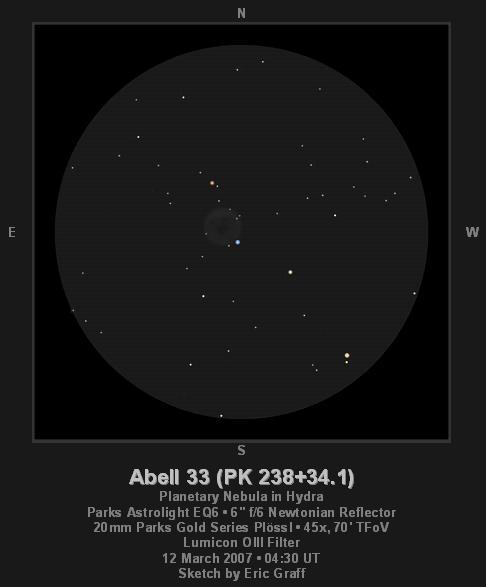 Ghost of a dying star

In the western reaches of elongated Hydra, near the western border of Sextans you will find a ragged string of four stars ranging in magnitude from 6 to 8 aligned northeast to southwest located 1.7° south of 4th magnitude Iota Hydrae and 2.5° east of 5th magnitude Tau1 Hydrae (a fine, widely spaced double star). The third star from the west (and slightly out of line with the other three stars) is 7th magnitude HD 83535. This bluish-white star is superimposed on the edge of a ghostly planetary nebula known as Abell 33. My best view of this limpid pool of nebulosity was achieved with a 20mm Plössl (yielding a magnification of 45x) and an OIII filter. This setup revealed a small faint disk of tenuous nebulosity about 4½’ in diameter in contact with the 7th magnitude star on its southwest edge. The edges of the disk were reasonably sharp and the brightness faded gradually toward the darkened center. At other magnifications (both with and without the filter) the view was less distinct and the nebula became almost impossible to detect at magnifications above 60x. The 16th magnitude central star was not visible, but a trio of 13th magnitude stars (two of them a close pair) are perched on the northwestern edge of the nebula.

Abell 33 was discovered on Palomar Observatory Sky Survey plates by George O. Abell and published in the April 1966 Astrophysical Journal (Abell 1966). These nebulae, being very faint and of relatively large angular size are classified as ‘old’ or ‘evolved’ planetary nebulae. Observing the 86 objects in Abell’s catalogue constitutes one of the supreme observing challenges for amateur astronomers with large-aperture scopes; fortunately a few of them, including this one, are accessible in fairly modest equipment provided the observer has access to very dark skies and an OIII filter. Recent estimates place Abell 33 at a distance of about 1,100 light years from Earth (Phillips 2005), which implies an actual diameter of about 1.4 light years.