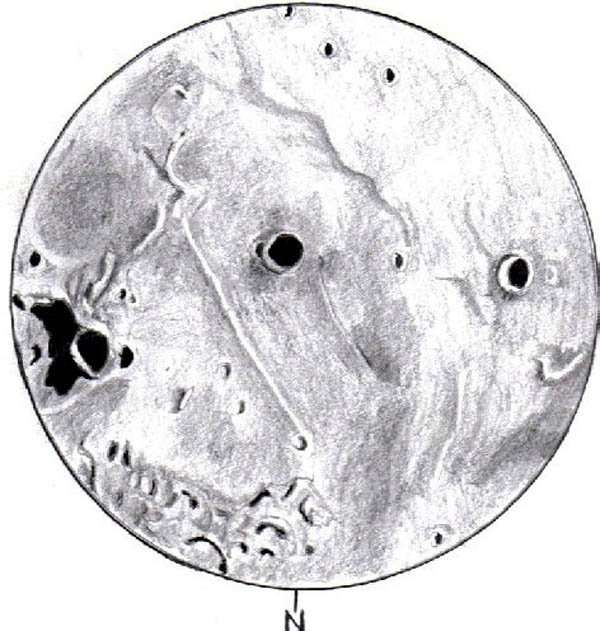 In the morning hours before sun-up the early waning crescent moon was superimposed
on the firmament just west of the Pleiades. I was somewhat transfixed by this
scene but I was set up to sketch “straight wall” on the floor of the lunar Sea of
Clouds. From the eastern edge of Mare Nubium you can see the Triplet craters
Thebit (57 km), A and L. Next moving westward is the Imbrian escarpment Rupes
Recta , not a true wall in the usual sense but on one side standing more than 300
meters high at some  points and 114 km in length. The scarp face would be visible
from crater Birt (17 km) to the west, the youngest of the larger craters sketched
here. Touching the rim of Birt to the east is Birt A.  Continuing westward we see
Rima Birt a 51 km rille from the Imbriam epoch. At the end of the rille to the
south, is tiny 3 km crater Birt F seen in this sketch. Finally sitting on a
wrinkle in the floor of the mare is crater Nicollet (15 km) a Eratosthenian epoch
impact scar. 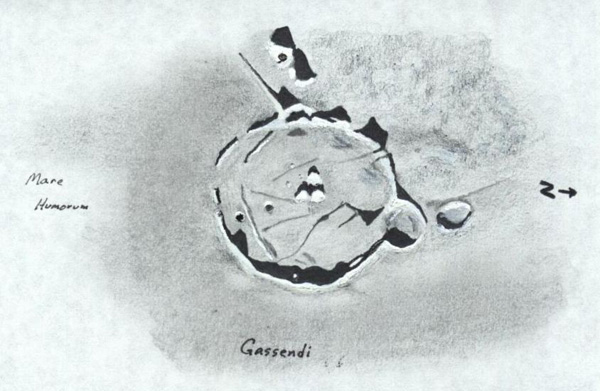 Gassendi is my favourite crater due to its many varied features.  This
crater has it all, with central peaks, craterlets,  internal rilles,
and a breached crater wall where the Sea of Moisture has flooded in.
It also  borders onto a rough highland region. You can spend a lot of
time just taking in the whole view let alone trying to sketch it.  In
fact the biggest problem that one faces when doing lunar sketches has to
be deciding on the level of detail to include.   Sketch was done April
30/2004  using graphite pencils, black ink and whiteout on white
paper.   Telescope was a 6″ Maksutov Newtonian with binoviewer 20mm
eyepieces and 2x barlow. 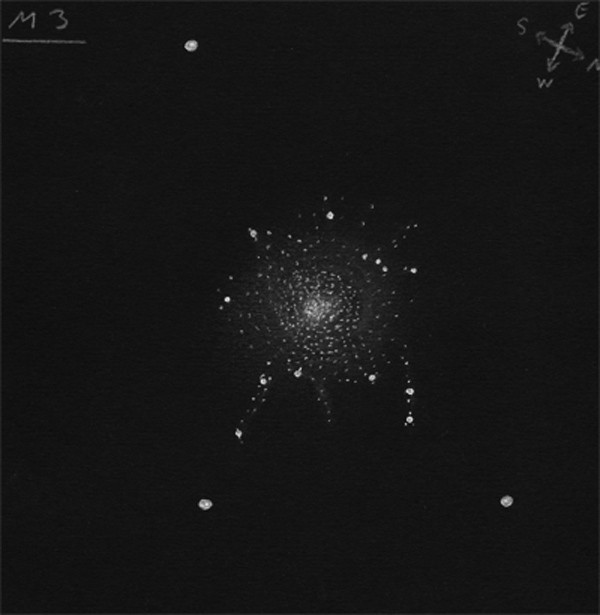 Drawing Globulars has always been a nerve-wrecking experience to me, so
many stars, all just lighting up for the split of a second in the corner
of your eye, what do you draw, what can you leave out, what the heck do
you really see?

The more delighting it is, when you suddenly realize, not only you
slowly get the hang of it, but the results are actually not even bad,
maybe even some of the better drawings in your whole catalog.
That’s exactly what happened with M 3, creating it was a pain, but the
result is highly presentable – at least that’s what I think!

The most fascinating thing about Globular Clusters is their age, they are
ancient, they’ve seen aeons on their way around the galactic center,
they’ve inhabitated this Galaxy ages before any human being has ever set
foot on this Earth, ages before Earth even existed. Reason enough to
catch a fleeting glimpse of those objects – measured by our lifespan,
not by theirs, they’re gonna be around long after the human race has
vanished again into the void. 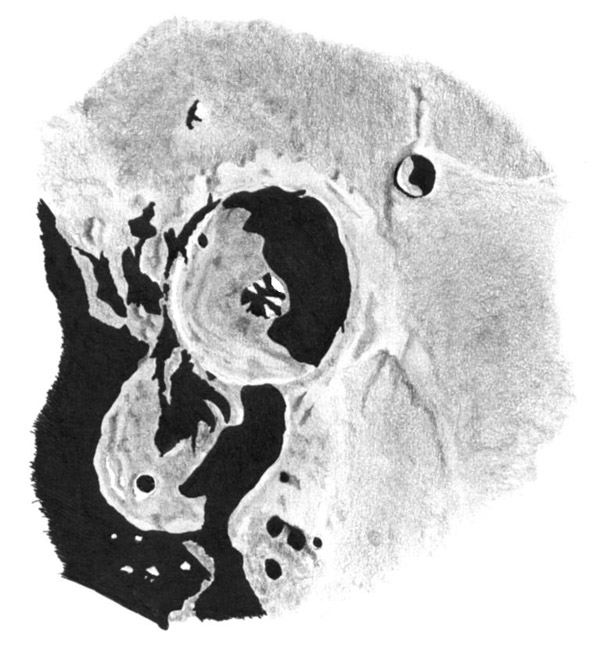 Theophilus and Cyrillus at Sunrise

At the public star party last month (March) with the moon at the same
phase, I used a similar scope setup trained on these same craters to
illicit some “oohs”  and “wows” from the crowd.   After spending most of
the time looking at these craters I realized that the pair was quite
‘photogenic’ and would make for a nice sketch.    This month,  they were
even more strategically placed to reveal the terrain.  The smaller
crater Madler was also quite interesting and included.    One thing that
made this sketch a bit out of the ordinary was the unusual interior to
Cyrillus which has some unusual landscapes near the border with
Theophilus.  The light and shadows between Theophilus and the terminator
was also unusual and complicated.  My first sketch in over a year; it
seems I’m slowing up.  Taking this much time to capture all the details
is not the best for accuracy on transient lighting on lunar features. 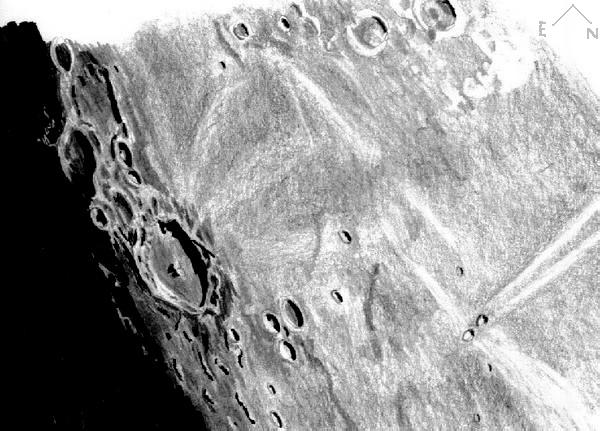 Langrenus at the Edge of the Sea of Fertility

With the Harvest moon just past and the shadow of the setting sun approaching the eastern shore of the Sea of Fertility, crater Langrenus stands out in all its glory. Langrenus is an Eratosthenian Period crater, between one and three billion years old. This crater is about 133 km. in diameter with a rim 2.6 km. above the bright, mostly flat floor. Mountain peaks near the center stand 1 km. high. Rays from the crater can be seen projecting in a westward direction across the Sea of Fertility. Much older (four billion plus years) and slightly larger than Langrenus to the south along the terminator is the crater basin Vendelinus. The walls of this crater were dealt crushing blows delivered by the impacts that created craters Lohse, Lame  and Holden which are drawn clockwise from north to south. Many additional smaller crater impacts on Vendelinus attest to the age of this old battered basin.

More than 400 km. to the northwest, grazing angle impaction created the craters Messier and Messier A. These craters exhibit a long pair of rays extending westward across the remainder of the mare. Note the perpendicular (north-south) rays centered on Messier. Laboratory experiments have demonstrated this pattern of so called “butterfly rays” can be duplicated with shallow angle high speed impacts.

Sketching:
For this sketch I used: white copy paper 6”x 8”, and a 2HB graphite pencil
at the eyepiece with the addition of marker ink to darken shadows indoors.