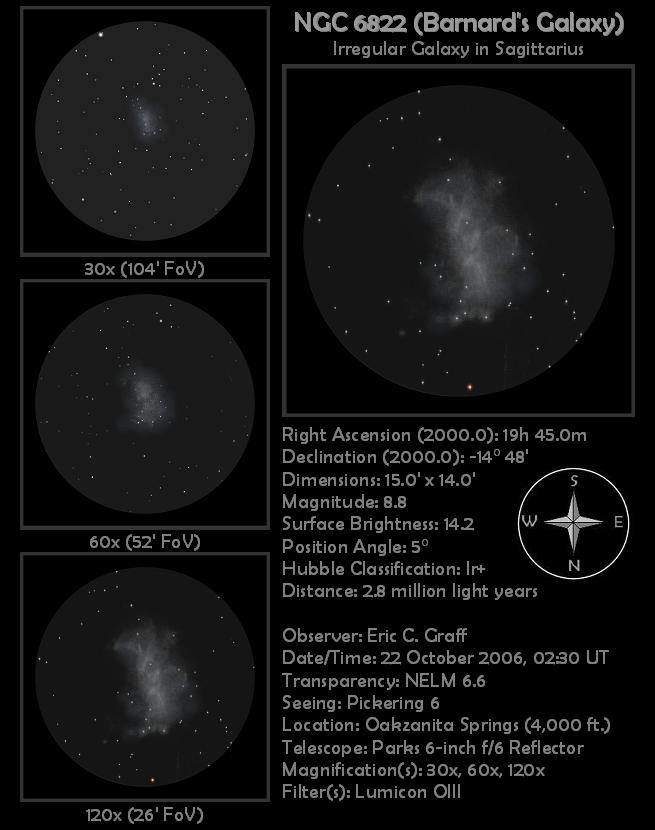 NGC 6822 is a dwarf irregular galaxy and a member of the Local Group at a distance of 2.8 million light years. As such it is the best example of a dwarf irregular galaxy accessible to observers in the northern hemisphere. This galaxy was discovered visually by renowned astronomer Edward Emerson Barnard using the 5-inch Byrne refractor at Vanderbilt University in 1884. It is named Barnard’s Galaxy in his honor. In 1924 Edwin Hubble resolved NGC 6822 to its core in photographs with the 100-inch telescope at Mt. Wilson and discovered many Cepheid variable stars in the galaxy. Recent studies by the Hubble Space Telescope have suggested that the galaxy has maintained a relatively stable rate of star formation over the past 12-15 billion years.

Here are a few things to keep in mind, and look for, as you observe this object: NGC 6822 is one of those strange objects that apparently become more difficult to see with increasing aperture. Hubble noted that the object was easy in a 4-inch finderscope, but nearly impossible to detect visually in the Mt. Wilson 100-inch. Luginbuhl and Skiff in their Observing Handbook and Catalogue of Deep-Sky Objects, mention a similar effect as aperture is increased from 6 cm (2.4 inches) to 30 cm (12 inches). Robert Burnham Jr. “found the galaxy not particularly difficult” in 6-10 inch scopes at low power and estimated that it was easier to detect than the Veil Nebula in Cygnus (without a filter, I presume). Stephen James O’Meara suggests that it might be possible for amateurs to visually detect individual stars in NGC 6822 with “small telescopes”, suggesting Burnham’s estimate of 15th magnitude for the brightest stars is a little on the faint side. O’Meara also claims to have detected a pale green tinge in this galaxy.

I swept up NGC 6822 (panning due west from Beta Capricorni) in the 30mm Plössl (30x magnification), just northeast of the 5th magnitude star HD 186185 in Sagittarius. In fact, I swept right past this low-surface brightness spectre on my first try. This irregular galaxy has the initial appearance of a faint, mottled, stain on the velvety background of the night sky. Its shape is that of an elongated, slightly curved triangle, wider toward the north and concave toward the west. A few faint stars are superimposed on the faint glow, and many more are scattered across a rich field of view. Mottling is apparent, even at low magnifications, with slightly brighter patches north and south of center. Knowing that this Local Group member has a number of large HII regions, I tried to tease them out with Lumicon OIII and UHC filters. The results of this experiment were inconclusive at this magnification, but unlike most galaxies, which have a tendency toward vanishing with these filters in place, NGC 6822 remained steadily visible in both filters. The planetary nebula, NGC 6818 masquerades as a blue green 9th-magnitude star at the NNW edge of the field.

At 60x, NGC 6822 becomes a little more conspicuous due to the increased image scale and better contrast with the sky background. The mottling becomes more apparent as well in a highly irregular pattern. The brightest portions of the galaxy seem to be concentrated somewhat toward the southern half (near the apex of the triangle). Use of the OIII filter brings out a couple of potential HII regions near the northern edge of the galaxy. They appear nearly stellar in my scope, but an examination of nearly any photograph of this galaxy confirms their presence. (Here are a couple of Hubble photos of HII regions in NGC 6822: Hubble-X and Hubble-V.) At 120x, NGC 6822 morphs into a feeble, ghostly glow, difficult to distinguish from the black night sky. Nevertheless, some additional detail may be observed. Most of the galaxy’s light is concentrated in a bar running N-S with faint nebulous extensions to the west and east. The bar itself is broken into several feeble knots of light (possibly due in part to unresolved foreground stars, or stars in the galaxy itself).

4 thoughts on “An Irregularity in the Local Group”