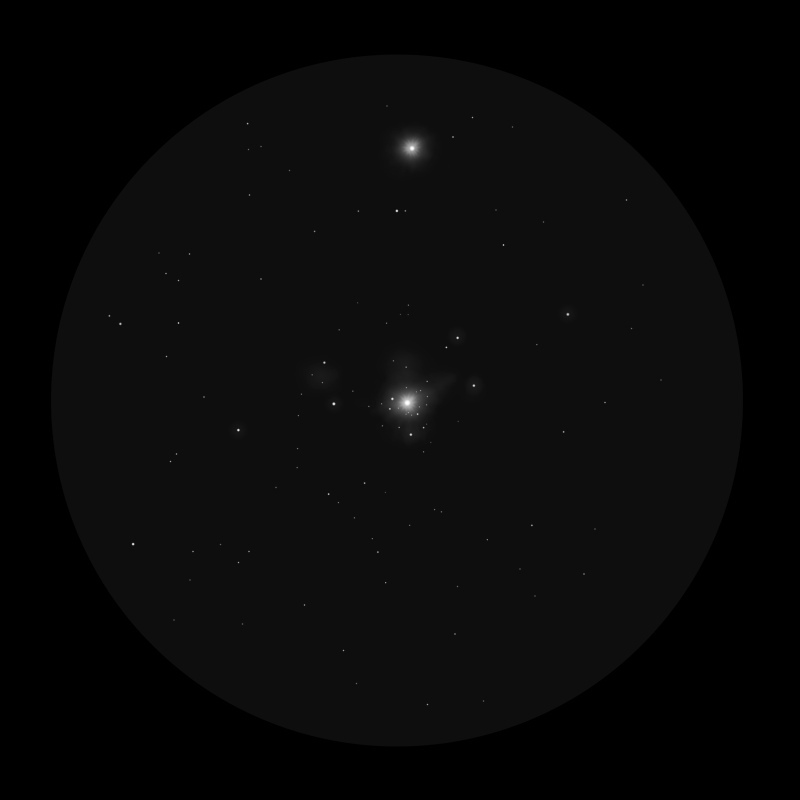 A few months ago, Mark (Novbabies) suggested me to put NGC 2362 on my observing list. The object was unknown to me. The fact that it concerned a rather small open cluster which culminated only a poor 13° above my southern horizon, didn’t excite me at that time. But how wrong was my assumption! The Tau Canis Majoris Cluster turned out to one of the most enjoyable vistas in the sky. The cluster puts the observer to the test. The bright Tau outshines the fainter cluster members nearby. It’s hard to maintain night vision with Tau in the picture. NGC 2362 is a scintillating mix of brighter and fainter stars that swirls around Tau. With averted vision, more spots of unresolved starlight lit up around the cluster. And that’s only my impression with the cluster near horizon. I can only imagine how magnificant the cluster must shine when higher in the sky. Reproducing the cluster on a sketch is another challenge. I’ve made several attemps to try to bring justice to the cluster, but I fell short. I tried to mimic the contrast between the bright Tau Canis Majoris and the swirling group of faint stars around it. I promised myself not to use too much glare on the sketch, but it’s hard to find the right balance. There’s nothing that beats the real thing! So if the sketch pleases you, do try to go out to see the cluster for yourself. You won’t be dissapointed. And thanks Mark for the suggestion in the first place.

One thought on “Tail of the Great Dog”