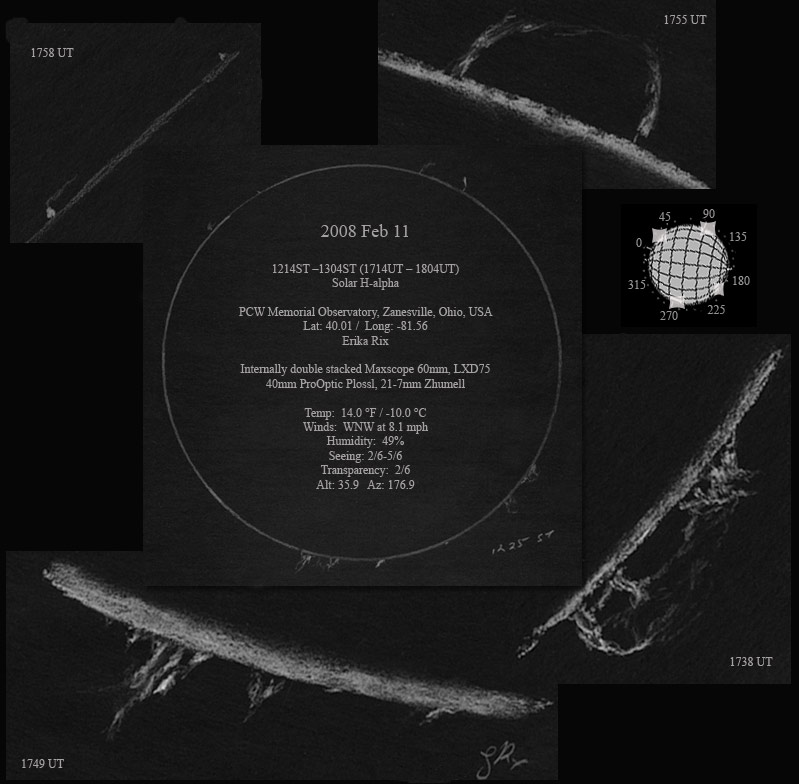 Added -25 brightness, +5 contrast after scanning in color at 300 dpi.  I then turned
the image into monochrome. I scanned initially in color to eliminate cross hashes
that the scanner creates in grayscale. Tilting Sun program used for digital Sun
insert.

At first glance in h-alpha around 10x magnification, only two prominences, SSE and
West, popped out at me.  I didn’t waste much time with the 40mm eyepiece since I
usually use it for initially getting the Sun in the FOV.  At 19x the eastern
prominence looked like two fingers curling towards each other with the southern most
of the two a little brighter.  Taking the magnifications to 57x I could make out a
very faint thin line connecting the two and also noted the strands of contrasted
prominence within the two fingers at 33x. Seeing was much worse at the higher
magnifications but I had moments where it settled for a detailed view.

Moving South at low magnification, the prominence appeared to be two separate
entities with the westerly portion of it looking like a hook or letter C opening up
to the East.  Increasing magnification with the zoom eyepiece, I was amazed to see
with slight averted vision at first several connections between the two.  After
discovering them, I could actually look at them straight on to make out the delicate
network of strands.  It was truly beautiful and very delicate.

A similar thing happened to me with the western set of prominences.  The most
northerly of the four on the western limb grew almost twice in size with a
magnification of around 33x.  The prom itself didn’t grow, but rather my ability to
see the actual size of it with a modest magnification.  The additional length of it
disappeared at 57x.

The little set of prominences at the NNE limb became brighter as the session went
and also became better defined with the lower one (more northerly) turning from a
fuzzy little thumbprint into a thin branch reaching to the one that was more to the
East.

I noticed a dark round dot around 40 degrees on the disk from the East and pretty
much on the equatorial line.  It was very small and tweaking the Etalon did not show
any signs of plage.  Other than that, there were no significant surface details such
as plage or filaments to me visually.  The disk was alive with hairlike structures
and a mottled appearance, very pretty.

One thought on “Dances on the Limb”