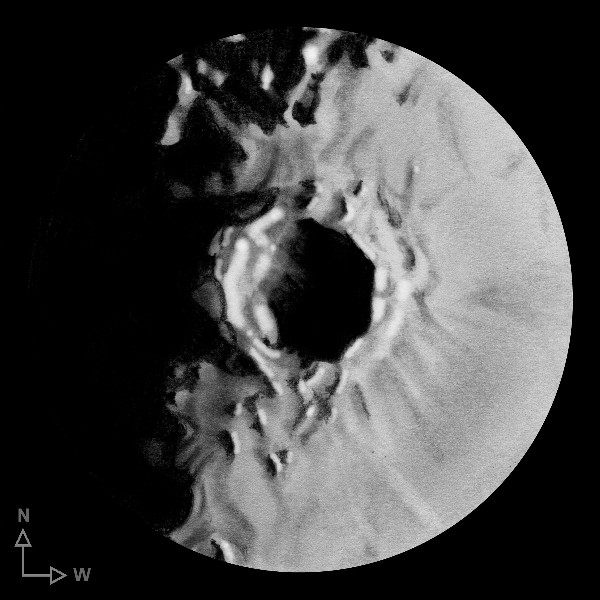 This iconic lunar crater presents a truly majestic sight perched on the terminator of the nine-day-old Moon. The complex features of the crater floor are completely lost in shadow, but the crater walls stand out in fantastic relief, clearly exhibiting the famously terraced slopes. These terraces are believed to have formed from massive landslides of debris dug out by the impact that has collapsed and subsided. The ejecta blanket surrounding the crater is visible on the preceding (sunlit) side; radial features extending from the south-preceding crater wall are believed to be grooves blasted out of the surrounding terrain at the time of impact.

A few small, hill-like features dot the region just south of Copernicus. To the north a more extensive region of hills and mountains known as Montes Carpatus, extends about 400 kilometers in an east-west direction, forming the southern boundary of Mare Imbrium. The roughly circular feature amidst these mountains, due north of Copernicus is 26 km wide crater Gay-Lussac.

Copernicus is named in honor of the great Polish astronomer Nicholas Copernicus whose heliocentric theory of the solar system published in De Revolutionibus Orbium Celestium provided one of the cornerstones of modern astronomy. The crater itself has a diameter of 93 kilometers, and a depth of 3760 meters. Copernicus is noted for its dramatically terraced walls, relatively flat floor and a group of central peaks (with heights up to 1200 meters). The ramparts of the outer walls rise 900 meters above the surrounding plain of Mare Insularum. Only 800-900 million years old, Copernicus is relatively young by the Moon’s standards and remarkably well preserved.