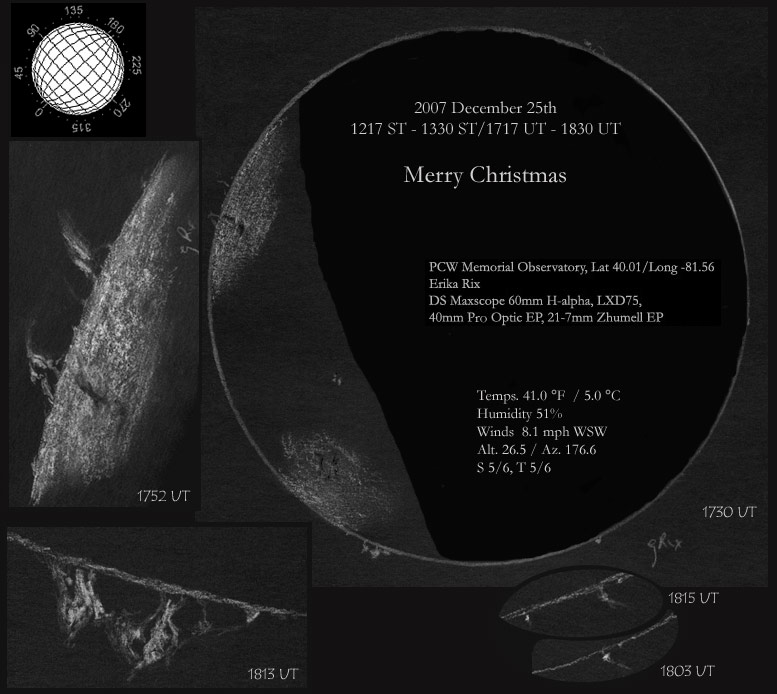 It’s been awhile since I’ve been able to observe, but I was fortunate today to get
out behind the Maxscope to soak up a bit of Sun in the observatory.  Even with the
low altitude of the Sun at 26.5 degrees, the winter is still my favorite time of
year for solar observing.

In the ENE region just inside the limb was a short, but thickened filament visibly
reaching out beyond the limb with two hairline branches, forming an intricate
network of prominences.  At lower magnification, this filament looked like two
separate sections.  Increasing magnification from 19x to 57x, the outer portion of
this filament looked like an elongated “X” with hair-like branches connecting to the
inner filament that swooped to the north.  The prominences consisted of two
brighter, almost “A” shaped areas with several very faint, wispy lines reaching out
to each other as well as other areas of the limb edge.

Adjusting the outer Etalon, I observed a network of hairline fibrils across the disk
that, along with spicules, made a beautiful show of dark mottling across the
Chromospheric network.  There was an area of plage to the NE quadrant of the solar
disk.  It was separated into two sections, at times looking like three, with a few
very tiny dark dots around it.  I didn’t get out my white light filter for
cross-reference, so am not sure if these dark dots were actually pores.

Reaching further NNW, were more filaments, much thinner than the NE filament, but a
little more obvious than fibrils. And then off the limb was a very bright prominence
(at the bottom left of the sketch) that at first glance looked like a pair of cat
ears peeking over the limb.  The peaks of it first appeared to be swaying to the
East, but then forty-five minutes later, the two peaks turned toward each other.
Bumping up the magnification allowed me to see the amazing intricate structure of
this prominence.

To the WNW, a tiny little round prominence formed. It was very bright and dense.
Over the observation period, it reached out in a spraying fashion.  I thought this
one would change faster or maybe even break off or collapse before I called it a
day.  But the prominence stayed the same, only growing a few more tiny fingers off
the limb around it.

There was only one other significant prominence, located to the SE, and several
spicules reaching out from the limb.

The sketch was done on black Strathmore Artagain paper and a combination of white
Conte’ and Prang pencils, sharpened piece of black charcoal, and a white Conte’
crayon.  I sprayed it with a fixative afterwards.

Post processing after scanning involved -24 lightness, +15 contrast and then just
cropping and moving the sketches around for the finished collage.

One thought on “A Solar Christmas”