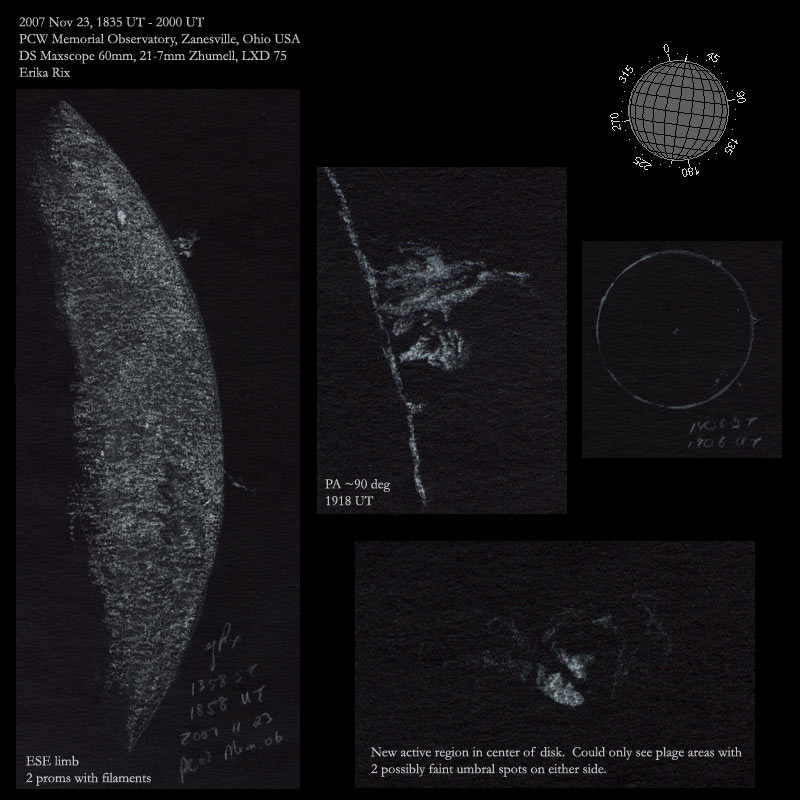 Well the new active region doesn’t appear to have a designation yet (or even if it will), but I was able to make it outside for a few hours to observe. It was only scattered clouds during the observation and a little windy and chilly. But with the Sun at a very low altitude of approximately 27 degrees, it was still a struggle against time to observe in both h-alpha and white light before the trees obscured by view.

Paul opened up the observatory for me and by the time I got my scopes switched on the LXD, he was coming in with a cup of hot tea for me and Riser was curled up in a ball at my feet on his blanket.

The first thing I noticed in the Maxscope was a small bright plage area almost dead center in the solar disk. Bumping up the magnification, I found that it was actually broken off into two sections with fainter “arms” reaching to the east and west of it. There were hints of two darkened spots on either side of it, but I couldn’t confirm it in that bandwidth.

There were three areas of prominences on the Eastern limb, two that are included in the close-up sketches. On the western limb, there were just a few very tiny areas that looked like little spikes.

Just north of the prominence at approximately 90 degrees was a bright patch of plage, almost oblong with the western edge outlined a slightly darker hue. A very thin line of filament branched inward from the limb just north of the 90 degree mark, but could not see it extend outward off the limb against the dark background.

The prominence on the 140 degree mark had a fairly broad sectioned filament running north to south about 15 degrees inside the limb. It was broken into three obvious sections as well as a few very thin lines of filament in the same area.

After a brief few moments enjoying the countryside view from the drop down southern wall of the observatory, I grabbed my clipboard, a few pencils, my empty cup of tea and marched off to the house in my slippers and knitted hat, with Riser following close behind.

The ETX is stored in the house for a few reasons. The observatory isn’t quite big enough to house all the scopes plus it’s easy access for white light viewing to just drag the already set up scope outside from the living room.

Within minutes, I was sat behind the ETX with my sketchpad on my knee, recording what the new active region looked like in white light. There were two dominant smaller spots with an additional fainter spot just off of the larger one. Then, reaching out to the other side of the spots were long thin faint lines. I didn’t notice faculae, but I imagine the dark lines may have been the contrast of border from faculae.

The views were slightly softened today, so it was difficult to view granulation, but limb darkening was very noticeable. 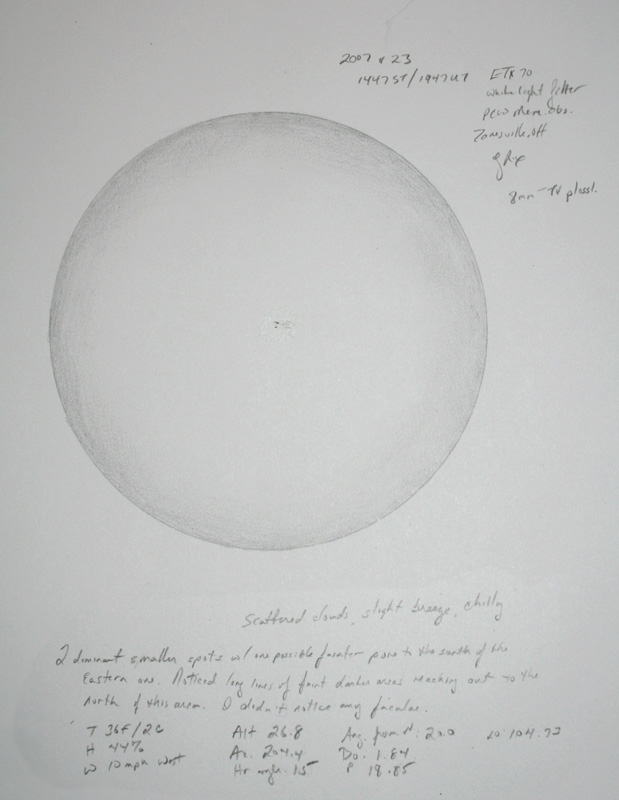 One thought on “Solar Cornucopia”