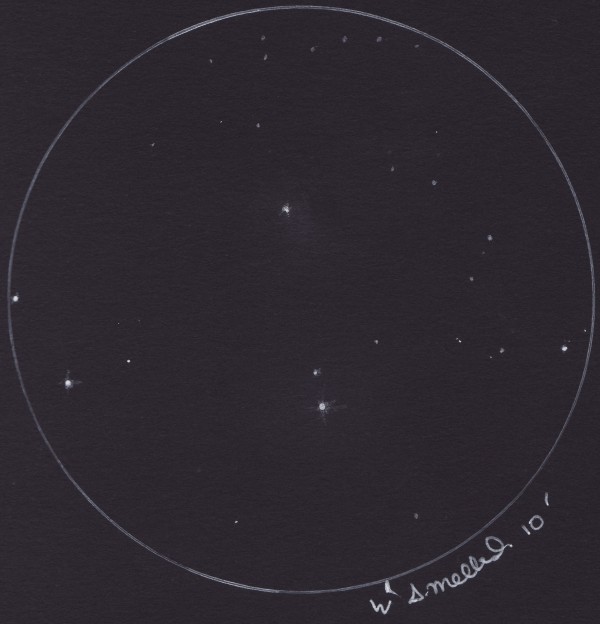 This somewhat mysterious reflection nebula was discovered by John Hind in 1852.
It began to fade in 1861 due to the wide fluctuations in brightness from the illuminating star T Tauri.
By 1868 it had disappeared from view to even the largest telescopes.
It was not observed again until 1890 when Edward Barnard and Sherburne Burnham managed to locate it.
Since the 1930s it has been gradually brightening but remains an observational challenge to deep sky observers.

In my 56cm dob the nebula could only just be seen as a diffuse patch about 1.0′ x 0.8′ in size just of to the lower right of T Tauri (top star).
Whether you can see it or not will depend on your monitor screen.

T Tauri is an irregular variable star around 600 ly away that can range from magnitude 9.0 to 14.0 in brightness.

I also noticed that the mag 8.4 star HD 27560 towards the bottom of the sketch seemed to have a very faint haze around it, which was either some light fog on the eyepiece, or the region around it may contain an amount of interstellar dust.

Incidentally a nebulosity was reported by Otto Struve in 1868 and known as “Struves Lost Nebula” in the vicinity of Hind’s Variable Nebula and given the catalogue number NGC 1554 by Dreyer.
The nebulosity was not seen by observers after Struve’s discovery and has not been located since.
Some Catalogues such as Sky Atlas 2000.0 group NGC 1554 and NGC 1555 together as a single object.
The Palomar Sky Survey plates do not show anything at the reported position.
It is possible that the Lost Nebula may have been a transient portion of the reflection nebula in this section of the sky.