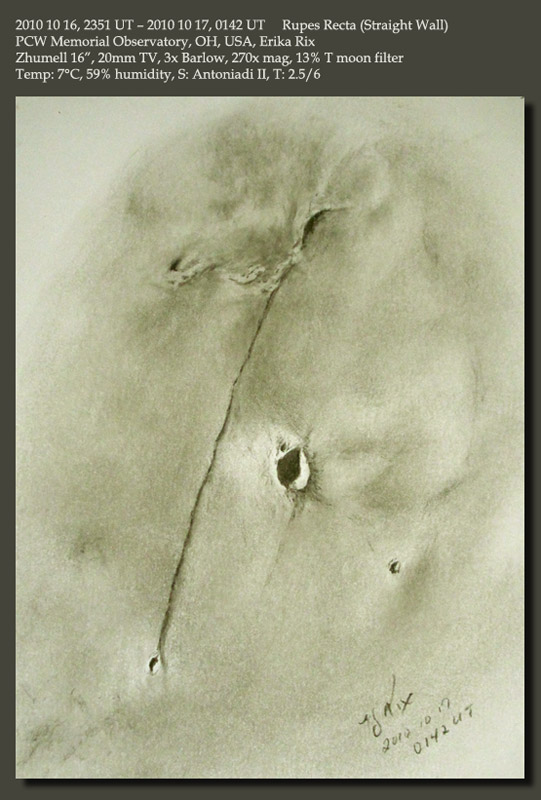 Located in Mare Nubium, this scarp, also known as the Straight Wall, was
apparent by the shadow cast from illumination from the east. The shadow
wasn’t very wide, but rather narrow and smudging to the west. The
eastern side of it was crisp and sharp. During the waning phase, this
same feature would appear as a white line from the illumination coming
from the west. The slope incline is ~30-40° (ref. Virtual Moon Atlas).
For a good comparison between the waning and waxing phases for this
feature, please have a look at this site:
http://www.astrosurf.com/lunascan/Rupesr.htm

Lightened areas around Birt (Copernician period) made a path from the
crater to the fault, showing off Birt A as well as a “V” shaped area
nestled between Birt and the companion craters K, J, and H (you will
have to look at an atlas for those craters as I wasn’t able to see them
during my observation last night).

The ridges to the south of Rupes Recta formed what I always pictured as
a scoop, make the ridge and the fault look like a ladle. Funny that a
woman should think of it a ladle whereas 17th century selenographer
Christiaan Huygens reckoned it looked more like a sword (ref. Modern
Moon, page 147). A lightened area to the south (top of the scarp in my
sketch from last night) outlined the circular ridge of Thebit S. It’s a
pity it wasn’t more defined during my observation. What I found very
interesting to observe was the darkened cirlce that Rupes Recta and the
wrinkle ridges to the west formed. I believe the ridges to the east
outline the ancient crater that Chuck Wood dubbed Ancient Thebit in the
Modern Moon.

Rima Birt looked more like a thin shadow than a rille. Looking back to a
sketch I rendered in 2005 using an LX200 Classic, not only was this
rille visible, but I also caught Birt E, which I didn’t see during last
night’s observation.