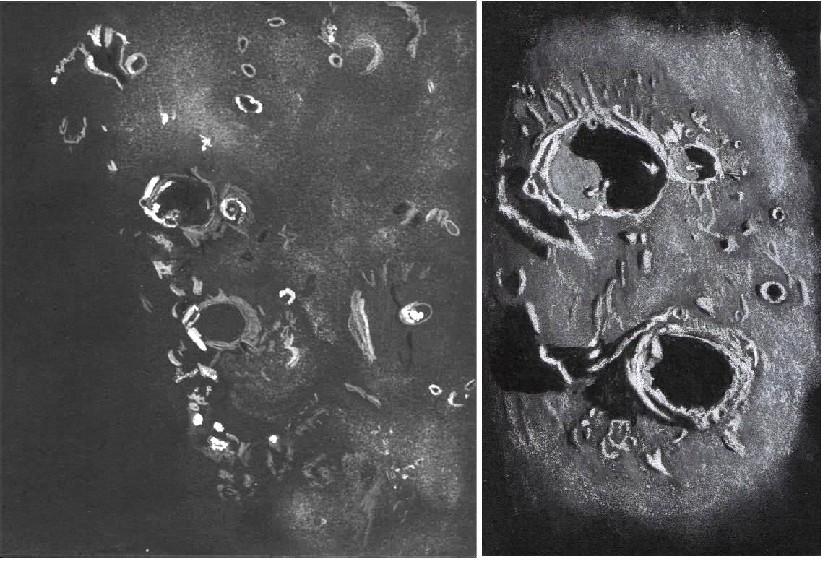 Eudoxus and Aristoteles
By Dale Holt and Frank McCabe

During my morning and Dale’s afternoon we were communicating back and forth by e-mail about sketching during our respective evenings. We realized at some point that we could possibly sketch the same lunar target albeit at slightly different times. We selected two dominant craters near the terminator, namely Eudoxus and Aristoteles.
Dale began sketching first with the moon in his western sky and with very little time he did a remarkable job in only 40 minutes using a 6 inch Apo refractor.
When Dale had finished his sketch and completed another of planet Saturn that is when I got started.
I was using a 10 inch dob and much higher magnification. I rotated my sketch 180° so north would be up as in Dale’s sketch. I should also add I spent more than 3 times as long sketching so I naturally captured more of the two craters whereas Dale got the wide view including the environs of Mare Frigoris.
Aristoteles is 87 km in diameter and a large Eratostherian era crater with just some minor central peaks and steep walls. Note the shadow changes on the floor because of the time interval between these sketches. Eudoxus is slightly smaller (70 km.) and younger as a Copernican era impactor and has steeper walls with shadow changes on the floor that are a little less evident.
That was fun let’s do that again soon when we both have equal time.

Warmest regards from both of us
Dale Holt and Frank McCabe