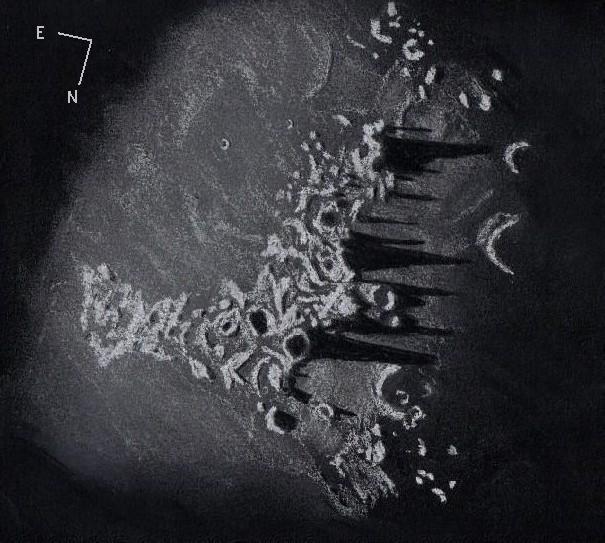 On Tuesday evening I thought I may spend some time observing Mars and perhaps make a sketch if the seeing was good enough to move to high power. Before pointing my scope at Mars I decided to take a quick look at the moon to see if there was anything interesting going on such as light rays of sunlight illuminating and creeping across the floor of a large crater. I soon forgot about Mars and raced indoors to switch sketching media. I know I can sketch twice as fast using white on black and speed is what I needed to capture the quick changing scene along the terminator. What I spotted was the dramatic shadows of the Caucasus Mountain peaks across the floor of Mare Imbrium. I quickly drew on the black Canson paper a faint, white Conte’ pastel meandering line right at the western edge of the Caucasus mountains and roughly outlined the shape of the shadows before any change in length occurred. At this point I felt I could continue sketching in the normal manner. Craters at the bottom of the drawing such as Cassini were not as light struck when I started this sketch as they appear here since I sketched top to bottom. It took about 75 minutes to complete the basic rendering and I spent an additional 15 minutes cleaning smudges and erasing mistakes that were obvious to me.

Mare Serenitatis is the southeastern illuminated region of the sketch. Over to the terminator on the western side of the view are the two “C” shaped craters Autolycus and Aristillus. Among the shadows in the middle of the sketch is crater Theaetetus and directly below the last long shadow is part of crater Cassini and some of the peaks of the lunar Alps.

I had some fun with this one.

4 thoughts on “Shadows of the Lunar Caucasus Mountains”