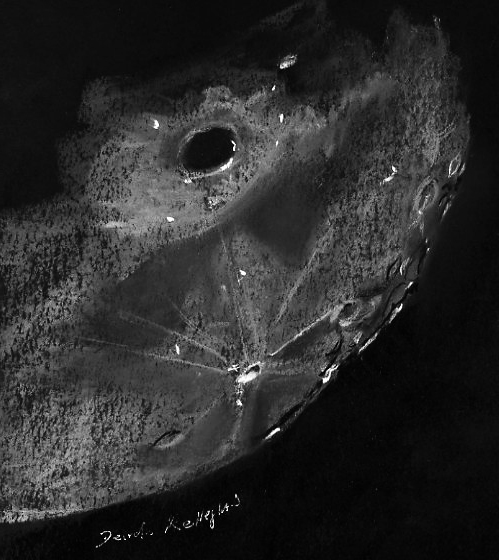 South is up in this sketch because that is the way I viewed it and sketched it. Pastels & Conte on black paper.

Our beautiful Snow moon was 99 .9 % drenched in the suns light when I went observing on the last day in February 2010. Along the NW limb several craters were on view in the libration zone, it was my intention to make a sketch of these elusive features. They presented on the limb as dark deep long shadows edged with sharp bright lines against the blackness of space.

However while these were interesting, my eye was magnetized toward the brightness of Goldschmidt and its ejecta rays, giving great form to the area. Several of these long dark lines were also on view on the edge of the limb close to Goldschmidt and Herschel . It was so visually interesting to observe the contrasts on the limb when the moon was so full, a black and white merry dance of slow movement and rich structure.

Plato never looked so dark and flat ,its black floor absorbing the suns light when most of the surrounding area was throwing it toward my eye. I adored the tiny pure white rim sections singing in the light. My sketch wandered across part of Mare Frigoris , the area around Plato and includes part of Mons Teneriffe .

5 thoughts on “Goldschmidt Rays and the Moon’s North Limb”