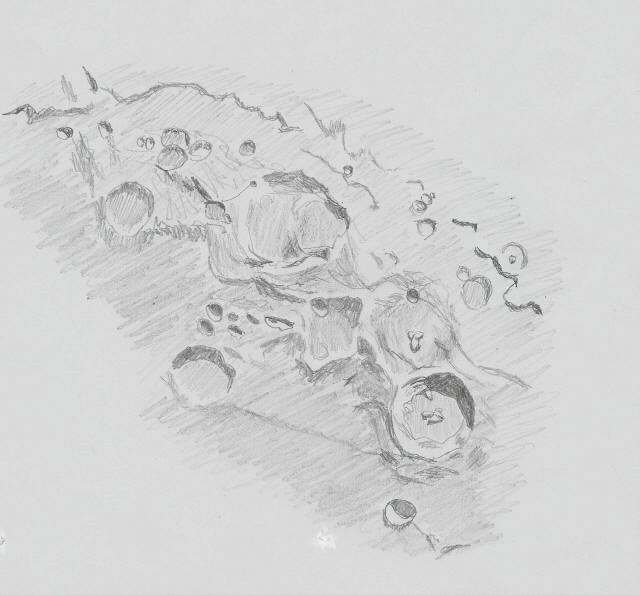 Rim of Mare Nectaris,
with craters Theophilus, Cyrillus and Catharina, and Rupes Altai
Sketch and Details by Peter Mayhew
Hover mouse over image to view labels.

The sketch was made with graphite pencil on white paper at the eyepiece. My instrument is a Skywatcher Skyliner 152mm f8 Dobsonian, and I used a 10mm eyepiece and x2 Barlow. The moon was day 19-20. The sketch took about one hour, during which time I had to reposition the scope about 100 times as the earth’s rotation took the target out of view. The famous trio of craters, Theophilus, Cyrillus and Catharina lie on the edge of the Nectaris impact basin. Theophilus is the youngest crater of the three, an estimated billion years old with a large central peak with multiple summits, 1500m high. It has an impressive terraced rim. Cyrillus is much older (3.5-3.8 billion), and retains a central peak too, unlike Catharina to its north. To give a sense of scale the latter is 104km across. The landscape all around is dominated by the Rupes Altai, a scarp 1000m high and 500km long. This marks the ripples in the crust formed by the Nectaris impact. Mons Penck (4000m high) forms part of its northern extent. Low ridges and hills throughout the region are aligned with the impact, nearly 4 billion years ago. Three fruity craters and a fascinating reminder of the moon’s dramatic past.

3 thoughts on “Rim of Nectar”