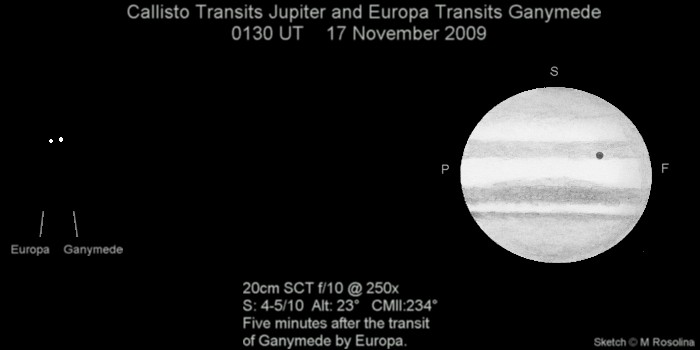 Because of the geometry of Earth’s orbit in relation to Jupiter’s orbit, this has been a very good year for seeing transits across the Jovian disk. Not only have there been numerous transits of the Galilean moons and their shadows, the moons themselves have been transiting and occulting one another as seen from our vantage point here on Earth.

In this sketch, Europa has just completed an annular transit of Ganymede, passing in front of the larger moon but not blocking it completely. Because of Jupiter’s low altitude, I was unable to use high enough magnification to see any detail of the transit beyond watching the two bright dots move towards each other, merge, and then move apart.

At the same time, Callisto (the largest Galilean moon) was transiting in front of Jupiter. Unlike the two smaller moons, Io and Europa, which tend to disappear from view after they cross the Jovian limb, Callisto (and Ganymede) usually can be seen against the cloudtops due to their darker albedo. [All of the moons’ shadows can be seen in transit given adequate seeing conditions.]

This sketch of Jupiter was done at the eyepiece using 2B and 4B graphite pencils on white copy paper. After scanning, I set Jupiter against a black digital background, placed the positions of the satellites from field notes, and added the text.

I hope you enjoy this view of the King and his consorts and get a chance to see one of these transits yourself before the giant planet disappears for the year.

2 thoughts on “Dancing in the Royal Court”